What do Hobby Lobby, a real estate agent, and a dental office have in common? Colorado said they're doing non-critical business during COVID-19 and now must stop. 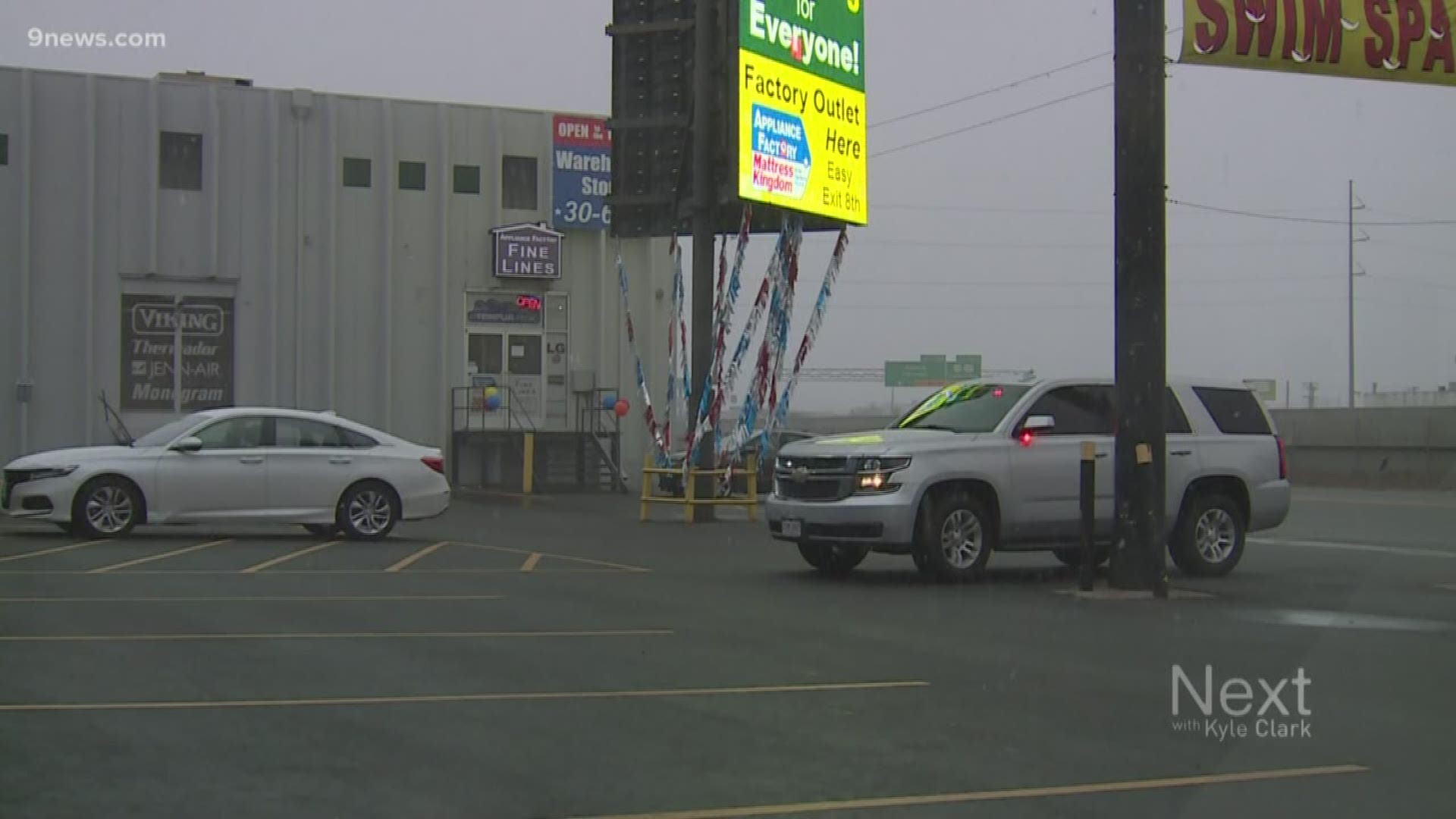 On Wednesday night, Hobby Lobby's founder, David Green, was sent a letter in Oklahoma City from the Colorado Attorney General's Office warning the company that it was violating the executive order by Gov. Jared Polis (D-Colorado) and the Colorado Department of Public Health and Environment stay-home requirements.

"You are directed to immediately close all Hobby Lobby locations within the State of Colorado," the letter stated.

According to a spokesman with the Attorney General's Office, Hobby Lobby agreed not to reopen in Colorado on Thursday.

Hobby Lobby has not responded to an email earlier this week. 9NEWS sent another email on Thursday.

Three other similar letters have been delivered to Colorado businesses.

On March 26, the president of Comfort Dental received a letter from the Attorney General's Office.

"It has come to the attention of the Colorado Department of Regulatory Agencies through credible and significantly alarming reports that several, and perhaps many, Comfort Dental franchises in Colorado have this week been treating patients by providing voluntary or elective surgeries or procedures, in direct violation of Executive Order D 2020 009, issued by Gov. Jared Polis on March 19, 2020. From these reports, it is apparent that various Comfort Dental franchises have been failing to restrict their practice to emergency or life-saving needs but instead are continuing to engage in elective dental procedures, as well as not ensuring proper social distancing," the letter stated.

Polis signed an executive order ending voluntary or elective surgeries from March 23 through April 14, at the earliest.

Procedures that are allowed involve:

"Among the reports we have received are indications that your franchisees have been failing to maintain proper social distancing between clients in the franchises’ waiting areas, sometimes as a result of your franchisees apparently scheduling multiple concurrent appointments and thus leading to crowded waiting areas," the letter stated.

On Monday, a dentist office in Aurora received a letter to abide by the executive order that temporarily stopped all elective and non-essential surgeries.

According to the letter, the Attorney General's Office received a complaint that Dr. Roy Theriot had patients receiving voluntary or elective procedures as recently as March 26. 9NEWS included his name in this report because the office included it their statement.

"From this report, it is apparent that your Aurora practice failed to restrict patient care to emergency or life-saving needs," the letter stated. "The information we have received to date indicates that your Aurora dental practice provided general care on March 26, 2020 to multiple patients, and that your receptionist appears ready to schedule additional voluntary or elective procedure appointments if contacted."

9NEWS contacted the dentist's office and left a message with the person answered the phone.

"That was pretty bogus," the call taker said of the state's letter. The office later sent an official statement:

"Dr. Theriot wants his patients and colleagues to know that he is in compliance with the Executive Directives by the State. We have done our best to handle requests by patients to alleviate their fears of pain and further morbidity.

We prescreen all patients and obtain a special COVID-19 emergency consent form and have documentation of all procedures performed. Being on call for three very busy dental practices and the additional requests from others has created more pressure to handle emergent care and be under the scrutiny of those who may not be aware of the shortage of these services.

The earlier interpretation of essential: non-essential care created some confusion when the patients presented with dental disease or issues that were emergent in nature.

We have an obligation to our patients to alleviate pain and infection and damage that cannot be reversed."

On Tuesday, a RE/MAX real estate agent was sent a letter after a complaint that residents were asked to leave a home so it could be shown to prospective buyers.

"The Colorado Department of Law has received a complaint that you are requiring residents to leave their home to facilitate showings of the property. Specifically, the complaint alleges that you are requiring these residents to leave their dwelling so that you can market the real property through public showings and open houses," the letter stated. "[The executive order] does not define real estate marketing services such as showings and open houses to be a critical service, a critical business or a necessary activity that would be exempted from these Orders’ requirements."

"I would never demand that people leave their house. This was really before the city-wide quarantine. There really wasn't any set rule on leaving the house or not. This was before we had any kind of regulations on that," the real estate agent told 9NEWS. "We've changed our approach since then, to make it more cautious."

Local health departments are handling complaints about businesses violating the state's stay-at-home order, like in Denver, where sheriff's deputies showed up at an Appliance Factory store on Zuni on Thursday, after Denver cited it three times for violating city policy. Appliance Factory has said it is an essential business, but the city disagreed.

The attorney general's office can handle the complaint when a local agency is unable or unwilling to enforce the order. In the case of Appliance Factory, the business said it plans to make a court filing on Friday.

Next with Kyle Clark and 9Wants to Know have received numerous emails and phone calls about stores that are allowed open because they're deemed critical, but sell merchandise that is not critical or essential.

"I saw a couple shopping for patio furniture. I saw a couple browsing for odds and ends and they had their two elementary-aged kids with them," said electrical contractor Terry Kratzer. "There was one couple that was shopping for plants, so in my opinion not 'essential items' that they need to be out shopping for right now."

Kratzer's job as an electrician is deemed critical by the stay-at-home order. Hardware and building material stores are, as well. Those stores also sell non-essential items, which are still for sale.

In Summit County, however, the public health department has restricted critical businesses from selling non-essential items, while still allowing the sale of food, medicine and other essential merchandise.

Should that be the way statewide?

"That's a sticky one. I can't say there's a better way to handle this than what they already are," said Kratzer. "It's definitely a tough situation to say what's right or what's wrong to handle it."

RELATED: 'The physical and emotional toll is evident': On the front lines, Colorado doctor volunteers in New York