The state health department's chief medical officer noted Colorado is on track to run out of ICU beds in December. 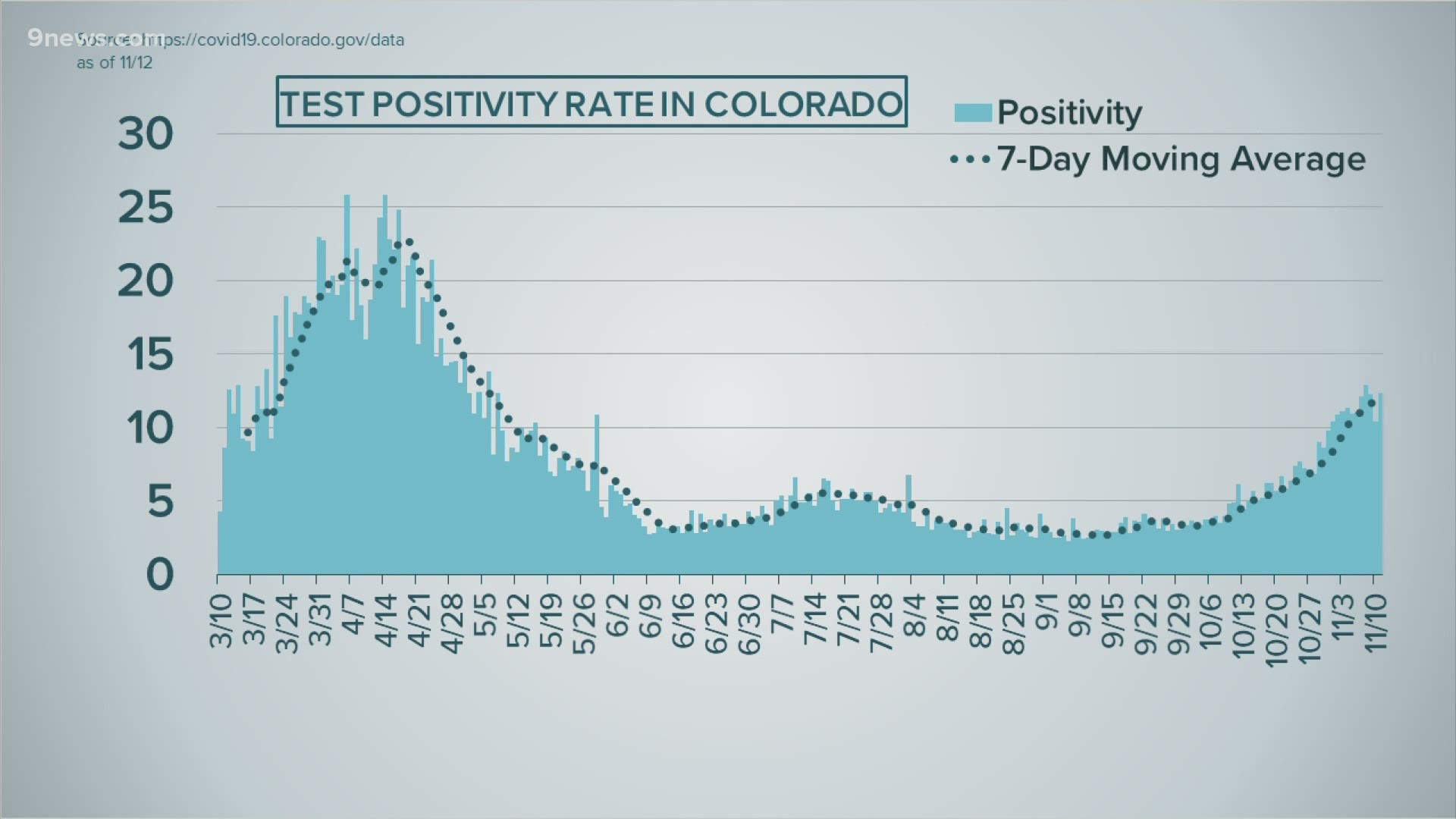 DENVER — State officials presented a grim picture of Colorado's COVID-19 situation at a media briefing Thursday afternoon, but also pointed to a light at the end of the tunnel.

Dr. Eric France, chief medical officer for the Colorado Department of Public Health and Environment (CDPHE), said cases of COVID-19 have increased at an exponential rate over the last month.

France said he's hopeful that recent mitigation measures, such as limiting gathering sizes and counties moving to more restrictive levels on the state's COVID-19 dial, will be reflected in virus statistics soon. He said the rate of increase in cases and hospitalizations could slow as soon as next week, then move to a plateau.

Colorado's seven-day positivity rate stands at 11.68%, according to the most recent data provided on CDPHE's website. The number of current hospitalizations is 1,183.

France reiterated that Coloradans must limit their interactions to people in their own households, maintain six feet of distance from others and wear masks.

France said private gatherings are a concern as a source for the spread of COVID-19.

He said he's also concerned about the scenario of having to decide who gets ICU beds once capacity is met. Such decisions would be made under the state's crisis Standards of Care. If current trends continue, that situation could happen in December, France said.

France said he could imagine a regional stay-at-home order going into effect if it needs to happen.

Kevin Klein, the director of the Colorado Division of Homeland Security and Emergency Management, said the state has three alternative care sites that can be operational in two to four weeks if hospital capacity is exceeded.

As for the light at the end of the tunnel, as he called it, France noted recent good news regarding the development of a vaccine for the novel coronavirus. Doses are expected to be available to the first round of recipients as early as late November or early December, he said. That group will include healthcare workers, first responders and nursing homes.

Other essential workers and high-risk people will come next, France said.

He said the vaccine could be widely available as early as March, but it could take months before everyone who wants it can get it.

"There's a lot of reason for excitement," France said, "at the same time, though, recognize that each of us will be at a different place in line when it comes to receiving this vaccine."

RELATED: US reports most single-day COVID-19 deaths since May