"It’s kind of just like snowballing of all the people that have taken care of me in the past, so I’m trying to take care of them," he said. 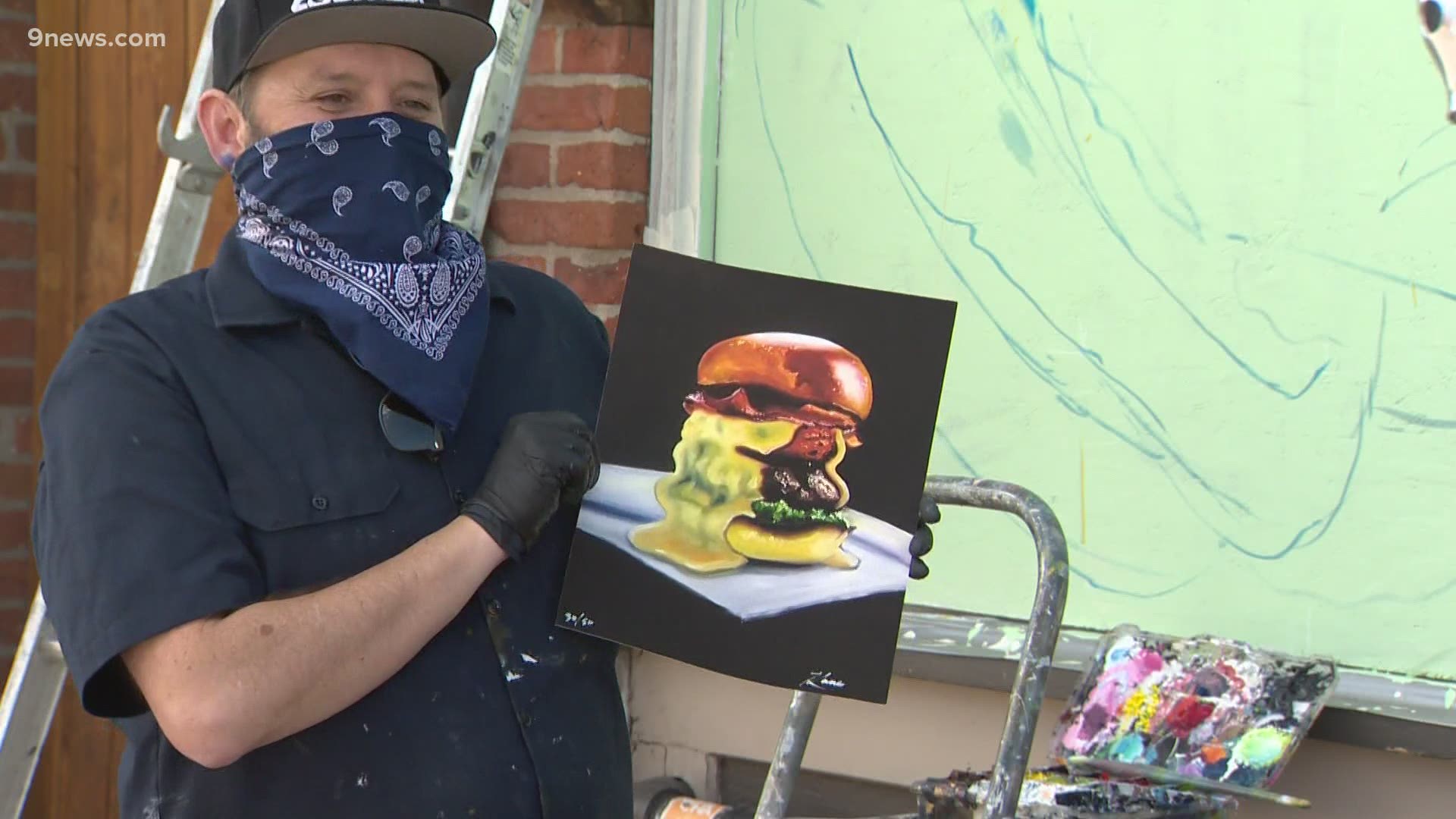 DENVER — It's easy to become mesmerized with every brushstroke as Patrick Kane McGregor, known more commonly as Kane, paints a large-scale, colorful dog on a plywood-covered window.

Painting man's best friend has become a signature for McGregor. He usually paints his own dog, Boug, an English bulldog who McGregor said sadly passed a few years ago.

Credit: Bryan Wendland
Most of Kane-McGregor’s pre-Coronavirus murals feature his late dog Boug. His murals are all over the country, and his art has made several appearances during the Crush Walls Festival.

But on Tuesday, it was a different dog McGregor was fixated on.

On a boarded-up window at Meadowlark Kitchen in the River North Art District (RiNo), McGregor worked on a mural of a pug named Winston. The dog in North Carolina has recently been making headlines as the first dog presumed to have tested positive for COVID-19.

"This was a spur of the moment thing but I looked in the news and there was the first dog that got the coronavirus," McGregor said.

McGregor's painting portrayed the dog as wearing a face mask as a way of "spreading the word of safety and [personal protective equipment] for everybody."

However, McGregor's art is doing more than just raising awareness. It's helping to build income for the businesses now covered with his murals. At one point, businesses like Meadowlark Kitchen were McGregor's first supporters.

"It’s kind of just like snowballing of all the people that have taken care of me in the past, so I’m trying to take care of them," he said.

With the help of Like Minded Productions, a print shop in the RiNo neighborhood, McGregor is selling prints of the paintings he's created around the city.

Meadowlark Kitchen's owner Casey Karns said they've received about $7,000 from the art sales, the only income for the restaurant since they had to completely close their doors during the COVID-19 pandemic.

"Basically, the only business we have right now is selling Patrick’s prints," Karns said.

Karns said his restaurant isn't able to do food deliveries or curbside pick-ups because their chef has Type 2 diabetes and Karns said, as the boss, he would never want to risk his team's health.

"Until we have some answers on how to be responsible and keep everybody safe, we’re going to stay closed until then," Karns said.

Denver muralist gives back to businesses that helped him

1 / 9
Bryan Wendland
Most of Kane-McGregor’s pre-Coronavirus murals feature his late dog Boug. His murals are all over the country, and his art has made several appearances during the Crush Walls Festival.

McGregor hasn't started selling prints of his masked-dog paintings. He said he hopes he never has to.

"Hopefully, we’ll get out of this thing and I won’t have to paint any more dogs with masks and take the masks off," he said.

Money from McGregor's prints are also going to Pony Up near Coors Field as well as Atomic Cowboy.

Credit: Bryan Wendland
He’s painted billboards and massive walls on multi-story buildings across the country. Now, Kane-McGregor is giving back to Denver businesses that have helped him in the past.