How will Colorado's mask order be enforced?

Many Coloradans are compliant already, but business owners shared stories of defiant customers. 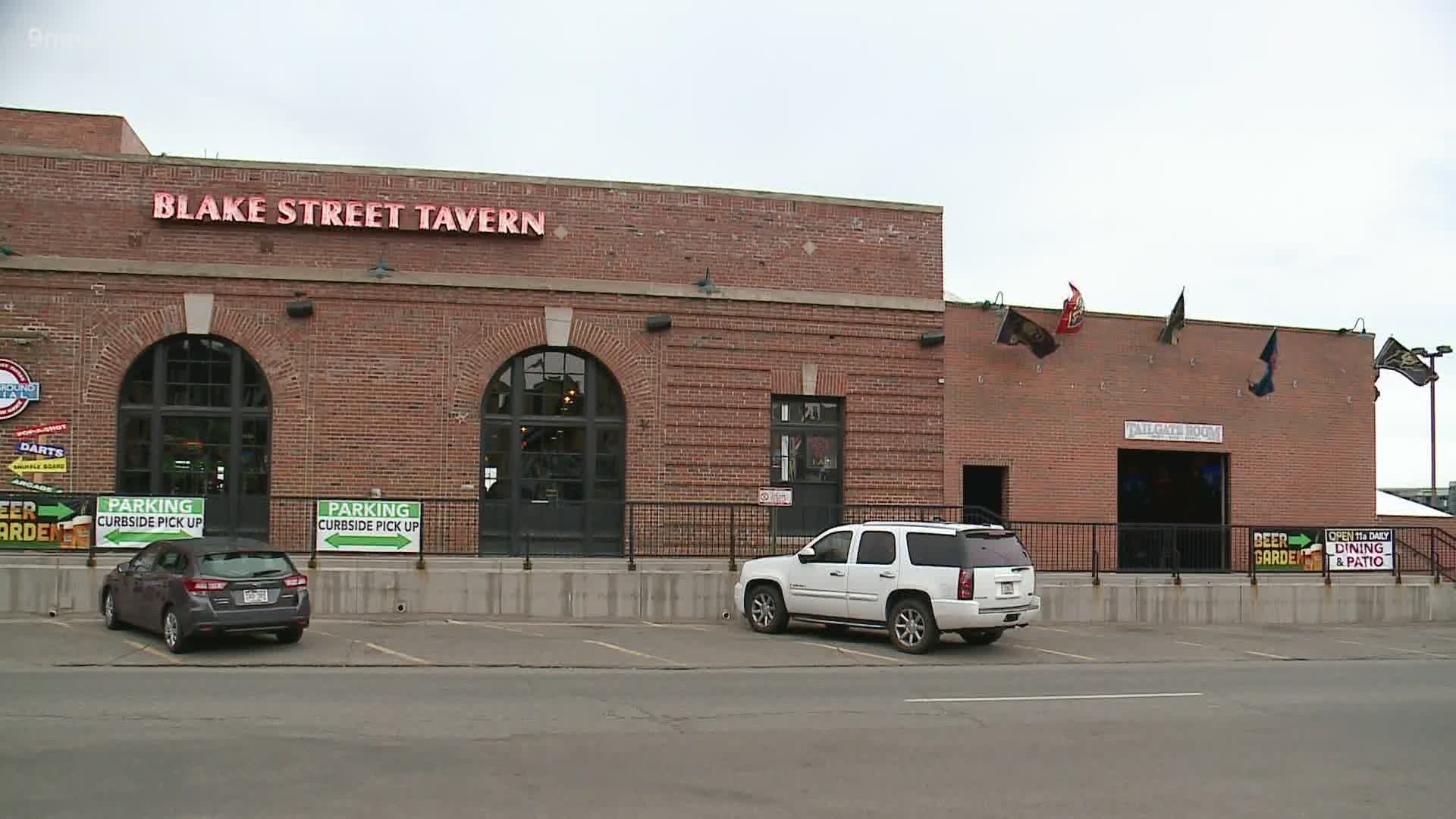 DENVER — Many restaurants and retailers are waiting to see how Colorado's new statewide face mask order will play out inside their businesses.

Often, it’s up to the business establishments to enforce the rules. Many customers are compliant, but some have openly defied mask orders.

Chris Fuselier, owner of Blake Street Tavern, said his restaurant-bar near Coors Field dealt with two incidents just this past week. Denver already had a mask mandate in place, prior to the statewide order.

“Saturday night, we had a group of eight guys come in, none had masks,” Fuselier said, explaining that his team gave the group free masks and sat them at a table.

He said the group refused to cooperate.

“We told them, please, put on your mask unless you’re eating or drinking. They refused to abide, we had to kick one guy out, and then they stopped.”

On Monday, he said they had a group of three customers ignore the mandate. Fuselier said two women in the group eventually left but a male customer taunted the restaurant manager who repeatedly asked him to wear a mask.

“The gentleman went to the front door and was just waving [his hands] like this, ‘hahaha, not putting my mask on!’ And we called the police on him,” Fuselier said. “He left before police got here.”

Fuselier was already worried about the virus affecting his staff and his customers. Now he said he's worried about his team’s safety, too.

“My manger was like, ‘This stressed the hell out of me. Why do I have to deal with this? Why can’t there be more enforcement?'”

Fuselier has been a vocal supporter of a state-wide mask mandate, using his social media account to pressure Governor Polis, and even circulating a petition calling for a statewide mask order.

He said there has been confusion among some customers traveling from outside Denver, who aren’t accustomed to a mask mandate in their community. He said he supports the new executive order that creates consistency across Colorado.

Other businesses have reported customer defiance, even harassment directed toward employees attempting to enforce a mask mandate. The owner of Little Man Ice Cream in Denver said one customer spat on one of his teenage workers. Another customer purposely coughed on the shop's countertop and in the direction of other guests.

Under the Governor’s new executive order, people who refuse to wear a mask in required areas could face civil or criminal penalties, such as being prosecuted for trespassing. If a business doesn’t comply, it risks losing its license

“For now I think we’re just happy everybody is playing by the same rules, and to come into the store, you’ll have to have a mask on – period.”

Howes said CRC expects customers will comply with the Executive Order. Like Fuselier, he said he hopes masks become “a cultural norm.”

The statewide mask mandate does allow for people to forgo a mask if there is a medical reason why that person cannot wear one, though there is not a straightforward way of knowing who is allowed to go without.

The Colorado Dept. of Public Health and Environment explained it like this:

"Individuals who cannot medically tolerate a face covering are exempt from the mask mandate. There is not an exhaustive list of specific medical conditions. Rather, being unable to medically tolerate a mask refers to a person who has trouble breathing or anyone who is unconscious, incapacitated, or otherwise unable to remove the cloth face-covering without assistance, according to the Centers for Disease Control and Prevention."

9Health Expert Dr. Payal Kohli, along with several other doctors, told 9NEWS the list of conditions that would prevent someone from wearing a mask is short. Lung disease could be argued either way -- that it could make it more difficult to wear a mask, or make a mask more necessary. Cognitive impairment and abnormal facial anatomy could warrant talking to your doctor about what you should do. 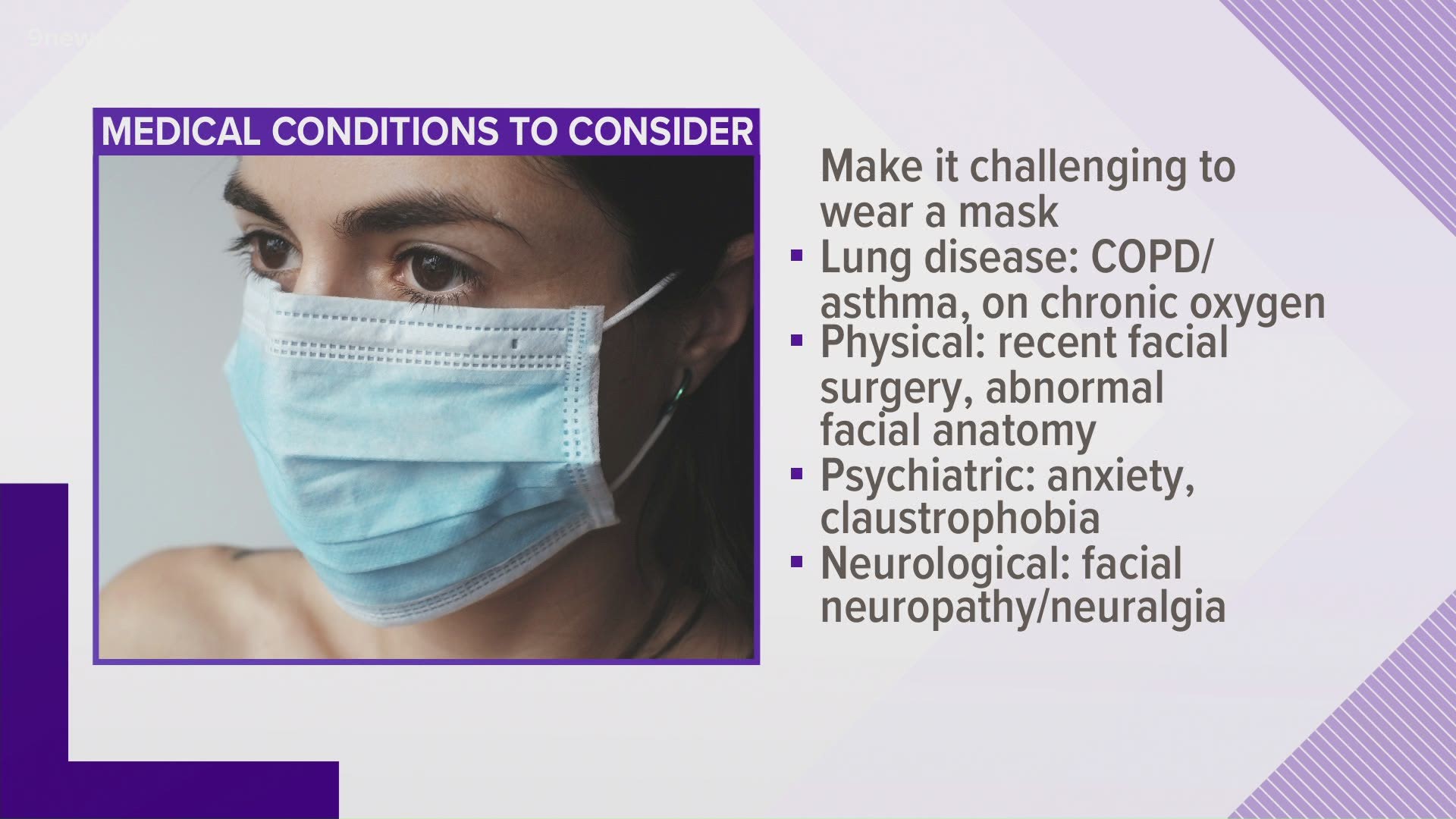 The Centers for Disease Control and Prevention (CDC) said some people who are deaf or hard of hearing may rely on lipreading to communicate but also pointed out that clear facing coverings are available.

People with intellectual and developmental disabilities may have a harder time wearing masks, too, as well as people with some mental health concerns like anxiety and post-traumatic stress disorder (PTSD).

Dr. Ben Miller with Mental Health Colorado said it's not about physically wearing the mask, but that it could be a trigger for some people with those conditions. He said for people who can access help, they could manage it with the right treatment and coaching.

How does someone prove they have an exemption? That answer isn't straightforward either.

9NEWS reached out to several local agencies and heard back from Jefferson County Public Health. They said they are working off the honor system when it comes to navigating medical exemptions and expects the community to do the right thing when it comes to wearing masks.

In a statement the governor's office said:

"No one will question somebody who has a medical condition and we would encourage everyone with a medical condition to speak with their doctor if they can recommend a different kind of mask because there are masks that are easier to breathe through. We also encourage people with breathing or respiratory issues should stay home because they may be at risk of a severe outcome and cannot receive the protective benefits of mask wearing."

CDPHE also said in an e-mail:

"You do not need a written exemption. Someone with a medical condition may tell the establishment that they cannot medically tolerate a mask. But please be aware that if you cannot medically tolerate a mask, you should consider limiting any visits to businesses to protect yourself and others. If you need help getting groceries or other necessities, you can call 211 to be connected to local resources that may be able to help you. Under the Americans with Disabilities Act, businesses may offer reasonable accommodations for individuals with medical disabilities that make it so that they can't wear a mask. This could include offering delivery or call-ahead curbside pickup instead of allowing entry into the building. The CDC recommends businesses post a sign outside that says "Masks Required" and provides a phone number and email address for someone to contact should they be unable to use a mask. Doing this will eliminate the need for an employee to have to debate the situation with an un-masked person." 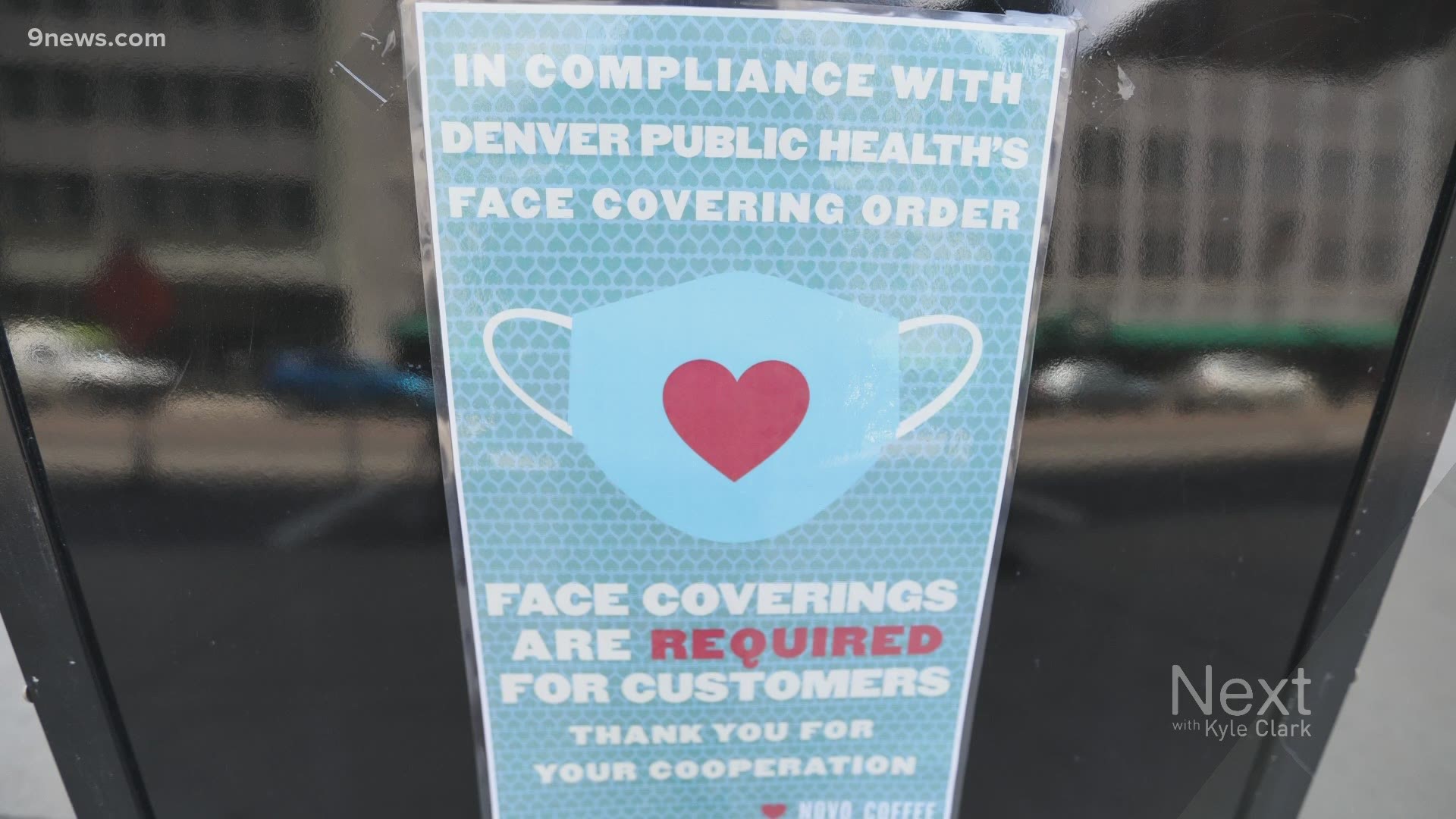