Q&A: Real-time data show how, when and where people in Denver are spending their time 6 months into the pandemic

Compared to April and May, people are spending more time outside the home, but not much has changed between June, July and August, according to Google movement data. 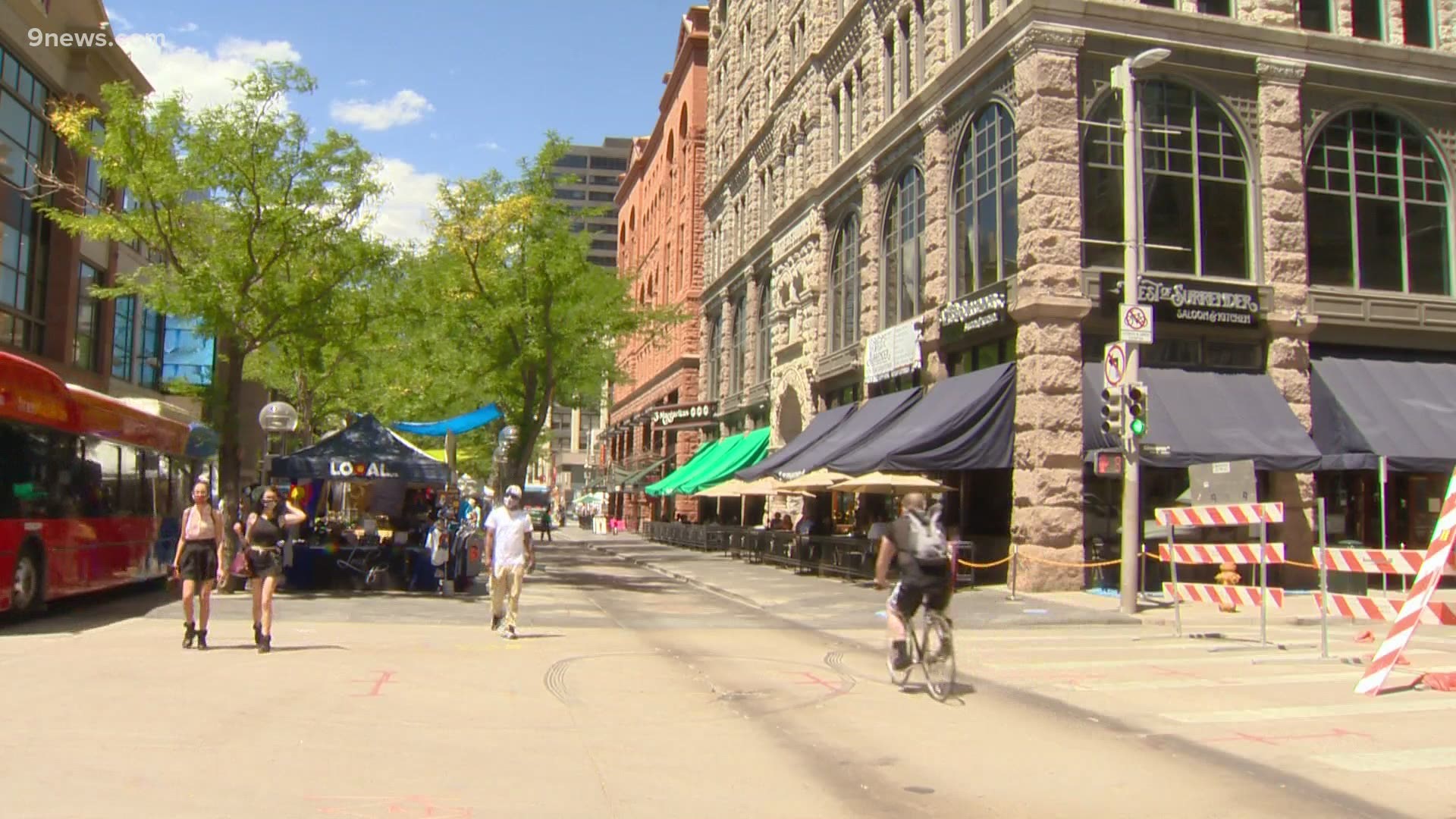 In her last eight years analyzing economic data at the DDP, Emily Brett has relied on indicators that tend to lag a few months behind. Like so many others, the pandemic changed how she approached her job.

"I searched for all the most high-quality, real-time data that I could find that paints the picture of the overall economic health and recovery of downtown Denver and our city as a whole but also consumer behavior," Brett told 9NEWS.

Brett called the latest report, released Friday, "the most positive" she's put together.

"We did see that our Labor Day weekend was really strong downtown. We saw the highest pedestrian traffic that we’ve seen since March," Brett said.

Here's how her report breaks down some of those real-time indicators:

According to data from @OpenTable, Denver diners are beating the country back to restaurants:

We took our questions about the data to the woman behind the numbers.

9NEWS: What is the purpose of the Downtown Denver Partnership?

The data is critically important when we try to get companies to move here and when we work with developers to understand the market and if their product fits the consumer that is in downtown. Knowing the data about downtown is really at the core of our mission in working and supporting businesses downtown. That mission really shifted during this crisis. It was challenging but interesting to search for and find new data that can tell us different information. For example, it’s not just looking at year-over-year employment growth, and year-over-year population growth, and office vacancy rates. It’s really what happened last weekend. Were more people out? It’s a different more granular approach and it’s getting back to the basics of what downtown is."

When and why did you decide to start putting this report together?

Brett: "When I was putting our annual state of downtown Denver report together this April and May, it became abundantly clear that the economic indicators we typically use to track the economic health of downtown were certainly not going to be sufficient in this crisis that we’re all living through. What these typical economic indicators look at is what was happening a couple of quarters ago. Our community and business owners need to know what was happening a couple of days ago or tomorrow, that would be even better. So, I searched for all the most high quality, real-time data that I could find that paints the picture of the overall economic health and recovery of downtown Denver and our city as a whole but also consumer behavior. So, I put those together into what we’re calling the High-Frequency COVID Impact Report. They come out every two weeks so there’s always pretty fresh data available."

Where did you find the data?

Brett: A lot of these companies are making their data, that used to be proprietary and you had to pay for, available. However, it’s usually in this giant Xcel, CSV file that is really hard to manage and find any actual information from.

I think we all know Google is tracking us wherever we go through our phones which, right now, is a great thing because they know exactly how consumer behavior is changing. They have it down to the county level so we’re able to get the city and county of Denver data. This data is available to anyone but I download it and analyze it through this downtown lens. We always want to look at things through the downtown lens to make sure our downtown businesses and the health of our downtown economy is front and center. With the Google data, we’re able to answer the questions like is the office worker coming back to work? What about weekends versus weekdays?

Is the data anonymized?

Brett: It’s surprising when you realize how much information is available down to that individual behavior level. But certainly, it’s all anonymized. Even if you had access to the raw data, there’s no way you could figure out individual or even neighborhood patterns. It is certainly very safe from a consumer perspective. For right now, it’s really amazing that we’re able to get a data-driven report on what consumers are doing and what they’re looking for.

How have you seen the numbers change over the past six months?

Brett: The report that I put together yesterday for our High-Frequency Data is the most positive that I’ve put together. It’s hard to call it positive because all of the numbers are still so off where we wanted to be this year and so many people are struggling so much in operating their businesses.

However, we did see that our Labor Day weekend was really strong downtown. We saw the highest pedestrian traffic that we’ve seen since March. Citywide, restaurants in Denver had their first positive day, year-over-year, in terms of seated diners since March, as well. When this data came in on Tuesday, I was all excited. The last few days I’ve been talking to our downtown business community and they really reflected that same thing.

The data is reflecting the reality that Labor Day was strong downtown, certainly nowhere close where anyone expected to be and nowhere near pre-pandemic levels but we are seeing positive chutes whereas in April, May everything was just closed. The more that things open, the more we make progress, the better data that we’ll see.

How has the population using downtown changed?

Brett: I think it’s helpful to think of downtown and who’s using downtown as really being in flux right now. We have three main buckets of downtown users. We have our 27,000 residents, we have our 150,000 employees, and then we have millions and millions of visitors that come to downtown for a day or a week. What we’ve seen is that kind of user mix really change during this pandemic.

During stay-at-home in March and April, it was all residents. Downtown had a very quiet, neighborhood feel, especially in areas with a lot of residents. Then over the summer, we saw an increase in that out of town visitor. That brought a different energy and a different user group to downtown.

Looking forward, we know the return to offices is going to be slow but we will start seeing that employee base come back to downtown. That will again change the mix of the downtown user.

Is there a particular indicator that surprised you?

Brett: I think in-restaurant dining is really interesting. OpenTable is providing all of its data, which used to just be proprietary, to anyone on a daily basis. We have a cohort of 15 peer and aspirational cities that we benchmark ourselves against. When I pulled the restaurant data for the last few High-Frequency reports, I just focused on Denver. It was clear Denver was performing well. We were coming back to restaurants in pretty high numbers. Then, when I compared us to these 15 cities, not only were we the top among them but we were outperforming the global average and the US average. This was surprising. It’s not like the data and reality are telling different stories but the reality is even good performance in restaurant data right now is so deeply challenging for restaurant owners. It's not really anything we can celebrate. We know that our downtown restaurants specifically are really struggling especially going into winter. Even though this was kind of good news, we know the reality is still deeply challenging.

Before the pandemic, what indicators were you watching?

Brett: Our population growth has been the main driver of the incredible growth that metro Denver has experienced over the last decade. It’s not just raw population growth but it’s the population growth of the types of people who are choosing to make downtown Denver their home. It’s a highly educated, in-demand workforce. That’s what’s bringing all of the companies here to continue to grow and employ more and more people.

My biggest question throughout this whole pandemic is what is the impact going to be on migration patterns and how people are moving around the US. Unfortunately, that data is some of the hardest to find because usually, that comes maybe a year, maybe two years later. So, we’re looking at other types of indicators. We look at labor force growth, even though there’s a lot of noise in that data right now. We look at apartment vacancy rates. Obviously the for sale home market to try to get a sense of whether or not population growth is continuing? We feel Denver is poised incredibly strongly coming out of this recession just like we were the first city to recover from the 2008 recession. We feel this is a place where people want to be and that’s what we’ve built for decades. We feel like it is more important than ever that people are able to live where they want to be.

Will you continue to use these real-time indicators post-pandemic?

Brett: I do definitely expect to continue to search for these real-time indicators. This whole experience of our world being turned upside down has kind of made us all rethink the way that we were doing things. I used to think two quarters of a delay in employment data was totally fine. Of course, we’ll still track that official data but we’re going to need to understand this more real-time data for a while. Our world is going to be in a state of flux for quite a while so I do expect us to continue to search for these more real-time indicators and share them with the community in a broader way.

RELATED: Available office space on the rise in Denver

RELATED: When will things get back to how they were before the pandemic?