'It was a mad dash': Jeffco teachers rush to get leftover doses at COVID-19 vaccination event

Jeffco employees said the school district emailed staff members to let them know there were 200 vaccines left over at the clinic for anyone who wanted them. 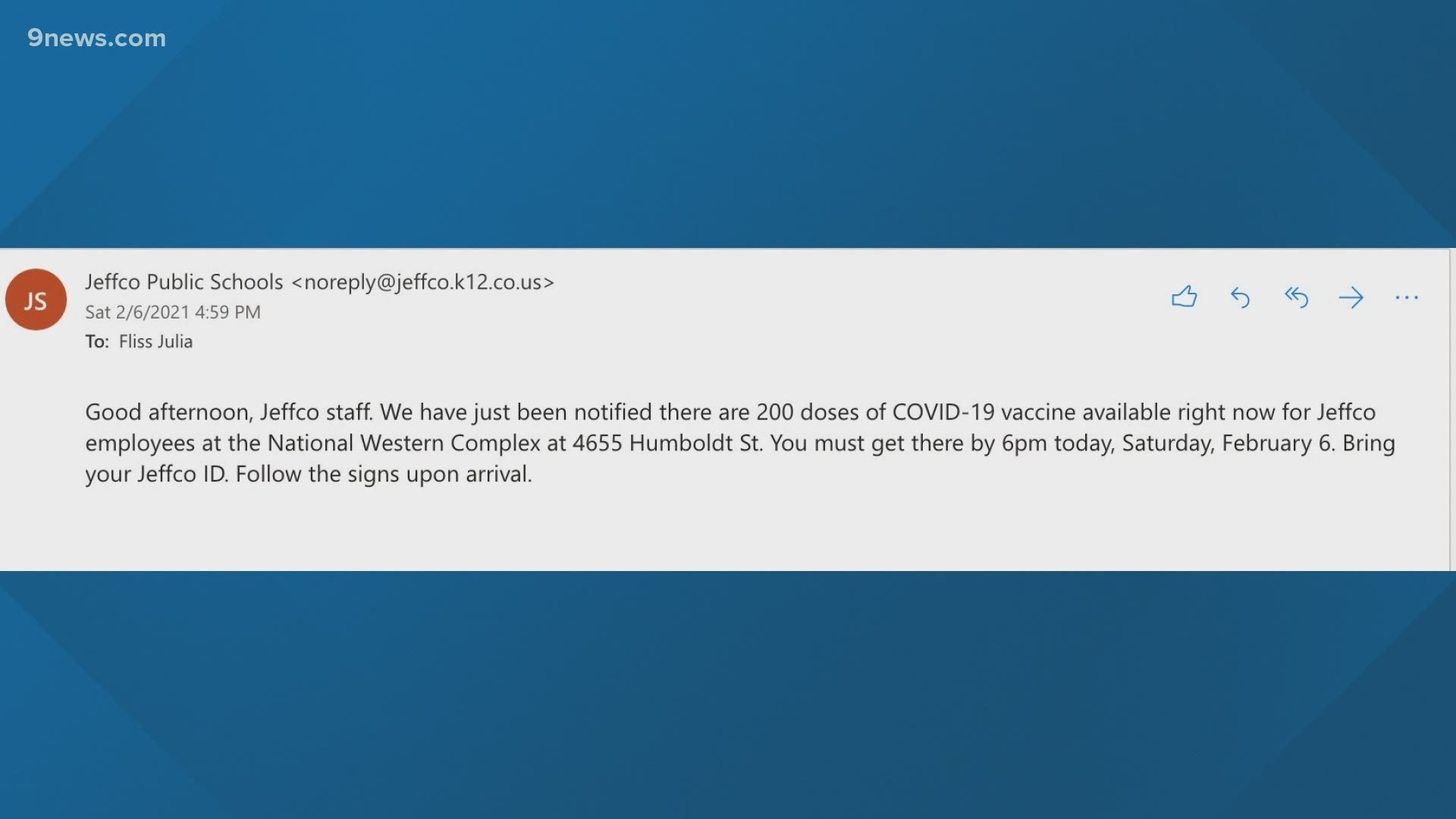 Organizers of SCL Health's mass vaccination event there learned they were going to end up with some extra supply, according to a spokesperson.

SCL Health told 9NEWS that in an effort not to waste vaccine after having some no-shows at the clinic for Coloradans 70 and up, they "extended limited invitations to their education partners and frontline teachers."

Jeffco Public Schools employees tell 9NEWS the school district contacted staff members by email and phone just before 5 p.m. Saturday to let them know there were 200 vaccines left over at the clinic and that anyone who could get there within an hour could potentially claim them.

The email prompted many teachers to race to Denver on Saturday night, creating traffic backups and a "mad dash" for the extra vaccines.

"With the best of intentions, one of our school district partners over-extended the invitation well beyond the capacity of the vaccine that was available for this population," wrote Gregg Moss, SCL Health spokesman, in an email.

SCL Health said the invitation to partners was never meant to be for large-scale distribution. SCL Health said it's not sure what Jeffco Public Schools sent out to teachers or why.

Jeffco Public Schools responded to 9NEWS' request for comment on Sunday morning, saying they would release a statement later in the day.

SCL Health said it couldn't quantify the number of extra doses that were available at the end of the day but called it a "small number."

James MacIndoe, an English teacher at Standley Lake High School, was one of the lucky teachers who got a shot Saturday night.

"I wasn't too panicked," MacIndoe said. "I was listening to the AM radio station that was giving directions for the vaccination site, and it all seemed a little bit like a prequel to The Walking Dead at first, but I started to get worried when a woman in the car in front of me opened the passenger door and just bailed and ran up the street and I was like, 'Oh, no -- people are going to be running for this -- this is weird.' "

MacIndoe got his shot, but other teachers told 9NEWS they didn't.

"I am super relieved to have that experience today," MacIndoe said. "I just wish it could have been orderly and less chaotic."

SCL Health said 5,000 people were vaccinated at their event Saturday, which was an effort to reach vulnerable populations in underserved communities of color.

SCL Health said the event ran smoothly up until the confusion over extra doses late in the day. Following the email to Jeffco Public Schools employees, SCL Health had to call police to help handle the additional traffic.

SCL Health is partnering with local districts to vaccinate teachers according to the state requirements.

"Prior to the event, and going forward, we have committed to vaccinating as many teachers as we can while complying with state guidelines," Moss wrote. "We have already reached out to our partner school districts to find allotted times for teacher vaccinations beginning Monday, and going forward."