CDPHE releases its weekly list of outbreaks on Wednesdays. Here's the latest information about cases at Colorado schools, grocery stores, events and restaurants. 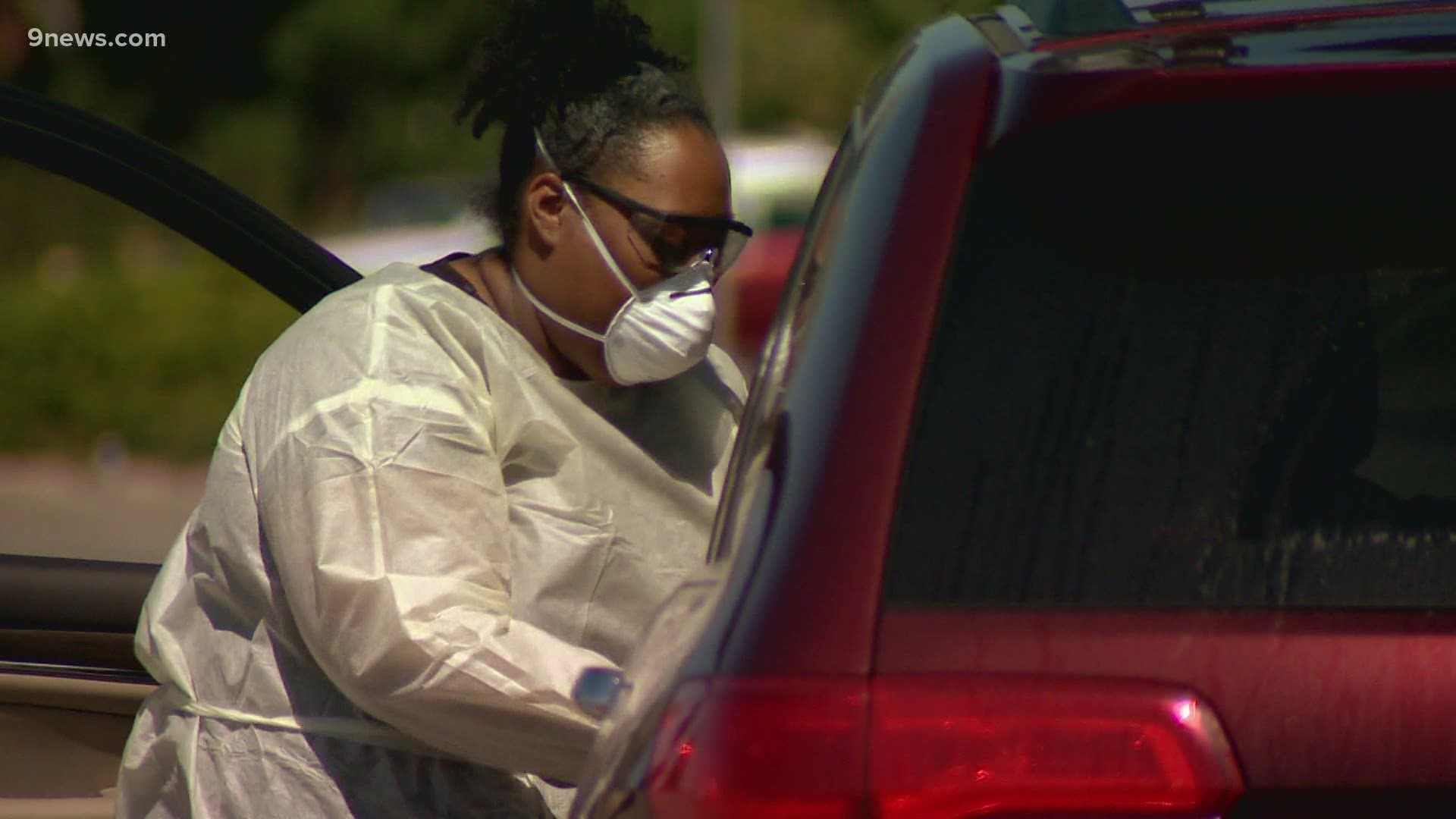 DENVER — There have been 624 COVID-19 outbreaks in Colorado since the pandemic began in March, and 156 of them are still listed as active.

The outbreaks have happened everywhere from schools to restaurants to summer camps.

All but two of the state's deadly COVID-19 outbreaks among staff have been resolved. The two still listed as active are at the JBS meatpacking plant in Greeley and at Steven Roberts Original Desserts in Adams County.

Nineteen nursing homes and jails where at least one resident has died continue to have active COVID-19 outbreaks, according to the data. 1,447 confirmed cases and four confirmed deaths are tied to 24 total outbreaks in prisons, jails and correctional facilities.

Notable new outbreaks from Wednesday's data from the Colorado Department of Public Health and Environment (CDPHE) include:

For an outbreak to be resolved, CDPHE said 28 days must pass with no new illnesses. Two cases constitute an outbreak, and the numbers are cumulative, meaning if an entity has a certain number of cases, that doesn’t mean all those people were sick at once.

Keep reading for a look at active COVID-19 outbreaks by category, according to Wednesday's data from CDPHE. This information lists confirmed outbreaks as of Sept. 1.

> Click or tap here for the raw data from the CDPHE.

The University of Northern Colorado had an outbreak within its athletic department from July 21 to Aug. 16. There were 23 confirmed, and one probable, attendee cases. The data was made public for the first time on Wednesday, despite beginning in July. A CDPHE spokesperson said this happened due to "human error."

"As soon as the error was discovered, it was added to the website," Gabi Johnston, a CDPHE spokesperson, said in an email. "We have added additional internal processes to help prevent this from happening, as well as quality checks to quickly remedy any data entry errors."

Katie-Leigh Corder, a spokesperson for UNC, said in an email that university officials have been working local and state health officials since July. She referred 9News to CDPHE for questions on the outbreak.

COVID-19 outbreaks have been confirmed at five Colorado schools as of Sept. 1, according to the data from CDPHE. Those schools are:

Colorado College switched to remote learning for at least the remainder of the first block (which ends on Sept. 16) up until likely the end of the semester. An earlier 9NEWS report said there were at least 12 positive cases of COVID-19 at the liberal arts college in Colorado Springs, including 11 students and one staff member.

It’s worth mentioning again that the data is cumulative, beginning with when an outbreak has been reported. The number of cases doesn’t reflect the number of people currently sick.

In addition, CDPHE’s outbreak data often lags, meaning that some schools with multiple cases may not be listed in the publicly-available data.

The largest COVID-19 outbreak among people who have attended a venue is at Sky Horn Ranch in Custer County, which according to CDPHE's data, has had 12 positive cases. Four staff members there have also tested positive for COVID-19.

In Denver, 11 people who attended the one-day Vision en Movimiento conference tested positive for COVID-19, and another two have probable cases, according to the data.

Five people at what was listed as a "social gathering Ouray" have tested positive for COVID-19 since Aug. 23 and two more have probable cases, according to CDPHE.

Five people who attended the Sand and Sage Festival in Prowers County also tested positive for COVID-19, the data says.

As of this writing, no deaths have been attributed to people who have attended events listed as active outbreaks.

Four people died during a COVID-19 outbreak at a bridge tournament that occurred in March. That was resolved in April, and is the only deadly event-related outbreak in the data as of this writing.

For the first time in weeks, a new grocery store has been added to the COVID-19 outbreak list. That is the Whole Foods in Tamarac, which CDPHE said has had five confirmed cases of COVID-19.

That was listed as an outbreak on Sept. 1.

There has been an outbreak at the King Soopers in Commerce City since June 1, according to the data. Since then, there have been eight confirmed cases of COVID-19 and 27 that are listed as probable.

There are no other active COVID-19 outbreaks at grocery stores. There have been a total of 17 since the pandemic began.

There are 14 active COVID-19 outbreaks at Colorado restaurants, according to CDPHE's data.

There were two new additions to this week's list: Colorado Mountain Brewery in El Paso County, where there have been two confirmed cases of COVID-19 and two that are listed as probable.

The other new addition was a second COVID-19 outbreak at Chick-Fil-A 01304 in Arapahoe County, where CDPHE said two employees have positive cases of COVID-19 and one has a probable case.

There have been six COVID-19 at Colorado Chick-Fil-A restaurants since the pandemic began, according to CDPHE. Only one is still listed as active.

There are now 289 confirmed cases connected to restaurants and bars in Colorado outbreaks, up 12 from last week. 20 of the 72 restaurant and bar outbreaks are active. Bars & restaurants make up 12% of 624 outbreaks across all categories.

The number of new cases and in health care outbreaks has gone up from the week prior for the first time since 07/29. Up until this point, the number of cases have steadily been decreasing each week. Health care outbreaks added 115 more cases across residents, staff and attendees. There are 14 more confirmed deaths, the most since the state added 15 deaths the week of 08/05.

There are two active homeless outbreaks. The largest is among the 128 residents and 10 staff members listed in the category of people experiencing homelessness in Denver. The other is the New Genesis Transitional Living Shelter in Denver, which has 35 confirmed cases.

Overall, 205 confirmed cases are tied to five outbreaks in the homeless population.


See a list of active outbreaks at Colorado restaurants below:

Editor's note: An earlier version of this story listed an outbreak at Monument Academy in El Paso County. The CDPHE acknowledged this outbreak was erroneously included in their data. It has been removed from the list.

> Click or tap here for the raw data from the CDPHE, which includes a full list of the active outbreaks in the state.