C&C Cafe's business license was suspended Tuesday after opening to dine-in customers on Mother's Day in defiance of a state-wide public health order. 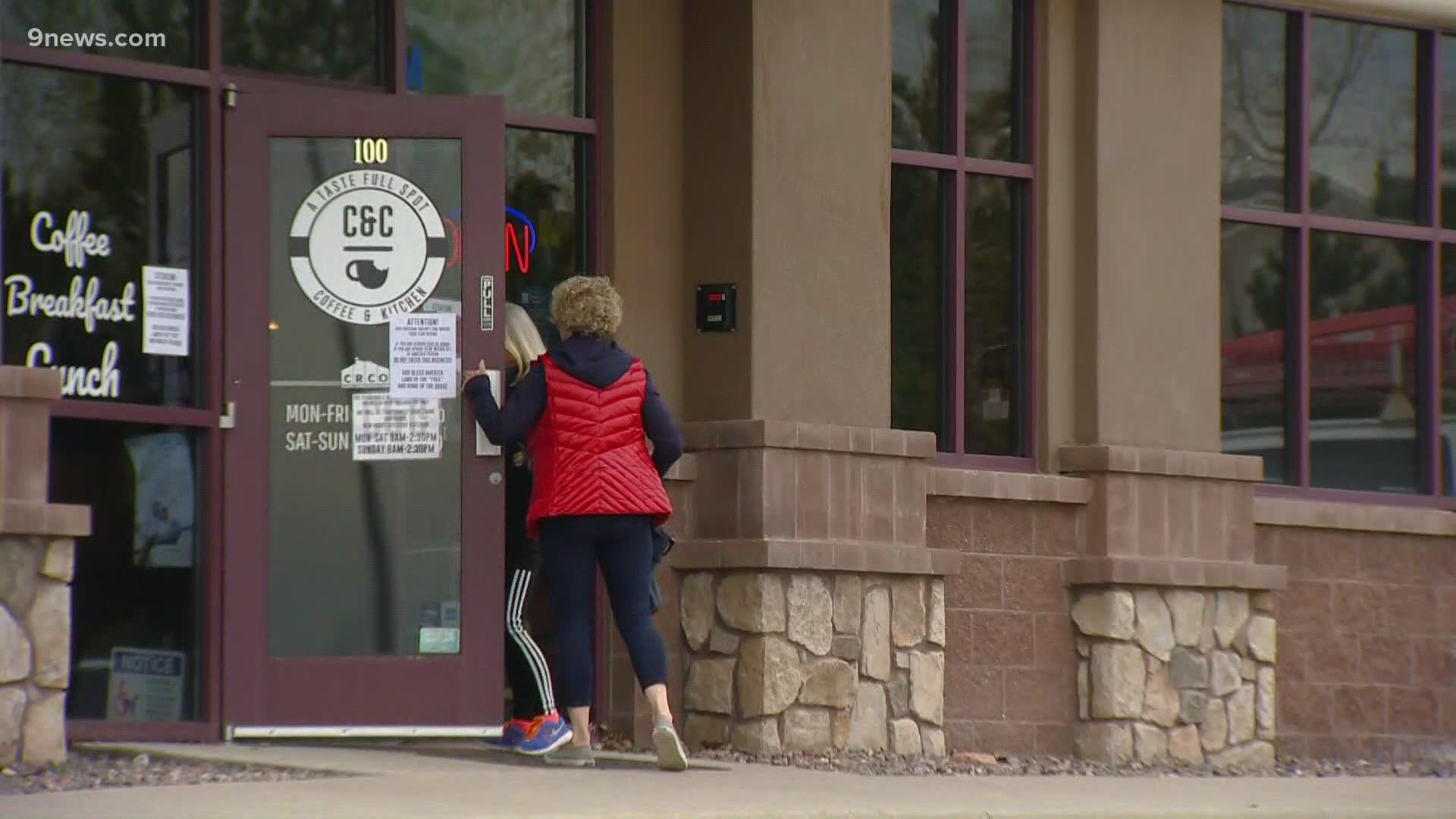 CASTLE ROCK, Colo. — People have been taping money and notes of support on the windows of a Castle Rock restaurant on Tuesday after the business was shut down for defying a public health order.

C&C Cafe made national news for opening up its business to dine-in customers on Mother's Day in defiance of a state-wide public health order prohibiting in-restaurant dining due to COVID-19.

“While the residents and businesses of Colorado made tremendous sacrifices through physical distancing in order to flatten the curve, we are still not out of the woods. This virus will continue to take the lives of our families, neighbors, and friends if we don’t act responsibly,” said Jill Hunsaker Ryan, Executive Director, CDPHE.

“Irresponsible behavior like this only serves to defeat all of the progress made during the Stay at Home Order in slowing the spread.”

Under state law a license can be suspended or revoked in cases of "imminent health hazard".

Gov. Jared Polis in a news conference Monday addressing the state's response to COVID-19 said he was disappointed to see businesses actively breaking the law.

"Like most Coloradans, I didn't get to see (my mother) in person in April or May, and I didn't get to take her out for lunch on Mother's Day," Polis said. "I love my mom far too much to put her at risk by visiting a busy restaurant operating illegally just to take a selfie with omelets and a mimosa."

Cmdr. Todd Brown with Castle Rock Police Department said while their agency would be the one to issue a summons, they have not yet done so.

He said the request to issue a summons would have to come from either the Tri-County Health Department or the state health department. If they do get a request, Brown said they would consult with their legal team before issuing the summons.

Attorney General Phil Weiser talked to 9NEWS about what happens when a business, in general, continues to violate orders.

"For those rare cases where just brazen, lawless activity was happening, there is criminal sanctions that could be pursed by a district attorney. This would be a misdemeanor, up to a year in jail," Weiser said.

George Brauchler is the district attorney who covers Douglas County. He said he does not consider business owners like this to be actual criminals.

"These are good men and women who are engaging in otherwise lawful businesses. Many of them struggling with their livelihoods and the ability to put food on their family’s tables," Brauchler said. "These are not people out there selling drugs, breaking into cars, robbing people. It is the circumstance that puts us at a crossroads between what is lawful and I just don’t want to see the criminal justice system used to enforce these if at all possible."

But, Brauchler said he will if he has to.

"I’m very sensitive to the use of the criminal justice system to enforce these orders, but as long as these are laws on the books and this is a tool in my tool box, even though I’ll use it sparingly and in the most remote circumstances, I will use it when I think it is necessary," Brauchler said.

C&C received a $5,000 small-business grant last month from the Town of Castle Rock for COVID-19 hardship.

C&C's owner April Arellano hung up the phone when 9NEWS reached out to ask her about the grant and if the business did receive any Small Business Association (SBA) funding.

"C&C Coffee and Kitchen is a family owned restaurant in Castle Rock, Colorado.  They could not survive another day of Governor Polis unconstitutionally saying what businesses can and cannot be open.  Home Depot can have up to 500 customers, but a family business is not essential in his mind.

We are doing two things: 1) supporting this brave family who pushed back and 2) poking the bear - Polis to let him know we are not hibernating.

Help these brave people survive the one thing worse than corona virus - Polis himself."