This type of treatment is part of the latest push from the state to keep COVID-19 patients out of the hospital. 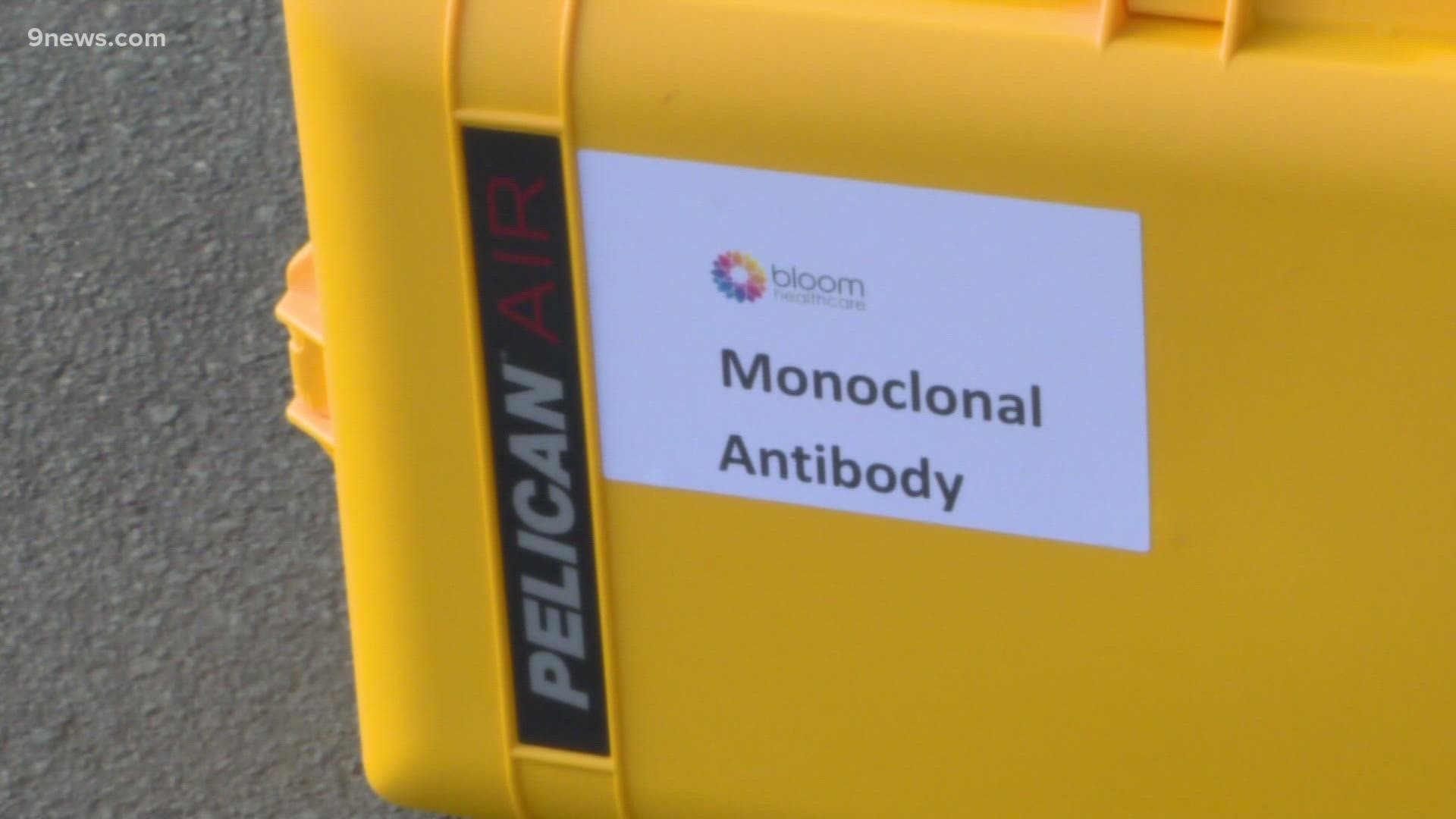 ARVADA, Colo. — When staff at an assisted living facility in Arvada noticed that Margaret Noel's stepdad sounded congested, they brought him to his room and gave him a COVID-19 test.

The test came back positive.

But 79-year-old Cole Ray Jr., who got the Pfizer vaccine, assured his step-daughter that he'd be okay.

"He's an avid reader, so he's just reading. He's got all his books and he's fine," Noel said over the phone. "He's just very matter of fact. Very, you know, ‘I've had my shots, you know, I'll be fine. You know, don't worry about it. I'm feeling great.’"

That optimism also extends from the fact that no more than a few hours after the phone interview, her stepdad would be getting monoclonal antibody treatment from Bloom Healthcare.

The type of treatment is part of the latest push from the state to keep COVID-19 patients out of the hospital.

Patients needs a referral from a doctor to get the treatment, but the state has still set up mobile buses in places like Colorado Springs, Evans, Pueblo, Grand Junction, and Cortez.

UCHealth and National Jewish Health are also offering the treatment with a referral, along with the rest of the state's 161 providers.

But there's also a push to get the treatment into nursing homes around the state.

Dr. Adit Ginde started on the research side of the clinical trials when the development of the treatments was first happening.

"So we've been developing these agents and testing them in clinical trials for both patients prior to hospitalization and in the hospital for over a year now," he said.

He explained that the treatment is based around antibodies in the body.

"Your body can make its own antibodies. But sometimes that doesn't happen fast enough or well enough. And so this is laboratory made. We can give it as a single intravenous infusion or as an injection, and it essentially boosts the immunity immediately, and it binds to the virus and helps the body clear it quickly," he said. "Patients actually start to feel better as early as within 6 to 12 hours after receiving this treatment."

But overall he feels the treatment, while effective, should not be a replacement for actually getting the COVID-19 vaccine.

"Monoclonal antibodies is not a replacement for vaccination. Vaccination is still the cornerstone of our response to the COVID-19 pandemic. We need to prevent as many illnesses from occurring as possible. And vaccination is the way to do that," Dr. Ginde said. "However, we are still seeing no intervention is perfect. We are still seeing some people that are getting breakthrough infections and breakthrough infections that require hospitalization. So that's where the combination of vaccination plus having a highly effective treatment like monoclonal antibodies is the recipe for success at beating this pandemic to minimize the burden of disease and suffering."

The treatment itself is especially suitable for those who are older than 65 or are immunocompromised.

Dr. Ginde adds that there are minimal side effects, and typically patients are monitored for an hour after receiving the treatment.

"Part of the challenge is, you know, this has to be given as an infusion or as an injection. And so it's not a pill that people can take. And so you have to to get set up with an infusion and an appointment and that can create some some logistical barriers," he said.

But some health care providers are trying to break down those barriers, and go right to where COVD-19 cases are, even in a patient's own home.

From the lab, to home

Michelle Jenkins, a physician's assistant of around seven years for Bloom Healthcare, would be who takes care of 79-year-old Cole Ray Jr.

While getting her PPE gear on before entering the building, she shared how her patients typically react to the treatment.

“They’re really excited - usually they’re caught off guard, they’re surprised, they didn’t know it was available to them and usually very grateful," she said. “It’s very difficult for them to get a family member who doesn’t want to be exposed to take them to an outpatient treatment center.”

Jenkins is part of a team of traveling physicians that go to assisted living facilities to help with care. On Saturday, Jenkins had the company's transport refrigerator that carries the treatment they use, along with a separate case to actually transport more PPE.

According to partner and co-founder John Freeman, Bloom has helped administer more than 15,000 vaccination and booster shots, along with nearly 300 monoclonal antibody treatments since around August.

Bloom, who collaborates closely with the Colorado Department of Public Health and Environment, says they work with the patient's primary health care provider to make sure they're eligible.

"Understanding that Bloom takes care of Colorado's most frail population, this treatment has helped to ensure that our patients remain in their homes and out of the local hospitals, freeing up the hospitals beds for those that truly need them," Freeman told 9NEWS via email.

Noel added that her stepdad did not have any adverse reaction as of Saturday night, and that his fever was going down.

How nursing homes are doing

Doug Farmer, the president and CEO of the association, says they don't have exact numbers on the amount of booster shots given to residents in long-term care facilities, but that residents in general have been receptive to it.

"If they got the first and second shot, they're pretty receptive to getting a third shot," he said. "It is their home, and so federal and state regulation treat them accordingly. You know, they're free to choose whether or not they they take any particular type of medical care, including a vaccination."

Citing state data, Farmer said as of this past week 92% of nursing home residents and 94% of assisted-living residents accepted a vaccination in the state.

For monoclonal antibody treatment, he adds that they don't have data on the amount distributed, but says health care providers has spoken highly of the treatment.

"I've heard of some of the long term care physicians speak about the importance of monoclonal antibodies as an option as appropriate, clinically appropriate. I don't know for sure who's using them and with what frequency, but I do know a few doctors that I've heard of speak of them positively, so I would presume that they're using that work with some of their patients," he said. "But I do think in comparison to what we've seen in previous surges because we have so many people that are vaccinated and living in our communities, we are seeing relatively fewer people being hospitalized and far fewer people dying based on the number of cases that we've seen in our facilities. So we know that the vaccine is certainly helping."

Overall, he says he's pleased to see any treatment that will help hospitals.

"Anytime there's access to something that's likely to help, we're happy to see it," he said.

RELATED: What is monoclonal antibody treatment, and which COVID patients are eligible?