'Not who died with COVID-19, but who died of COVID-19': Polis addresses questions about CDPHE death reports

The Colorado governor also touched briefly on vaccines and testing capacity at a Friday news conference. 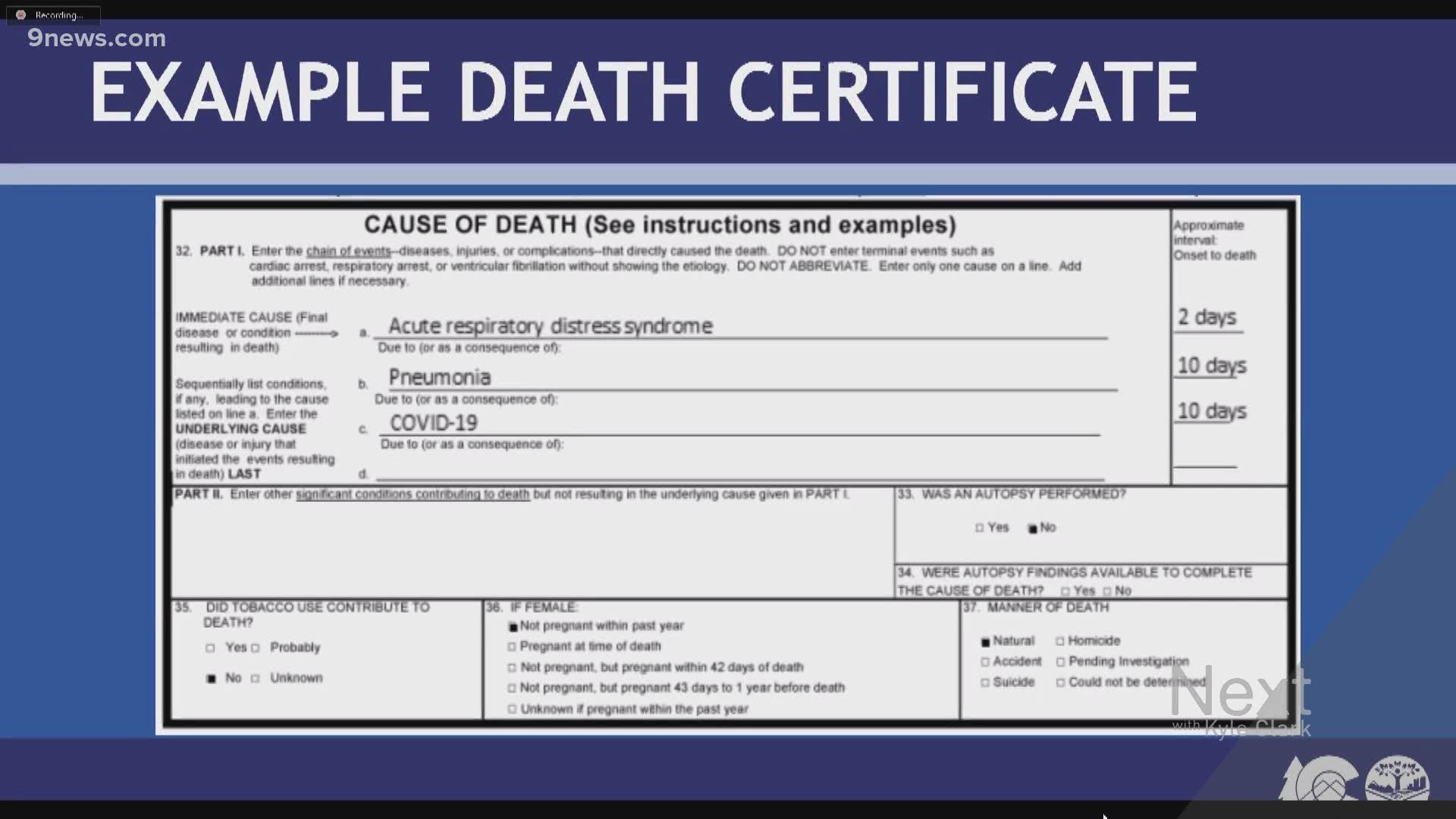 DENVER — Colorado Gov. Jared Polis said state health officials should always rely on data from a coroner, rather than their own analysis of death certificates, when it comes to reporting data on COVID-19 deaths.

Baisley in the letter accuses Ryan and CDPHE of falsely inflating the number of COVID-19-related deaths by overruling death findings by attending physicians in cases where patients also tested positive for COVID-19.

"We are disappointed that a member of the statehouse is choosing to advance a false narrative," CDPHE told 9NEWS via email. "The state health department does not change or falsify death certificates. Accusations to the contrary are purposefully false or misinformed."

Polis said when there is a gray area, state officials should rely on the ruling from the coroner or physicians and that "nobody behind a desk should ever second-guess a coroner or an attending physician that lists the cause of death on a certificate."

"I've told [CDPHE] to make sure they're very clear in their reporting," he said.

Polis added that there are only a few cases where the official cause of death isn't clear.

"What the people of Colorado want to know is not who died with COVID, but who died of COVID-19," Polis said.

CDPHE said in a statement that it follows the "CDC-accepted definition" for COVID-19 cases and deaths.

"We classify a death as confirmed when there was a case who had a positive SARS-CoV-2 (COVID-19) laboratory test and then died. We also classify some deaths as probable. You can find the full criteria for that on our website under 'About our Data,' but the gist is that there must be strong epidemiological evidence of COVID-19 such as a combination of close contact with a confirmed case and symptoms of COVID-19. We will also count a death as a COVID-19 death when there is no known positive laboratory test but the death certificate lists 'COVID-19' as a cause of death.”

In a conference call with reporters Friday afternoon, CDPHE officials revealed they would be announcing two numbers concerning deaths among COVID-19 patients going forward. One number would show the total number of people who died while sick with COVID-19. The other number would be how many people had died as a result of COVID-19. CDPHE reported 1,150 deaths among COVID-19 patients Friday, 878 of those deaths due to the disease. 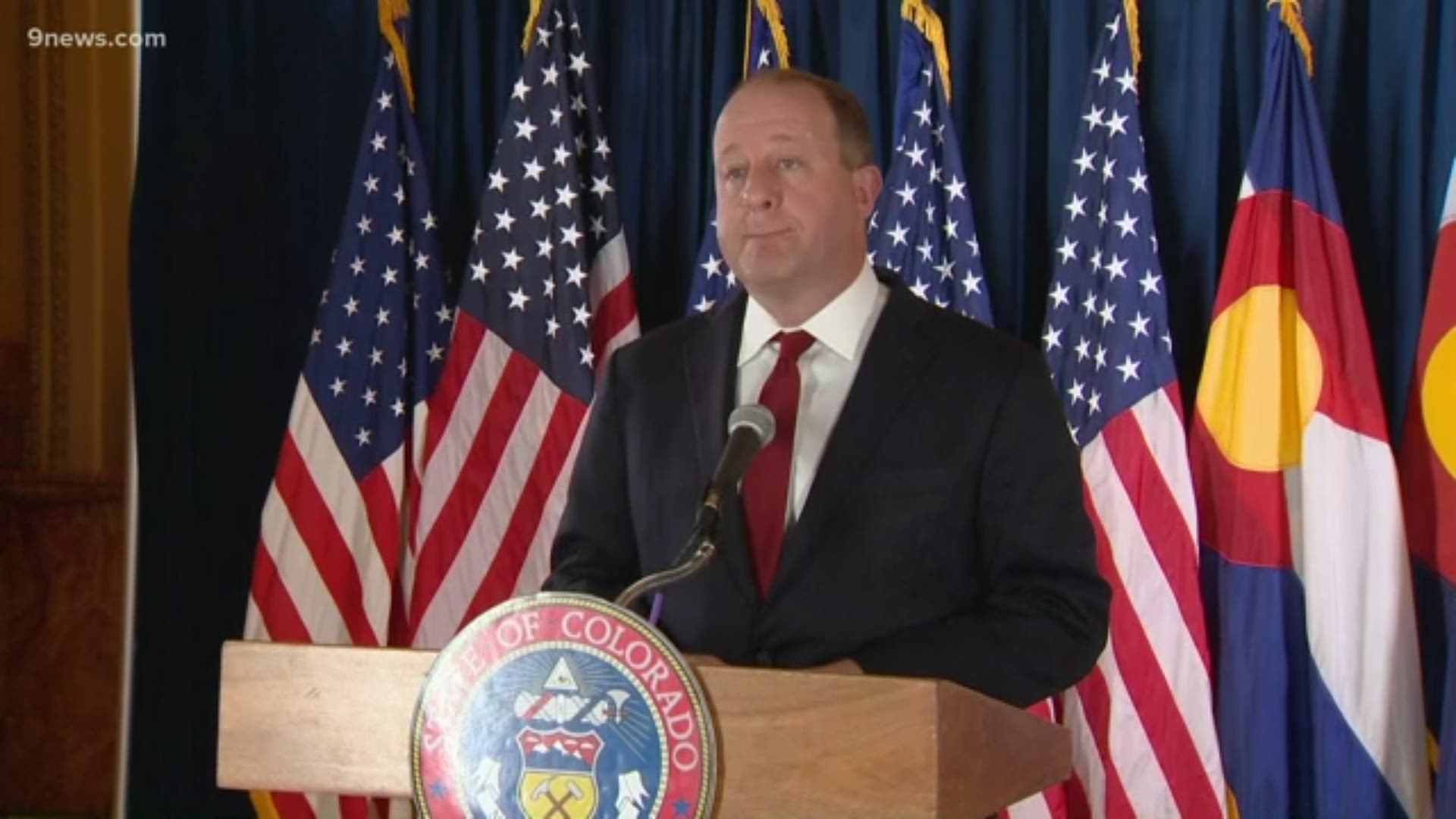 People who are symptomatic can get tested at one of the state's 32 community testing sites or by contacting their health care provider.

'There won't be enough'

Just hours after President Donald Trump delivered remarks predicting a COVID-19 vaccine by the end of the year, Polis said it's unlikely there will be enough vaccinations available to provide them on a massive scale.

Polis said the state has not yet come up with a plan, but that those "most vulnerable" would have to be prioritized for the limited number of vaccines likely to be available.

"There won't be enough vaccines for the people [who] want them," he said, adding that state officials would have to come up with a plan.

The Colorado governor also encouraged people to join in on the 7 p.m. moment of silence to honor the more than 1,000 people in the state who've died due to COVID-19.

Coloradans can participate by wearing a protective face covering or masks for the minute of silence to display their effort to do their part to save lives at 7 p.m. They can also post on social media to raise awareness about the remembrance event.

Gov. Jared Polis has been holding news conferences three times per week since shortly after the state's first confirmed case in March.

Polis on Wednesday met with President Donald Trump in Washington, D.C., where they discussed a range of subjects including efforts to reopen restaurants to in-person dining and the impact on the state's ski industry.

At a news conference after the meeting with Trump, Polis addressed concerns over traveling: He said that flying on Wednesday was different from before and called it tense. He said his family was concerned about the travel, but he couldn't turn down an invitation to the White House.

Polis on Monday addressed the timeline for the state's path to reopening, saying health officials would have data from Colorado's first few weeks under the safer-at-home order around May 25. That data, he said, will help guide conversations on when and how restaurants can reopen in-house seating. He said he hopes to have in-restaurant dining by the end of May.