Colorado reported more than 2,000 new COVID cases on Wednesday, the largest daily increase since May. 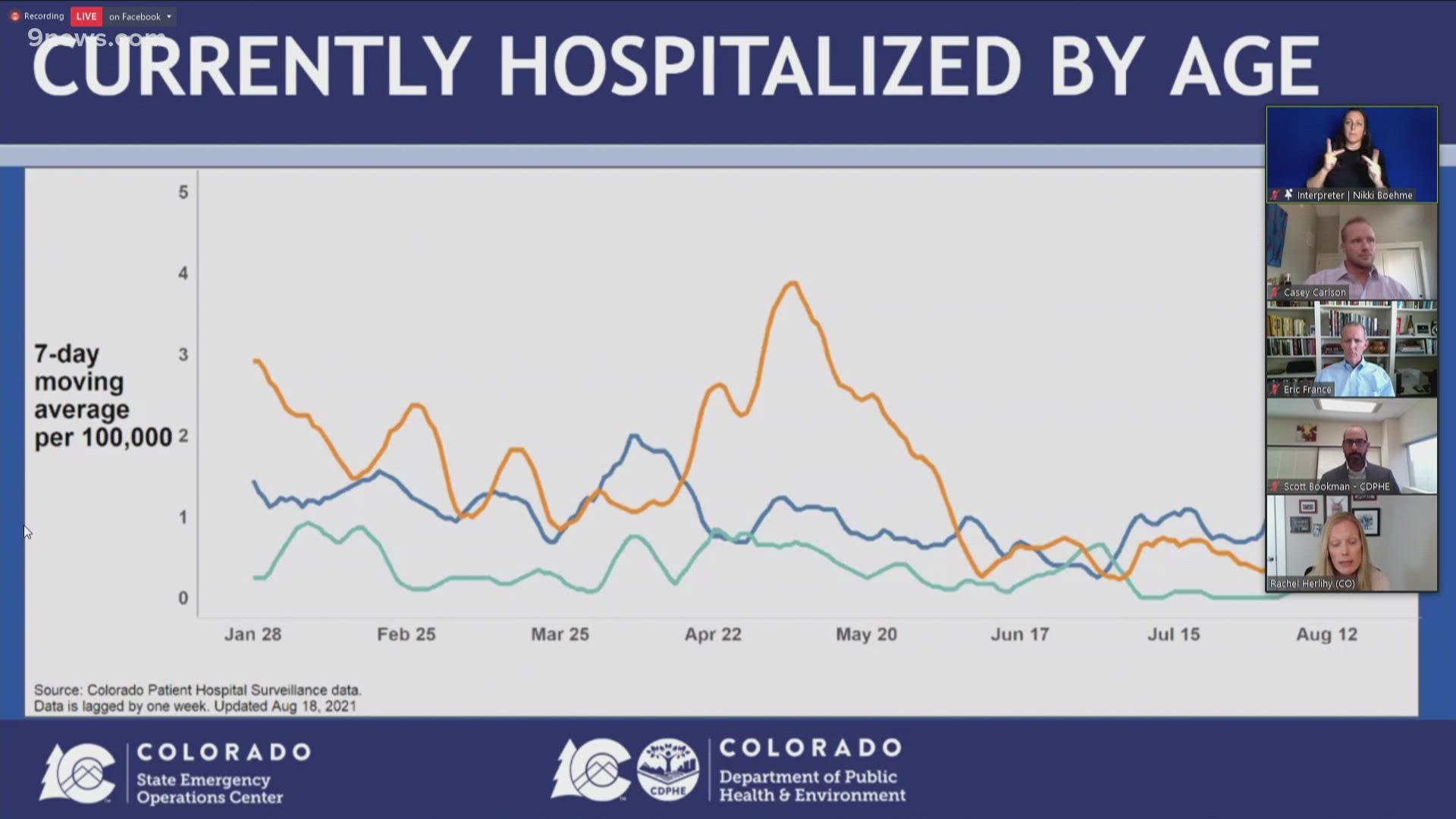 DENVER — Officials with the Colorado Department of Health and Environment (CDPHE) gave an update on the state's response to the COVID-19 pandemic and vaccination efforts Thursday morning.

Dr. Rachel Herlihy, state epidemiologist for CDPHE, said the majority of hospitalizations in the state and across the nation are among the 18 and older adult population.

However, she said pediatric hospitalization rates are increasing, and that most of the limited data available so far indicates it is because the delta variant is more transmissible compared to earlier strains. But Herlihy said more data is needed to draw stronger conclusions.

In response to questions about vaccine breakthrough rates, Herlihy said that data show unvaccinated Coloradans are roughly seven times more likely to be hospitalized with COVID-19. She did say that ratio will go down as more people become vaccinated, meaning fewer are unvaccinated.

Scott Bookman, COVID-19 incident commander for CDPHE, said there is still a significant amount of ICU and pediatric ICU beds available, and that the number of hospitalized is currently around 600 people which is much lower than the peak of more than 1,800 last winter.

Bookman also said the state is working to ensure pediatric ICU beds are being maximized.

Currently, he said about 80% of ICU beds in the state are currently being used, and there is significant surge capacity. Bookman also said about 78% of surgical beds are being used, leaving plenty of capacity at this time.

RELATED: US health officials call for booster shots against COVID-19

Going forward, France said people who are moderately and severely immunocompromised will be recommended to get a third mRNA vaccine dose four weeks after their second shot.

France also said discussions are going on now regarding the third shot for people who received a two-dose mRNA vaccine. He said research shows the vaccines' effectiveness begins to wane about six to eight months after the primary series is completed.

He said that if it passes independent reviews from the Federal Drug Administration and the Advisory Committee on Immunization Practices, Coloradans could begin getting a third mRNA dose the week of Sep. 20.

RELATED: Application designed to prevent the spread of COVID-19 worked 8% of the time

Casey Carlson, senior solution architect for the Office of Information and Technology, announced that a new self-reporting option is being added to the state's exposure notification app.

Individuals who test positive will now be able to upload their test results without having to wait for a code to be sent to them. After providing some basic information including the date of the positive test, users will get a verification text that will take them to an option to send an anonymous exposure notification.

RELATED: Colorado sees greatest increase in COVID cases since May

The state reported 2,023 new COVID-19 cases on Wednesday, which is the largest daily increase since May.

Gov. Jared Polis (D-Colo.) said on Wednesday the state is not yet seeing a downward trend in cases of hospitalizations of the virus. He urged Coloradans to be vigilant and said over 98% of new COVID cases in the state are the delta variant.

Overall, Colorado is experiencing lower rates of cases and death rates compared to the rest of the country, according to Herlihy. Right now, the highest rates of cases in the country are being seen in Southeast states, Herlihy said.

Herlihy suggested that kids returning to schools in the Southeast may be a factor in the higher case rates, and warned that Colorado is not immune to seeing a rapid increase in new COVID-19 cases.

“Today, we actually saw our greatest increase in cases that we’ve see in a single day since May, so I do think we are at risk of seeing a rapid increase of cases here," Herlihy said.

As of Wednesday, 72.5% of Colorado adults and 66% of those ages 12 and up have received at least one dose of vaccine, Polis said.

As the debate over whether to require masks in schools rages on, some county health departments are taking the decision out of the hands of individual districts and instead issuing public health orders requiring the use of masks in school settings.

On Tuesday, the City and County of Denver issued a public health order that requires face coverings in schools and childcare facilities for all people ages 2 and older.

The Tri-County Health Department (TCHD) also voted Tuesday to pass a mask mandate for all students ages 2-11 in public and private schools in Adams, Arapahoe and Douglas counties.

The Jefferson County Public Health (JCPH) Department issued a public health order Monday requiring masks while inside at schools and childcare settings for anyone over the age of two starting on Tuesday.