It's been nearly a year since the first case of COVID-19 was reported in Colorado. CDPHE looked back on the state's response at a Thursday news conference. 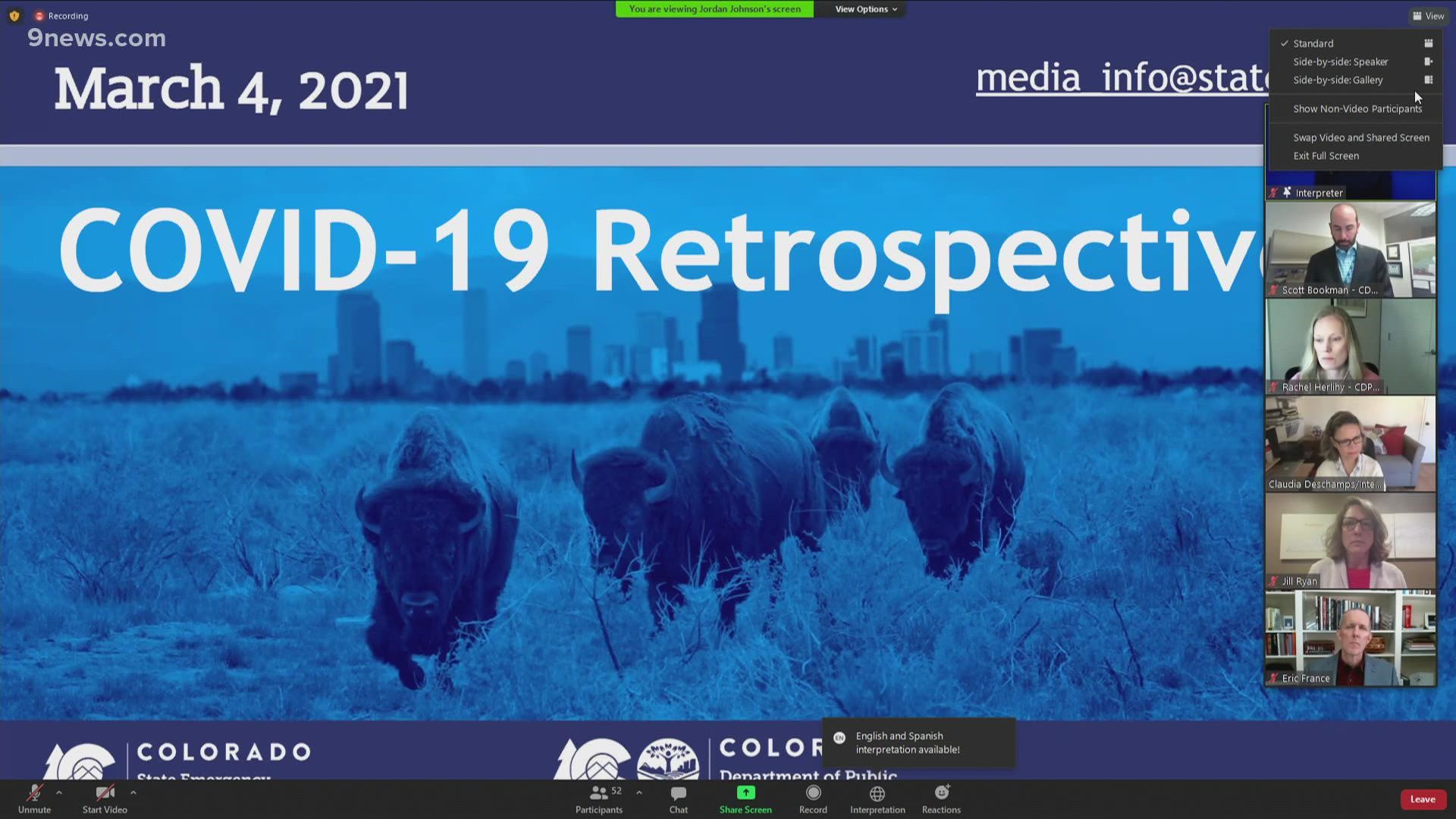 DENVER — Colorado's first shipment of 45,500 Johnson & Johnson COVID-19 vaccinations arrived in the state and are being set for distribution to local providers, officials with the Colorado Department of Public Health and Environment (CDPHE) said Thursday.

"It's been very effective about what's important...protecting against disease," he said, adding that it has other advantages in that it only requires a single dose and does not need to be transported cold.

The U.S. Food and Drug Administration (FDA) granted Emergency Use Authorization of the vaccine from Janssen Pharmaceuticals — which is owned by Johnson & Johnson — last week. The Johnson & Johnson vaccine requires a single dose and is about 85% effective against overall disease, deaths and in preventing hospitalizations. It is also compatible with standard vaccine storage and distribution channels. Both the Moderna and Pfizer vaccines, which require two doses and have an efficacy rate of 94-95%, must be shipped frozen and stored at colder temperatures.

France was joined at a Thursday update on the state's COVID response, which was largely focused on looking back at the pandemic since it began, by:

"We're starting to see a clear impact from these vaccinations" at long-term care facilities, Herlihy said.

Changes to the phases of distribution were also recently announced, including new information about Phase 1B.3 and 1B.4.

Polis announced last week that those 60+ will be eligible for the COVID-19 vaccine on Friday, March 5, along with some frontline essential workers, such as grocery store employees, as the state nears its goal of vaccinating 70% of those 70 and older.

Phase 1B.3 includes about 958,000 people who will become eligible to receive the vaccine on March 5.

She also highlighted overall case numbers — which stand at a cumulative 431,670 in the state as of March 4 — as never exceeding national trends.

"We're certainly not out of the woods yet," Herlihy said, adding that variants may play a role in changing the trends. "...But we've certainly come a long way."

Health experts continue to monitor COVID-19 variants in the state.

Colorado was the first state in the country to report a case of the B.1.1.7 variant first detected in the United Kingdom.

CDPHE is also investigating several cases of the variant initially detected in California: B.1.427/B.1.429. There are currently 114 confirmed variant cases and 72 under investigation in the state, according to the state's dashboard. In an email to 9NEWS, CDPHE said:

"The state lab screens all of the positive tests it analyzes for variants, and screens batches of positive tests from private labs. Eventually, the lab plans to screen 5% of all positive tests in Colorado for the variant. Right now, it is screening about 3%."

RELATED: What we know about the COVID-19 variants in Colorado

A look at Colorado's response to the pandemic since it began

Ryan highlighted the steps the state and CDPHE have taken to combat COVID-19 since it arrived in the state in early 2020. They included:

"We massively scaled up on a dime," Ryan said.

Ryan also highlighted the state's response to three waves of COVID-19, particularly in November, when the state implemented the COVID-19 dial that allowed counties to implement specific restrictions based on case counts there.

"People listened to advice not to interact with other households" over the holidays, Ryan said. "We see success because of it.."

"This was really a challenging year for everybody," Vahling said. "...I was truly inspired...by [the] willingness of Colorado residents to come together to keep our community safe. .. They stepped up and followed public health guidelines to slow the spread...that's why Colorado had so much success." 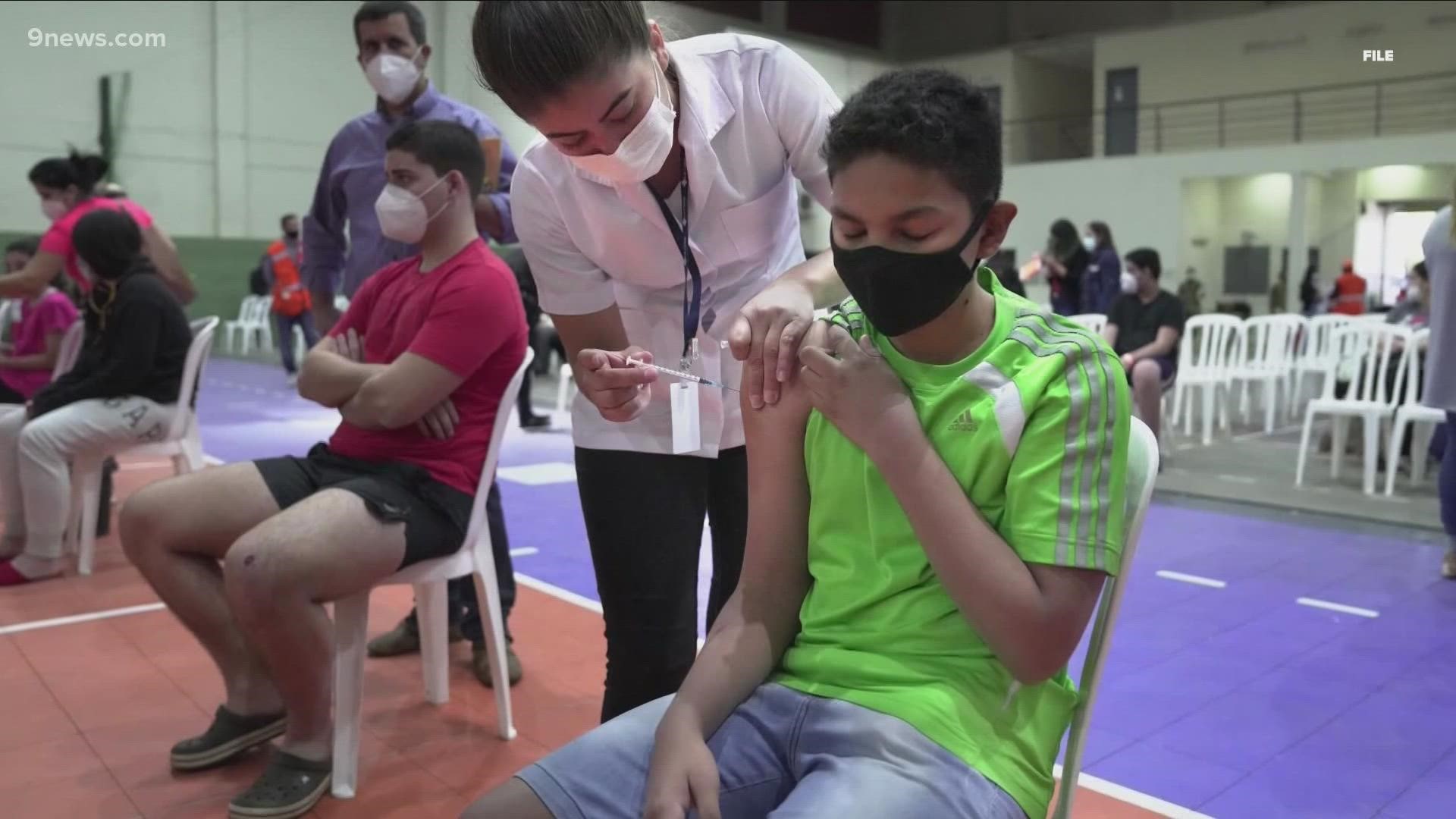