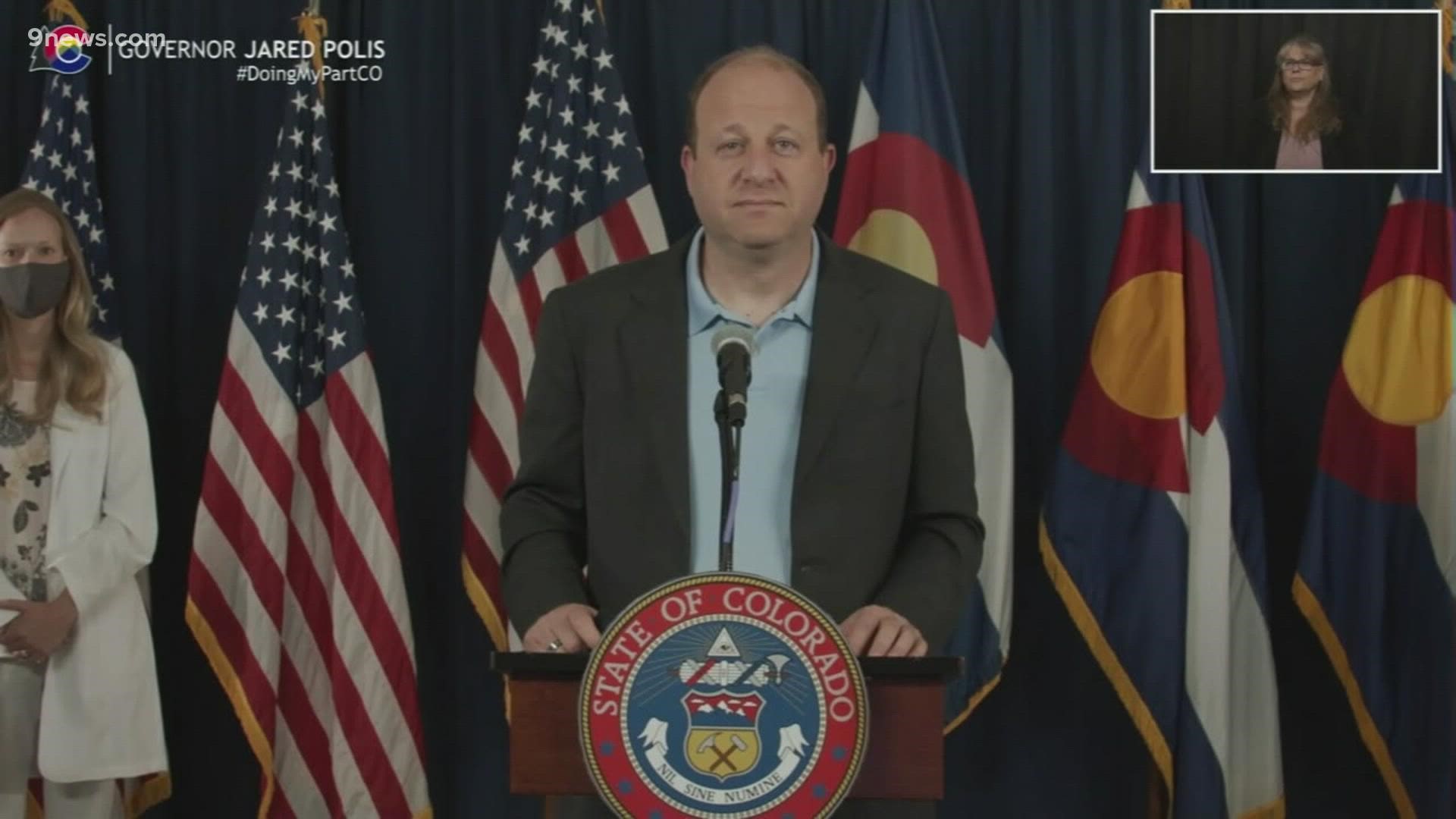 DENVER — The Pfizer vaccine could be available to those as young as 12 by this weekend, according to Gov. Jared Polis (D-Colorado) who made that announcement during an update on the state's response to the pandemic Tuesday afternoon.

> Video above: Pfizer COVID vaccine authorized for ages 12-15 by FDA.

That news is welcome as state leaders said the highest growing case rates are among that age group.

"Youth are currently accounting for more new cases in the state as many older Coloradans have already taken the opportunity to receive the vaccine," said Dr. Rachel Herlihy, an epidemiologist with the Colorado Department of Health and Environment (CDPHE). "In fact, our highest case rates are currently among middle school and high school students in the state."

She said they hope to slow that rate before the new school year in the fall.

The Food and Drug Administration announced Monday it is expanding emergency use authorization (EUA) for Pfizer's COVID-19 vaccine to children ages 12 to 15.

Herlihy said in trials for that age group, the vaccine showed 100% efficacy, meaning that none of those who got the vaccine tested positive.

The FDA action will be followed by the advisory committee's meeting, currently set for Wednesday. A draft agenda posted online says a vote would happen early Wednesday afternoon. If the committee gives the OK, the vaccines can then be distributed.

State leaders said they're waiting for that decision before allowing any providers in the state to administer the vaccine. Vaccines for the age group could be available as soon as Thursday, but Polis said the more likely scenario is this weekend.

Any provider in the state that receives an allotment of the Pfizer vaccine will be able to administer to this new age group, health leaders said. Polis said he hopes that the vaccine would be widely available at pediatrician offices soon.

Denver Clerk and Recorder Paul Lopez also spoke at the briefing on Tuesday about his choice to get the vaccine.

"I took the vaccine because it's important for me as that man in my family and that father to be able to remain in my daughter's life to walk across that graduation stage, to be able to hug my mother," he said

He said his 13-year-old daughter will also get it as soon as she's able to do so and even though she's considered less vulnerable to the virus due to her age.

"If it's not 100% sure that I can take care of my daughter, I'm not going to play around with even a fraction of a threat to my daughter's health," he said.

To make it even easier to get a vaccine, the governor announced a new program allowing employers to bring a vaccine clinic to their workplace. All employers no matter how big or small can sign up through the state.

All staffing, logistics, and vaccine supplies will be coordinated and provided by the CDPHE. The enrolling employer, union, or trade association will just need to advertise the free, on-site vaccination opportunity to their employees or members.

Polis also said that employees should get four hours of paid time off to get the vaccine or recover from side effects.

"The four-hour time off is what we are using as best practice," Polis said. "If your employer is not, you can absolutely tell our division of employment and labor standards. They would like to hear if there are any violations."

Polis said Tuesday that there are now four mobile units that are administering the vaccine. They have made 82 stops since March and over the next few weeks, 80 additional stops are planned.

Click here to find out if the mobile units will be in your area.

"We've now delivered over 5,800 doses with our mobile vaccine clinics," he said.

Appointments are not required, however, Polis said there is an option to pre-register.

Nearly 35% of the U.S. population and 44% of adults have been fully vaccinated as of Monday, according to the CDC. That includes people who have received both doses of either the Pfizer or Moderna vaccines or the single-dose Johnson & Johnson vaccine. Forty-six percent of the population and 58.2% have received at least one dose of one of those vaccines.

In Colorado, Polis said 76% of people over 70 are fully vaccinated and 85% in that age group have received at least one dose.

Hospitalizations fell by 22 to 631, but that's still higher than it was just a few weeks ago, Polis said.