The organization released a statement saying it was "shocked" that the COVID-19 vaccine plan put restaurant workers in Phase 1B.4. 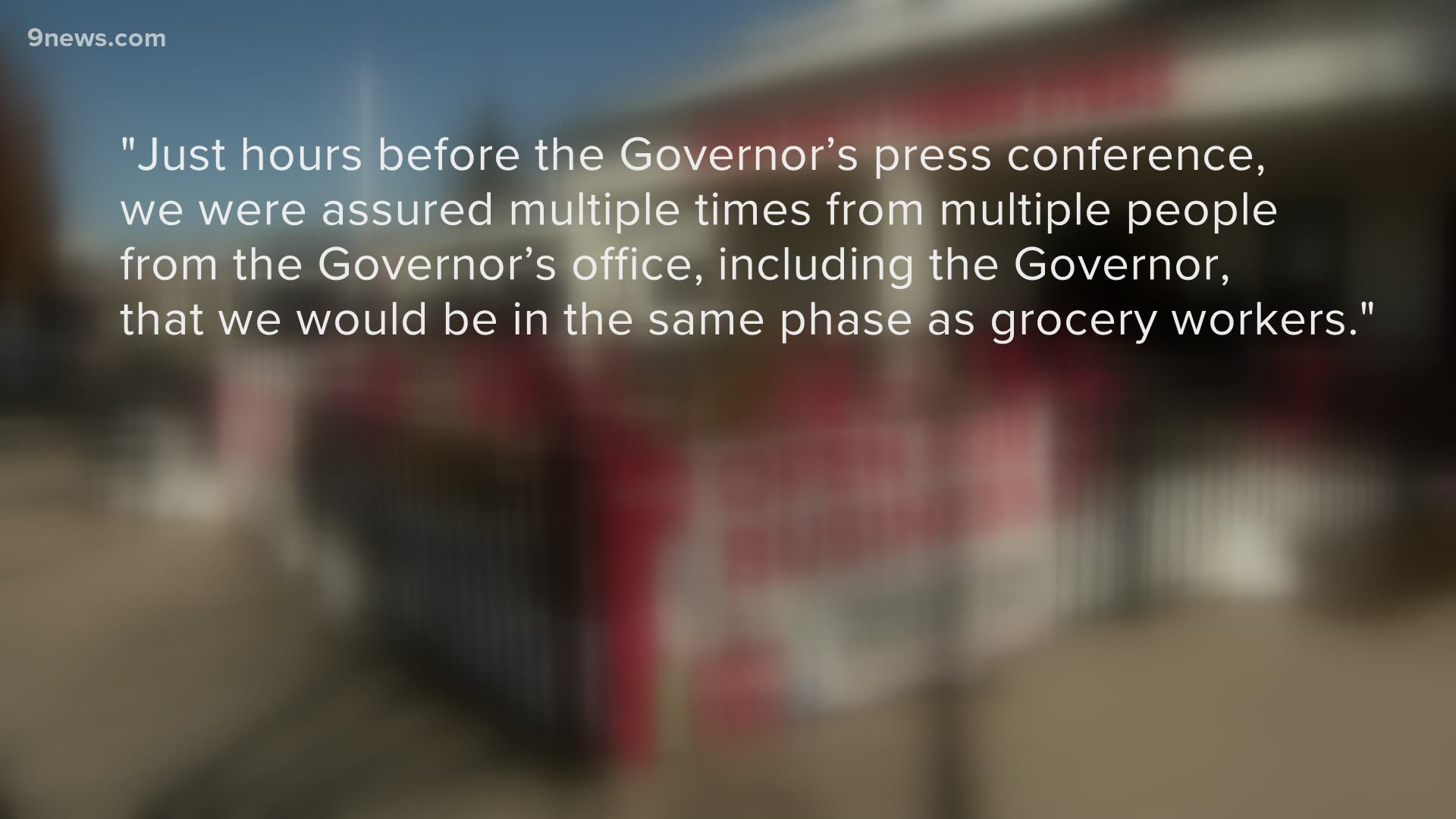 DENVER — The Colorado Restaurant Association released a statement Friday saying it was "shocked" by the state's updated COVID-19 vaccine schedule that put restaurant workers in a lower vaccination group than expected.

Gov. Jared Polis announced the next two phases of Colorado's COVID-19 vaccination plan on Friday. Restaurant workers are in Phase 1B.4, which likely will begin March 21. The earlier phase of 1B.3, which begins March 5, includes frontline essential workers in grocery and agriculture.

Sonia Riggs, the restaurant association's president, says in the statement that the association was "assured multiple times from multiple people from the Governor's Office, including the governor, that we would be in the same phase as grocery workers."

>> Video above: Vaccination phases: People have been moved up and down the list

“We obviously are disappointed in any further delays," Riggs says in the statement. "Our primary concern is the health and safety of our workers, who provide essential meals for Coloradans, just as grocery workers do. Splitting grocery workers and restaurant workers into two phases makes zero sense.

“It’s helpful that we now have a target date of approximately March 21, which will help deliver much-needed certainty to the restaurant industry. Unfortunately, this is another example of the goal posts being moved for the restaurant industry. About half of restaurants say they will close in the next six months if they are not allowed to more fully open. We are looking to the governor and his administration to offer certainty.”

The Governor's Office provided a statement in response that does not mention the association's assertion that it was told restaurant and grocery workers would be in the same phase:

“The Governor expects that the supply of vaccine will be enough to start on restaurant workers by March 21st along with other frontline essential workers, making Colorado one of the first states to make the vaccine available to restaurant workers and the Polis administration’s goal throughout this once in a century pandemic has always been to save lives while protecting the Colorado economy. Every Coloradan deserves the lifesaving vaccine and every Coloradan who wants it will get be able to get it soon, but we don’t receive enough for everyone to get it at once.“