Misty Russell received a Moderna vaccine from a batch linked to six allergic reactions at a site in San Diego. 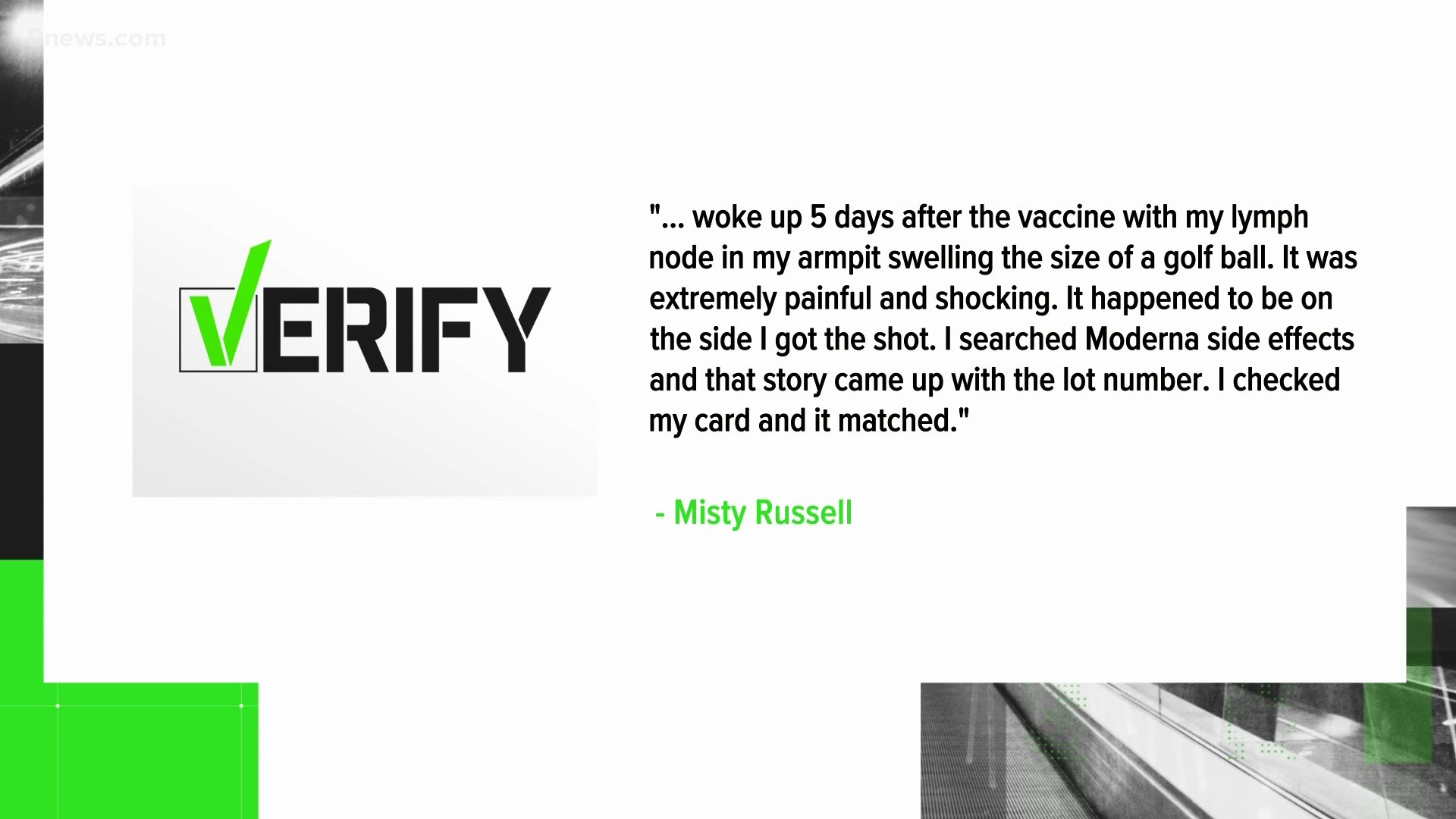 JEFFERSON COUNTY, Colorado — A Jefferson County woman who received a COVID-19 vaccine said a lymph node in her armpit swelled to the size of a golf ball days later. Misty Russell received a Moderna vaccine from a batch linked to six allergic reactions at a site in San Diego. The California state epidemiologist has asked providers in that state to hold off on administering more doses from that batch until an investigation is completed.

Russell said she’s in touch with her doctor to make sure there’s nothing more serious going on. But this kind of reaction is not completely unexpected.

“There's a fine line between activating the immune system to create antibodies and over activating the immune system just a little too much so that it could go into an allergic reaction,” said 9Health Expert Dr. Payal Kohli. “I'm not all that surprised that we have what's called lymphadenitis a little bit of inflammation in the lymph node. That's just a lot of those immune cells waking up.”

“It's so effective at revving up the immune system. Substantially more effective than, for example, the flu vaccine,” said Kohli. “Sometimes it can cause more of these types of immune reactions that, again, are just a marker of immune activation.”

California’s state epidemiologist said 330,000 doses of this particular batch were distributed statewide. It’s unclear how many were actually administered, but the six cases in San Diego appear to be the only adverse allergic reactions to the batch. The state of California is looking into why that is.

The Colorado Department of Public Health and Environment (CDPHE) did not respond to 9NEWS’ request for comment Tuesday night. But Jefferson County Public Health, where Russell received her vaccine, said they’re unaware of anyone taking a dose from that batch having an allergic reaction.

Kohli said this case is likely more about the individual than it is about the vaccine itself.

“It's more how does the vaccine, you know, gel with our medical history our allergic history. Are we somebody who tends to be atopic?” asked Kohli. “Is their immune system very hyper-reactive? Those are the risk markers of those types of people that have the life-threatening allergic reaction. So it’s not necessarily the vaccine’s fault entirely.”