Latinos in Colorado continue to face challenges getting vaccinated

SCL Health and community partners brought 5,000 vaccines to the National Western Complex over the weekend. 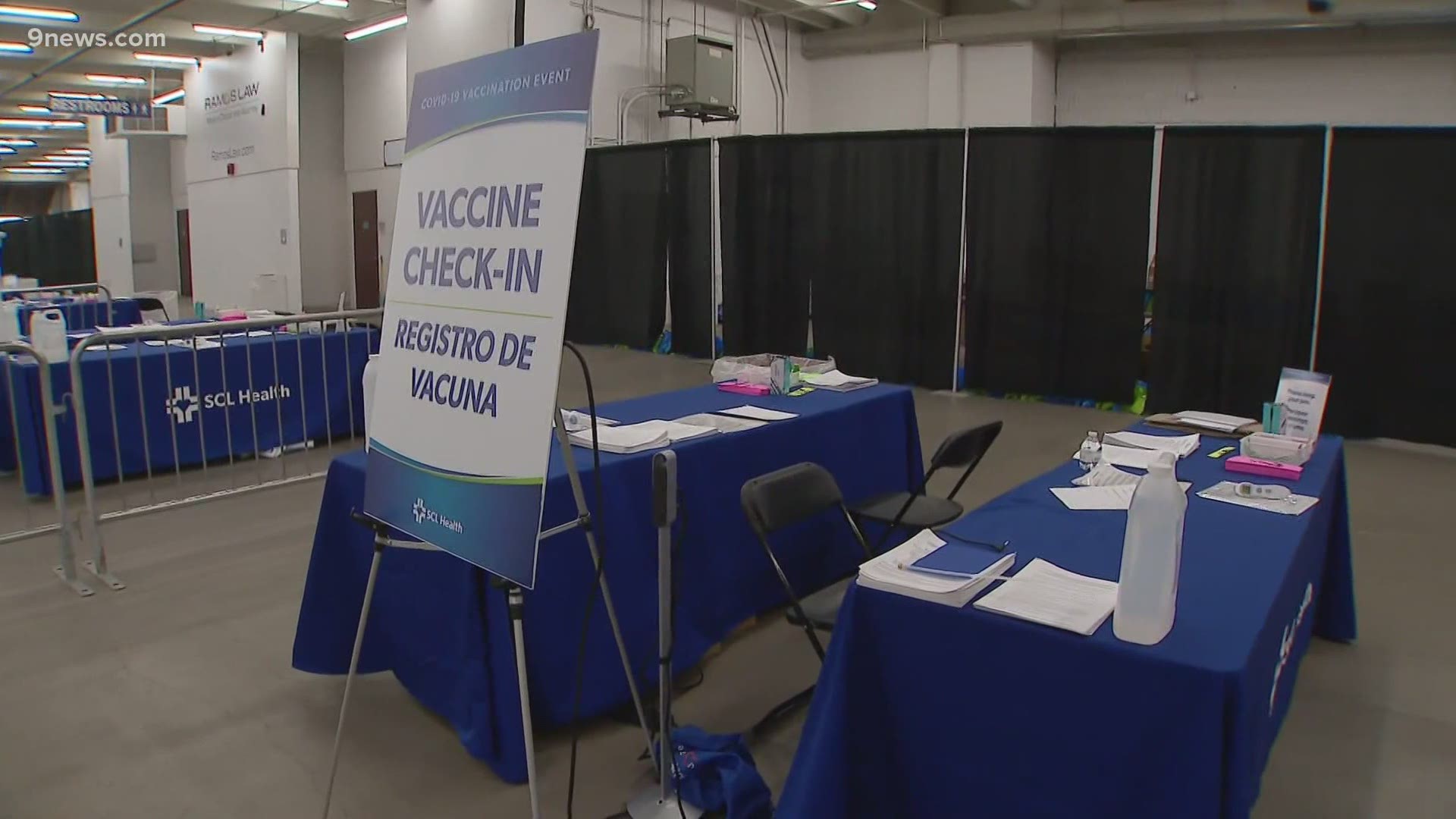 DENVER — To prioritize vaccines for the Black, Native and Latino communities of Colorado, SCL Health partnered with 39 community organizations to bring just over 5,000 vaccines to the National Western Complex last weekend.

That's where community leader and local advocate Ezzie Dominguez was finally able to get a dozen of her neighbors signed up to be vaccinated Saturday.

"I wish I could have helped thousands, but I was only able to help 10 sign up. And then my husband and me, so that's 12 of us," Dominguez said Monday.

Immunocompromised, a cancer survivor and newly pregnant, Dominguez tried for weeks to get her mother and neighbors in the Denver community of Westwood signed up to receive their COVID vaccines.

"I think the fear right now is of being left behind," Dominguez said. "I think at the beginning, the fear was that my community didn't want to get the shot – they were scared of it. But I think the fear now is, 'Are we going to be left out of getting a vaccine at all?'"

According to Denver Public Health and The Denver Department of Public Health & Environment (DDPHE), Denver's population is 29% Latino and 55% white.

Without people like Dominguez, the gap would be even wider.

Credit: The Denver Department of Public Health & Environment
COVID-19 vaccination by race and ethnicity in Denver as of 2/8/21.

"Many people lack health insurance. When you don't have health insurance, you are not going to be in any of those health clinic systems," she said. "My mom, for example, doesn't speak English. She's a first-generation immigrant. Unfortunately, some of the information is not even available in Spanish. It’s mostly in English, so if you are a non-English speaker, you're out of luck."

Finally, Saturday, a victory: Dominguez secured a dozen appointments at SCL Health's mass vaccine clinic at the National Western Complex for herself and 10 neighbors.

In a release, SCL Health called Saturday's event, "an effort to reach vulnerable populations in underserved communities of color that had not yet had the opportunity to get vaccinated."

SCL Health provided the following statement to address some of the concerns raised by Dominguez:

“SCL Health is committed to providing the COVID-19 vaccine to as many members of our community as possible, as quickly and safely as possible, with special focus on the people hardest hit by the pandemic. At the COVID-19 Vaccination Event on Saturday, Feb. 6 we vaccinated 5,000 people with two goals: To save lives and slow the spread of the virus. To accomplish the goal of reaching the most underserved, SCL Health worked closely with 39 non-profit and community-based organizations to eliminate as many barriers as possible to receive the vaccine. SCL Health provided translation support before and during the event through our community partners and our hospital interpreters, provided on-site ambassadors to help community members who were monolingual, and worked with DRCOG’s Area Agency on Aging to provide transportation to those who needed it. In addition, most of our signage and paperwork was in English and Spanish. Consistent with our mission to improve the health of people and communities we serve, especially underserved and vulnerable populations, SCL Health will continue to work with its community partners and remove as many barriers as possible to receiving the vaccine. We are grateful for the opportunity to serve all members of the community."

Dominguez said she was grateful, but she also saw several familiar faux pas at the clinic, oversights she said she's seen before in the state's efforts to reach her community and other communities of color during the pandemic.

"How user-friendly was it in Spanish? It absolutely wasn't," she said.

According to Dominguez, who had pictures of the forms she and her neighbors were given, all were in English, with the exception of the consent form, which was offered in both Spanish and English. Dominguez also had a recording of the radio station meant to instruct and inform patients about the vaccine and the vaccination process, which she said was also not offered in Spanish.

"It was just kind of like a loop message telling you what you were there for, who could go in with you, where to park, how to take the little shuttle, what to do," Dominguez explained. But, she said, it was all in English.

It amounted, she said, to a vaccination process that she felt her neighbors would not have been able to manage without her as a translator.

"We are the workforce, and our workforce has been getting exposed to COVID," Dominguez said. "Now that there's a vaccine, that same workforce who is out there putting food on people's tables is being left behind."

Dominguez said she would like to see the state and its health partners do more to reach communities of color by working with the communities themselves in native language, while moving away from the lottery system that in her opinion is contributing to the growing gap in Latino vaccinations. To improve reach, they need to create trust and access, she said.

"It can't be survival of whoever has more technology, whoever can navigate the phone lines, whoever can figure out the appointment system," Dominguez said. "I want my community to start being in a statistic of how many of us are getting our vaccines and staying alive."