The Center for Disease Control and Colorado health officials determined there is no cause for concern surrounding the vaccination halt at Dick's Sporting Goods site. 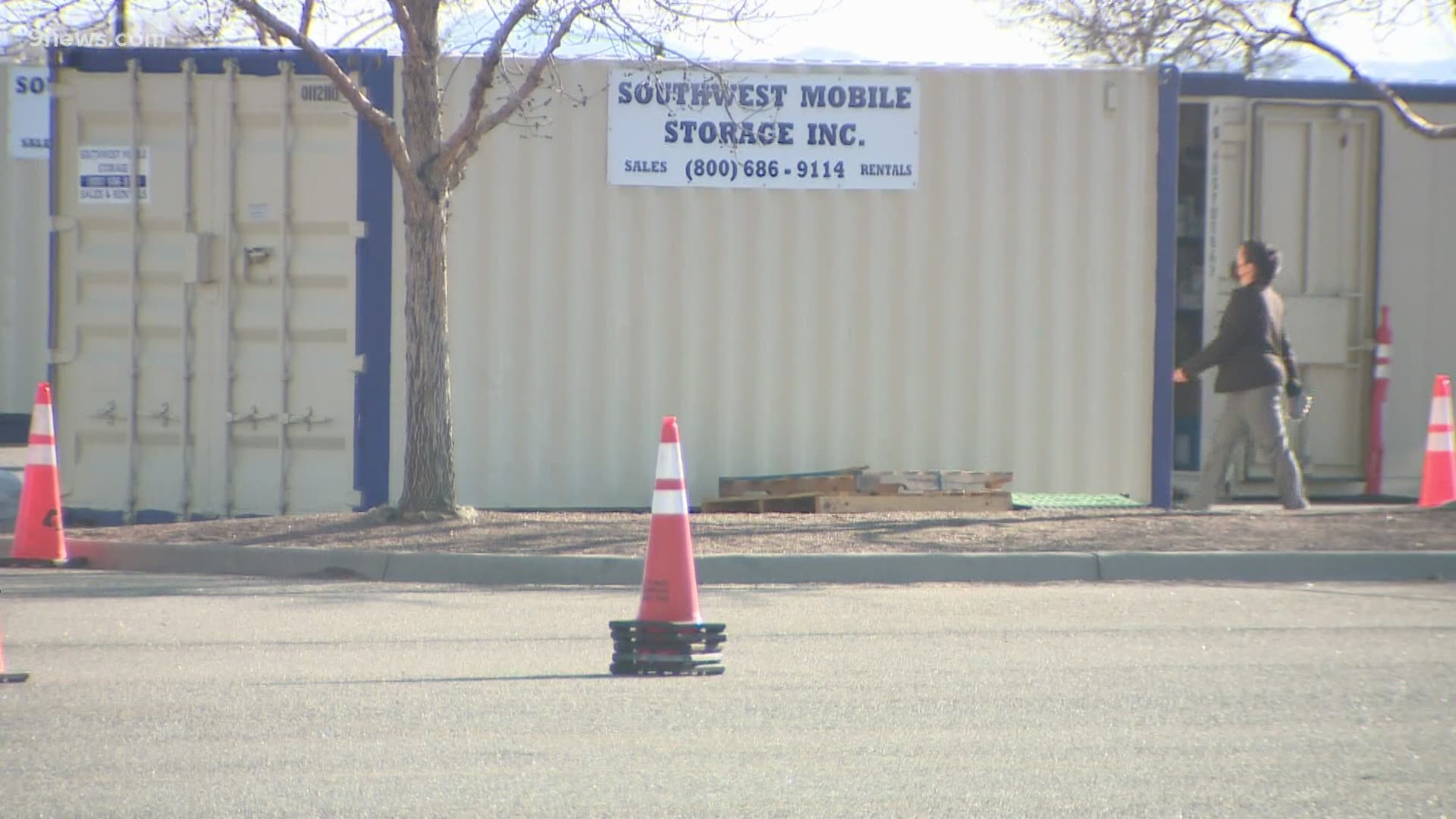 DENVER, Colorado — Officials are continuing to emphasize the safety of COVID-19 vaccines after 640 people were turned away from the mass vaccination site at Dick's Sporting Goods Park after some recipients of the Johnson & Johnson vaccine onsite had an adverse reaction, according to a spokesperson for Centura Health.

“After reviewing each patient’s symptoms, analyzing other vaccinations from the same lot of the vaccine and speaking with the CDC to confirm our findings, we are confident in saying that there is no reason for concern,” said Dr. Eric France the chief medical officer with CDPHE. “We are committed to making sure every community clinic is well-staffed with medical professionals who take patient safety with the utmost seriousness, just as they did at yesterday’s clinic.”

CDPHE is following up with each patient that experienced symptoms on Wednesday. In addition, the Food and Drug Administration has run the two lot numbers used at the Dick’s Sporting Goods site and said they found no worrying pattern of similar events with these lots.

Of the more than 1,700 people who received vaccinations at the site Wednesday, Centura Health said 11 patients experienced symptoms like nausea and dizziness.

Medical staff on site determined two individuals required additional observation and out of an abundance of caution, Centura transported them to nearby hospitals. They were released the same day, officials said during a Thursday afternoon news conference.

"We followed up with those who were in the hospital. They all went home," said France.

About 640 patients were turned away and will be automatically rescheduled for another vaccine clinic on Sunday, April 11, Centura Health said. The site will be administering Pfizer doses on Sunday, which were previously allocated and scheduled for use for Sunday’s appointments.

Officials said appointments were postponed for the rest of the day Wednesday as a precaution as they investigate. The batch of the vaccine used for the event has also been sequestered and will be investigated.

"There doesn’t seem to be any issue with these vaccine batches. Each of them has a lot number and those lot numbers are tracked. If any site across the nation is finding reactions associated with the lot number, the FDA will see that in their data sets. Last night I was speaking with the CDC about these events and then they forwarded these lot numbers on to the FDA. This morning we were told there was no increase in events with these lot numbers," said France.

"Even today we were using the same lots because, after my review, it’s clear that these doses were causing the kinds of side effects that you see with many medical procedures," said France.

Dr. Shauna Gulley, Centura's senior vice president and chief medical officer, said the adverse reactions ranged from lightheadedness and nausea to low blood pressure and hypotension. None of the 11 people with symptoms were considered high risk.

“The vast majority of adverse reactions we saw yesterday were quite mild, most people felt better just after some observation and rest," she said.

The Colorado Department of Public Health and Environment (CDPHE) emphasized people should continue booking appointments if they have not already received a vaccine.

“We’re committed to providing safe community clinics, and we are so grateful that the clinic today properly observed and helped patients with immediate side effects. We know it can be alarming to hear about people getting transported to the hospital, and we want to reassure Coloradans that the CDC and public health are closely monitoring all the authorized vaccines continually. From what we know, today’s side effects were consistent with what can be expected,” said Scott Bookman, COVID-19 Incident Commander on Wednesday.

“Getting a vaccine is far safer than getting severely sick with COVID-19. It’s why I got the vaccine, and why I’ve wanted my family to get it. Based on everything we know, it remains true that the best vaccine to get is the one you can get the soonest. Thank you to everyone who had to reschedule their appointments for their patience today,” Bookman said.

WATCH: What's the standard for making the decision to pause a vaccine event? 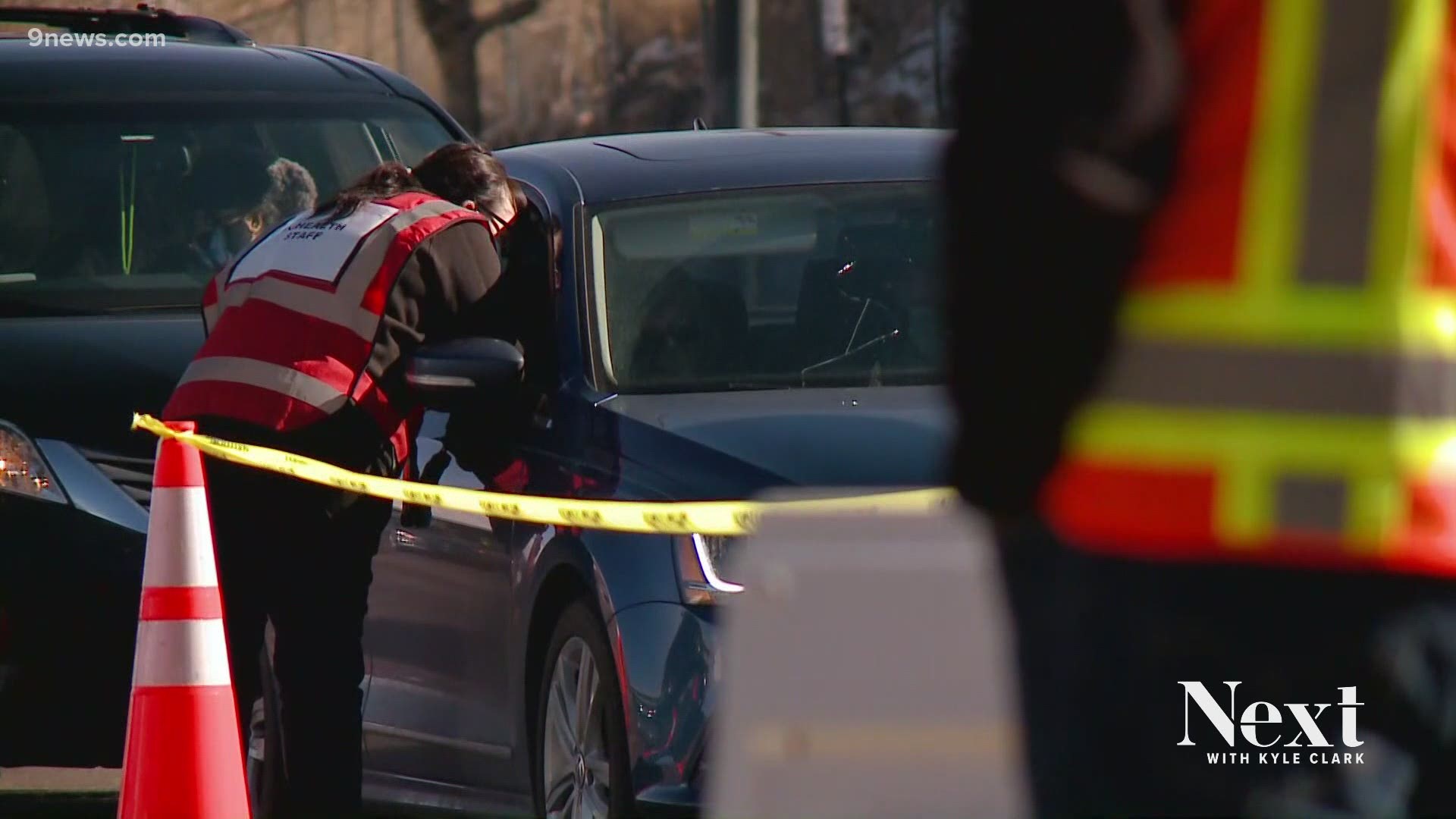 "The Colorado Department of Public Health and Environment is in communication with the CDC and FDA regarding the temporary suspension of vaccinations at Dick’s Sporting Goods Community vaccination site yesterday and the Johnson & Johnson vaccine. We currently believe that the dizziness and other symptoms experienced are consistent with what can be expected of any similar medical procedure, however we are conducting an exhaustive review and are following up with patients from yesterday."

According to VAERS, the Vaccine Adverse Event Reporting System, there have been 10 previous reactions documented at Community Vaccine Sites prior to today. VAERS is co-managed by the Centers for Disease Control and Prevention (CDC) and the U.S. Food and Drug Administration (FDA).

In its first weekend of operation beginning March 27, the mass vaccination site in Commerce City experienced long lines of cars and frustrated people.

Some told 9NEWS they waited in line for as long as three hours that Sunday at the mass vaccination site at Dick's Sporting Goods Park.

Those who signed up to receive a vaccine at the site were told to expect a 15- to 30-minute wait.

"[COVIDCheck Colorado] have adjusted their resources and are working quickly to improve wait times," said Centura Health in a statement. "Centura is committed to honoring all vaccine appoints and will not turn anyone away who scheduled a time to receive their first dose."

RELATED: Emergent BioSolutions, Maryland company that had to discard 15M J&J vaccines, had history of violations

Johnson & Johnson said Wednesday that a batch of vaccine made by Emergent BioSolutions at its Baltimore factory, known as Bayview, cannot be used because it did not meet quality standards. It was unclear how the problem would affect future deliveries of J&J’s vaccine. The company said in a statement it was still planning to deliver 100 million doses by the end of June and was “aiming to deliver those doses by the end of May.”

The company at the center of quality problems that led Johnson & Johnson to discard 15 million doses of its coronavirus vaccine has a string of citations from U.S. health officials for quality control problems.

Emergent BioSolutions, a little-known company vital to the vaccine supply chain, was a key to Johnson & Johnson’s plan to deliver 100 million doses of its single-shot vaccine to the United States by the end of May. But the Food and Drug Administration repeatedly has cited Emergent for problems such as poorly trained employees, cracked vials and problems managing mold and other contamination around one of its facilities, according to records obtained by The Associated Press through the Freedom of Information Act. The records cover inspections at Emergent facilities since 2017.