KUSA - This story is a very personal one for me. My father was a firefighter who lost his battle with cancer.

After 32 years with the Los Angeles City Fire Department, he was diagnosed with acute lymphoblastic leukemia and multiple myeloma: Two cancers that doctors directly attribute to the fire service.

He lost his battle just six months after diagnosis at the age of 57.

Additionally, I serve on the Colorado Professional Fire Fighters Foundation board where we give grants to firefighters and their families going through tragedy which includes cancer.

That was my inspiration to dig deeper and find out what the actual statistics are for firefighters being diagnosed with cancer, what's being done to prevent it and what our state's Presumptive Cancer Law looks like once a firefighter has to apply.

Firefighters know danger is part of their job: running into burning buildings, going on rescues and fighting wildfires. However, many of them didn't realize when they signed up that cancer would also be one of the things they fight in their career.

Richard Pula has been a Denver firefighter for 15 years. In that time he was been on more than 3,000 calls.

In 2015, Pula was diagnosed with stage 4, Non-Hodgkin's lymphoma. He's is just one of hundreds of Colorado firefighters who have been diagnosed with cancer. 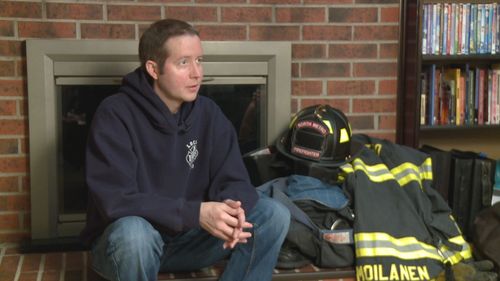 North Metro Firefighter Craig Moilanen was diagnosed with acute lymphoblastic leukemia two years ago. In that time, he was gone into remission twice, received a bone-marrow transplant and now the cancer has returned.

"Currently I am going through chemo right now. I've applied for disability at this point since it's been such a long process," Moilanen said. "Now, we are at a point where we are looking for a research study across the nation to eradicate this from my body."

"A number of recent studies really show there is an increased risk in certain cancers in firefighters," Dr. Virginia Weaver, an Associate Professor at the Johns Hopkins University of Public Health, said.

"The study looked at 20 different cancers and discovered that 10 of them or 50 percent were statistically significantly increased which is pretty dramatic," Dr. Weaver said.

But those numbers don't tell the whole story. You have to take into consideration that firefighters are healthier than the general public to begin with.

"The healthy worker effect is where sometimes you see that workers are at less risk of certain diseases, and firefighters would be part of that population because their jobs require physical fitness they tend to eat healthier," Dr. Annyce Mayer, Director of Occupational and Environmental Health Studies at National Jewish Health, said "They have a lower instance of obesity and other things that have been linked to cancer so we might expect that firefighters would have lower risk."

The International Agency for Research on Cancer lists 11 chemicals found in smoke that are known to cause cancer such as arsenic, asbestos, benzene and soot.

"Three of the years I was on the hazmat team going into the most caustic environments that we have," Pula said.

Pula's doctors have said from the beginning his cancer is from the career he loves so much, and despite that, he still plans on returning.

"I very well could die, but at no point did it even enter my mind I would not be doing this again, so it's that much a part of you," Pula said.

The Fallen Fire Fighter's Memorial is located in Colorado Springs and includes the names of every firefighter from the U.S. who has died in the line of duty dating back to 1918.

If a firefighter gets cancer that's directly attributed to the fire service, it is considered a line of duty death. Sixty percent of the names that have been added to that wall in the last few years have been for that very reason.

So what's being done to prevent firefighters from getting cancer in the first place?

What is in the smoke and soot - carcinogens like arsenic, asbestos and benzene - is causing cancer in firefighters.

"It absorbs through your skin, your mouth, your nose, your eyes, your neck. You can't see it, taste it or sense it going into your body, but it's there," Denver Fire Assistant Chief CJ Haberkorn said.

Haberkorn says those chemicals weren't always part of the job.

"If you go back to the 1970s and 80s, homes were built with large dimensional lumber. You didn't have glues, laminates, foams and plastics in the carpets. When those things burn, they burn hotter, and the toxic byproducts and combustion that come out are the things that are taking firefighters down," Haberkorn said.

"When I came on in 2002, we had good equipment – the best equipment you could have at the time, and we thought we were doing everything right," Pula said.

They didn't realize it at the time, but they weren't doing everything right. Firefighters used to sleep with their gear by their bed.

"What we have learned since then is those bunkers are off-gassing carcinogens, so you're sleeping right next to what you fought a fire in, and there's thousand of chemicals you're exposed to in just a regular house fire," Pula said.

Now, once they come out of a fire, they pack the gear up and send it off to be cleaned and have a spare set of gear ready for the next call. You've most likely seen images of firefighters with soot on their face, their neck and their hands. Years ago, that was like a badge of honor.

"If your helmet was dirty, you were hardcore," Pula said.

Now, they've learned it's those chemicals that are causing cancer, so fire departments across the country are requiring firefighters to immediately shower after a call.

Another change is to what's called their SCBA or self contained breathing apparatus.

"The emphasis in the past decade has been to wear the SCBA in the overhaul which is the period when the fire is out and the firefighters are looking through the fire for any areas that could reunite," Dr. Weaver said. "Traditionally, they used to remove their SCBA thinking they were doing a better job thinking that they would have all of their senses and get better detected ignition sites. Turns out, they inadvertently expose themselves to a number of carcinogens still present in the air while trying to do their job."

"So now, from the time you arrive at the fire to the time you leave, your face piece is on so you're getting 100 percent fresh air," Haberkorn said.

Firefighters know a lot has changed in recent years but also that a lot still needs to be done.

And better equipment and techniques will help protect future firefighters.

"For the firefighters that are starting out now, I think it's awesome because hopefully they start out with good practice from day one to where they wear all the stuff and know about the advancements that are out there," Haberkorn said. "It's the guys that have been on for 20 to 30 years that maybe weren't doing everything right that keeps you up at night - myself included."

It's a part of the job many of them didn't know about when they signed up, but they all know about it now.

It's been six years since Jeff Christ passed away. He was a firefighter for more than 25 years and loved every day of it.

In 2007, doctors diagnosed him with stage 4 glioblastoma, which is brain cancer. After two years of fighting, Christ passed away at the age of 52. His case was supposed to qualify for workers compensation.

"What it does is creates a presumption that a firefighter ... who did not have any signs of cancer before they started working as a firefighter if they get cancer- it's presumed to be associated with their job as a firefighter," Naomi Perera, a Worker's Compensation lawyer, said.

Colorado is currently one of 33 states that have some form of presumptive cancer law. In Colorado, if a firefighter has five or more years in the fire service and is diagnosed with one of five specific cancers (brain, skin, hematological (blood cancers), intestinal cancer and genitourinary cancer, such as prostate cancer) then he can apply for workers compensation which helps with medical bills and lost income but often it takes years to settles the cases.

That's because those claims are handled by each individual city government or fire district's Risk Management group. Their job is to balance the budget so they thoroughly investigate and try to find out if the firefighter's cancer came from something outside the job. This is complicated and time consuming.

For example, Jeff Christ filed his case in 2007, but it still isn't approved - six years after he died. Pula is still early in the process having filed in March but says it's been frustrating.

"I don't believe they have anything to point their finger at that may have caused this besides fire. I've got over 1,000 runs where I was exposed to carcinogens, and I can't point to anything that I've been exposed to in my personal life, so I don't see what they're hiding behind," Pula said. "If they can't point to what caused my cancer, they have no choice to pick it up and accept right? Except they haven't. They've denied, and I am going to have my day in court."

Perera says the law has problems.

"There is no timeframe [to settle a claim,] and the other thing is that there are multiple levels of appeal. It's just not, I believe, what the legislature intended at all. It's a miscarriage of justice and not the way the statue was really intended to work," Perera said.

So what can be done? Pula says step one: Give a deadline.

"Other states, like California, where they have a penalty process, 90 days to make your decision which would be a great thing for us," Pula said.

Perera says another way would be to change the language in the statute.

"For example say 'clear and convincing' as opposed to 'preponderance' that might be one way to ameliorate it," Perera said.

She also says, and most firefighters agree, a good solution would be to look completely outside of the workers compensation system.

"For example just allowing for a general insurance policy that automatically covers firefighters if they get cancer. That might very well provide a cost effective, good approach to solving the problem," Perera said.

Several groups are working with the Colorado legislature to study these solutions for firefighters and their families and get those who help us everyday the help they need faster.