February is American Heart Month and this week the American Heart Association wants to draw more attention to CHD. To do this, its volunteers are delivering little red hats to babies in the hospital who have the heart disease. 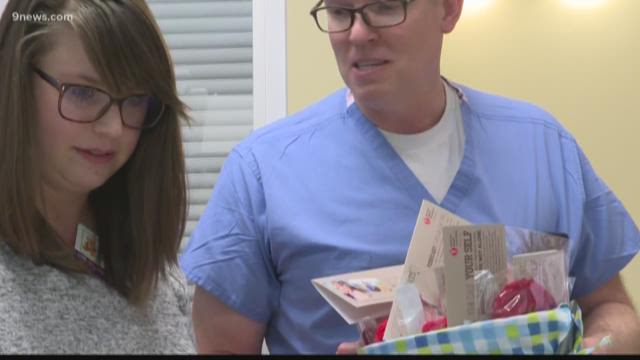 Seven out of every 1,000 babies are born with a heart defect, which means nearly one percent of children have congenital heart disease (or CHD). It could be minor and not require any special care at all, but it could also be severe and lead to multiple operations.

One recipient of the Little Hats, Big Hearts initiative is baby Lucia, who’s in the NICU at Rocky Mountain Hospital for Children.

“She was born with Down syndrome and had some gastric issues so she had surgery last Friday and will have another surgery in the spring for her heart defect,” Kristen Espino, Lucia’s mother, said.

According to Pediatric Cardiothoracic Surgeon Dr. Steven Leonard, about 50 percent of babies with Down syndrome will have some form of a heart defect. In Lucia’s case, it’s a hole in her heart.

“This would be a defect that I would consider the first operation could to be a cure, although some of those patients will come back and require more surgery,” Leonard said.

Lucia’s mom is just starting to learn what the disease is all about, and feels a little more at ease knowing that the more people learn about CHD, the less alone she’ll feel in it all.

“It’s nice to know other people have paved the way for us…that they’ve gone through similar situations, we’re not alone and there’s hope,” Espino said.

Leonard said the American Heart Association creating awareness for CHD is invaluable in being able to provide some of the resources needed for research.

“Most families are not going to come in contact with congenital heart defects, so the vast majority of the American population walks around every day never thinking about what it’s like having a baby with a heart defect,” Leonard said. “These programs are very critical because it’s important to get the support from the general population when it comes to research and development of new products.”