October is Breast Cancer Awareness Month. This is one survivor’s story

Stacey Hirschfield was 33 years old and the mother of a newborn when she first found a lump in her breast. 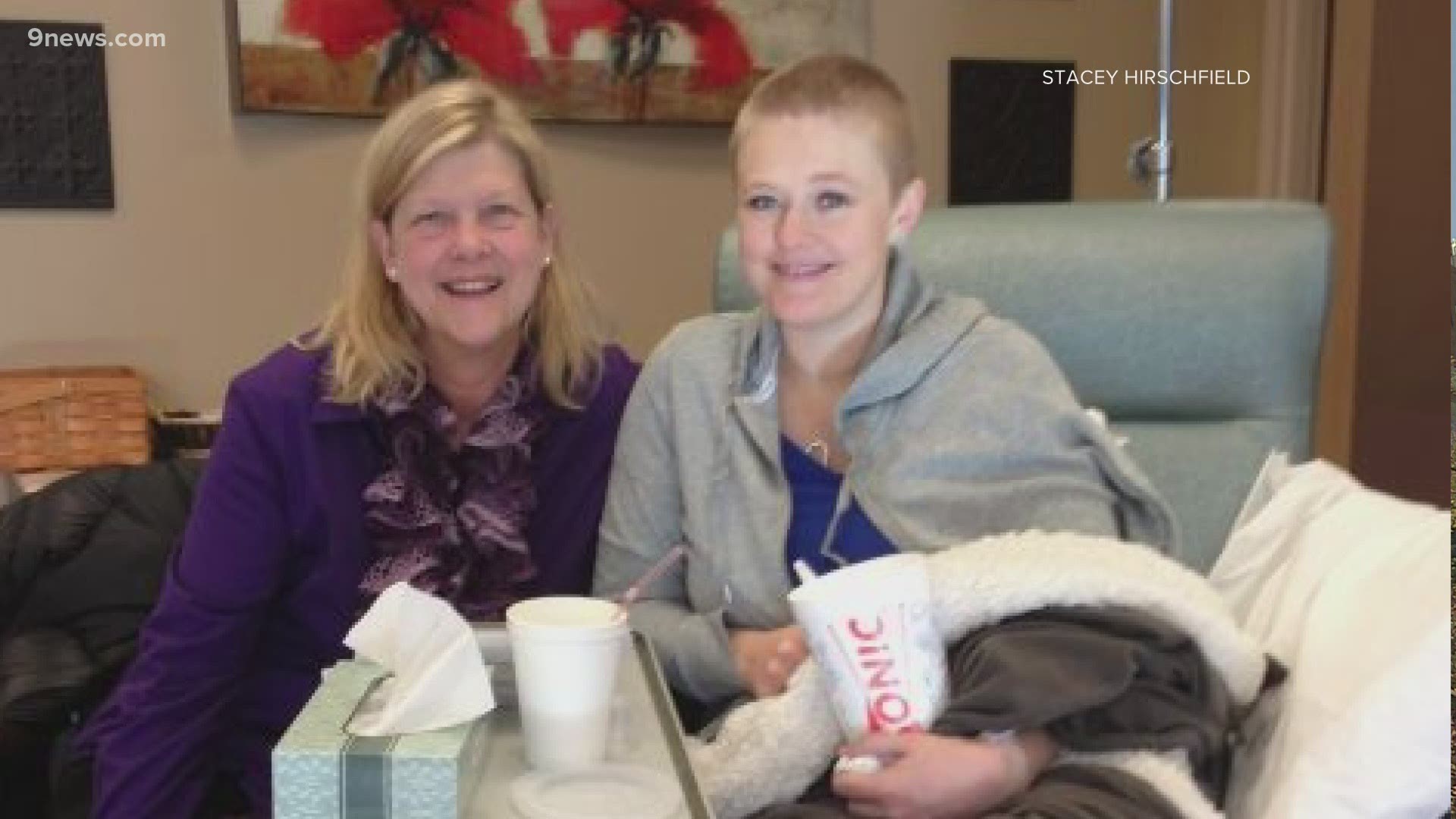 It was 2012. She was 33 years old and working as an operating room nurse at the Medical Center of Aurora. She and her husband just welcomed their first child, a baby boy named Austin.

Then she found something odd.

“I was pumping, breastfeeding at the time,” she remembered. “And I noticed a lump. And at first, I thought, 'Oh this is breastfeeding, you’re engorged, lumpy. Maybe that’s what it was.'”

But as weeks passed, the lump got bigger. She said she had a feeling this wasn’t a breastfeeding problem.

Hirschfield took the question to her doctor, who she said immediately ordered tests.

“December 14th, 2012, I got my core biopsy results: It was metastatic, invasive, ductal, in situ, breast cancer,” she said. “They also noticed the cancer had grown out of the duct and into a lymph node in my chest.”

Hirschfield said the doctors also found a nodule in part of her lung.

“The oncologist really staged it as Stage 4 at that point. And I started my journey with chemo.”

RELATED: Renoux(ed) strength: Matt and his wife lean on each other after her cancer diagnosis

Hirschfield said her only family history of breast cancer was an extended relative. While her son was still a baby, she started chemotherapy, a drug treatment and eventually had two mastectomies.

The American Cancer Society says the median age for a woman at the time of a breast cancer diagnosis was 62, from 2002 - 2016. Risk increases with age.

About 4% of women diagnosed with breast cancer are younger than 40.

“The adolescent young adult population is defined as anyone ages 15-39. Breast cancer is actually the highest incidence of cancer among that age group, which an incidence of around 6%, roughly,” explained Dr. Manoj Bupathi, a medical oncologist with the Medical Center of Aurora and Rocky Mountain Cancer Centers. “And usually those patients that end up developing cancer at that age group have some sort of familiar predisposition. They tend to have more aggressive disease. The biological characteristics tend to be more aggressive. The stage of diagnosis tends to be more aggressive as well.”

Because these patients are younger, many still in their childbearing years, and often with the possibility to survive decades longer than their diagnosis, Bupathi said doctors will consider these factors when reviewing treatment options.

“There’s a bulk of things that have to be in place, specifically for survivorship,” he explained. “So while we’re always focused on the now, there’s always a look ahead. We always try to incorporate social workers, genetic counselors, to understand and know that this is a temporary step. And our goal is that they’re going to have a normal life span going forward.”

Hirschfield said she knew more babies could be risky. Perhaps, even, impossible.

“The chemotherapy I had to take would put me in menopause," she said. "[My doctor] didn’t know after my therapy if my periods would return, if I would have [the ability to have more children] or if it would have been stolen from me. “It was a fight in my brain. I didn’t know if I had the BRCA (breast cancer) gene at that point. I didn’t know if it was something that would be passed along to other children. I was worried if I’d be there for Austin, let along bring another child into the world and not be there for them.”

Hirschfield said she turned to her faith for answers.

“I just prayed about it. If this happened naturally, which - it did,” said explained. “And I have Brody now. And he’s three.”

Hirschfield is now 41 years old, with a family of four. And she counts more than five years of good health.

“They always say I’m disease free, no evidence of disease. Which I’m so grateful for every day.”

She also continues to work at the Medical Center of Aurora, the same hospital where she has been a patient. Her cancer journey is an experience she shares with her own patients now, including some facing a cancer diagnosis.

“I can actually share that hope of, you can do this and you are strong and you can really attack it and fight this.”

“Stay on top of screenings," Dr. Bupathi encouraged. “Screening mammograms do save lives. They’re very, very important. Especially for those that have risk factors, and maintaining a healthy, balanced lifestyle.

“If you notice something, if something doesn’t feel right, really seek out someone to listen to you and advocate for yourself,” Hirschfield added.

RELATED: Breast cancer charities: Where to give and where to avoid