Pediatrician calls vaping a plague upon the teenage landscape

Recent surveys suggest a majority of kids don't necessarily see vaping as dangerous, and most try it out of curiosity. 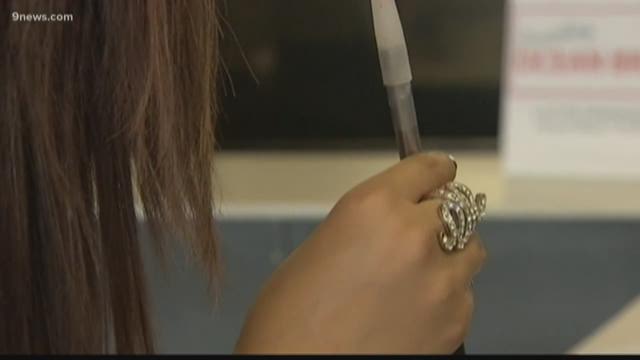 A pediatrician who works at a clinic in Golden wants more parents to pay closer attention to what their kids are being exposed to at school.

Dr. Jim Campbell is the parent of two high schoolers himself, and based on the kids he’s been seeing in his clinic, he says he feels compelled to warn families about the prevalence of vaping at schools in the Denver area.

“Every high schooler is aware of vaping,” Dr. Campbell said. “They see it in the hallways, in the bathrooms, they even see kids vaping in class.”

Vape pens come in many shapes and sizes.

Many devices are small enough to be hidden inside other items commonly found in schools such as albuterol inhalers, sharpie markers and replica ball point pens.

One popular product looks a lot like a thumb drive.

“Probably the most common device that kids in the Denver metro are using is a vaping pen called the JUUL,” Dr. Campbell said. “It’s so easily concealed.”

Recent surveys suggest a majority of kids don’t necessarily see vaping as dangerous, and most try it out of curiosity.

The research found many children think vape pens only contain flavoring, and aren’t aware it’s full of highly addictive nicotine and other chemicals.

“They’re inhaling a mix of antifreeze, of heavy metals that come off the coil – carcinogens like formaldehyde that are also created in the aerosolized smoke,” Dr. Campbell said. “And then there’s the active ingredient which is one of the more addictive compounds known to man.”

And each flavored cartridge for the JUUL device for example is roughly equivalent to a pack of cigarettes in terms of nicotine content.

But unlike a cigarette that burns to ash forcing the smoker to light a new one, there is little to prevent a person who is vaping from unknowingly inhaling much larger doses of nicotine.

“Nicotine has effects on the cardiovascular system,” Dr. Campbell said. “It can drive hypertension. It can cause heart disease. We know in the brain, it’s highly addictive. It creates irritability, affects working memory. It creates emotional dysregulation. And these are all things kids experience, and then they realize what’s happening to their bodies past the point of addiction.”

Dr. Campbell says kids are more susceptible to nicotine addiction because their brains are still developing.

And since vape products use liquid nicotine, the drug’s concentration can be highly manipulated when it’s manufactured.

“Unfortunately, because the drug concentration is so much higher in a vape pen, the time that kids will become addicted to it is shorter,” Dr. Campbell said. “We’ve had patients that seem to become addicted to it in less than 48 hours. The research would indicate that those kids that become addicted as adolescents are more likely to carry their addictive habits with them throughout their whole lives.”

The good news is Dr. Campbell says the most powerful thing a parent can do in response to all this is free and effective.

Dr. Campbell says kids typically like dishing about other kids. So, a parent might start the conversation by asking about what their student is seeing other kids do at school.

He says it’s good for the child to know the parent is aware of vaping, interested in it, and knows it’s harmful.

“You’re really trying to engage them in the conversation so they feel more at liberty to tell you about it,” Dr. Campbell said. “There’s so much coming at our kids in the current age that was not coming at parents my age when we were kids.”

Dr. Campbell says there’s a notion that somehow vaping is better or safer than smoking cigarettes, and that is just not true.

“It’s really a bit of a plague upon the teenage landscape,” Dr. Campbell said. “These are companies that are not trying to help kids relax and have a good time. They are most interested in cultivating a generation of nicotine addicts because it’s very profitable.”

After talking to Dr. Campbell, 9NEWS reached out to about half a dozen local vape shops. They say their products are for adults only.

“JUUL Labs’ mission is to eliminate cigarette smoking by offering existing adult smokers a true alternative to combustible cigarettes. JUUL is not intended for anyone else. We strongly condemn the use of our product by minors, and it is in fact illegal to sell our product to minors. No minor should be in possession of a JUUL product.

Our goal is to further reduce the number of minors who possess or use tobacco products, including vapor products, and to find ways to keep young people from ever trying these products. We approach this with a combination of education, enforcement, technology and partnership with others who are focused on this issue, including lawmakers, educators and our business partners."