Twins with OCD find a new way to cope

Two 31-year-old Broomfield women finally have a shot at a fulfilling life for the first time in three decades, thanks to an old procedure which has a new purpose. 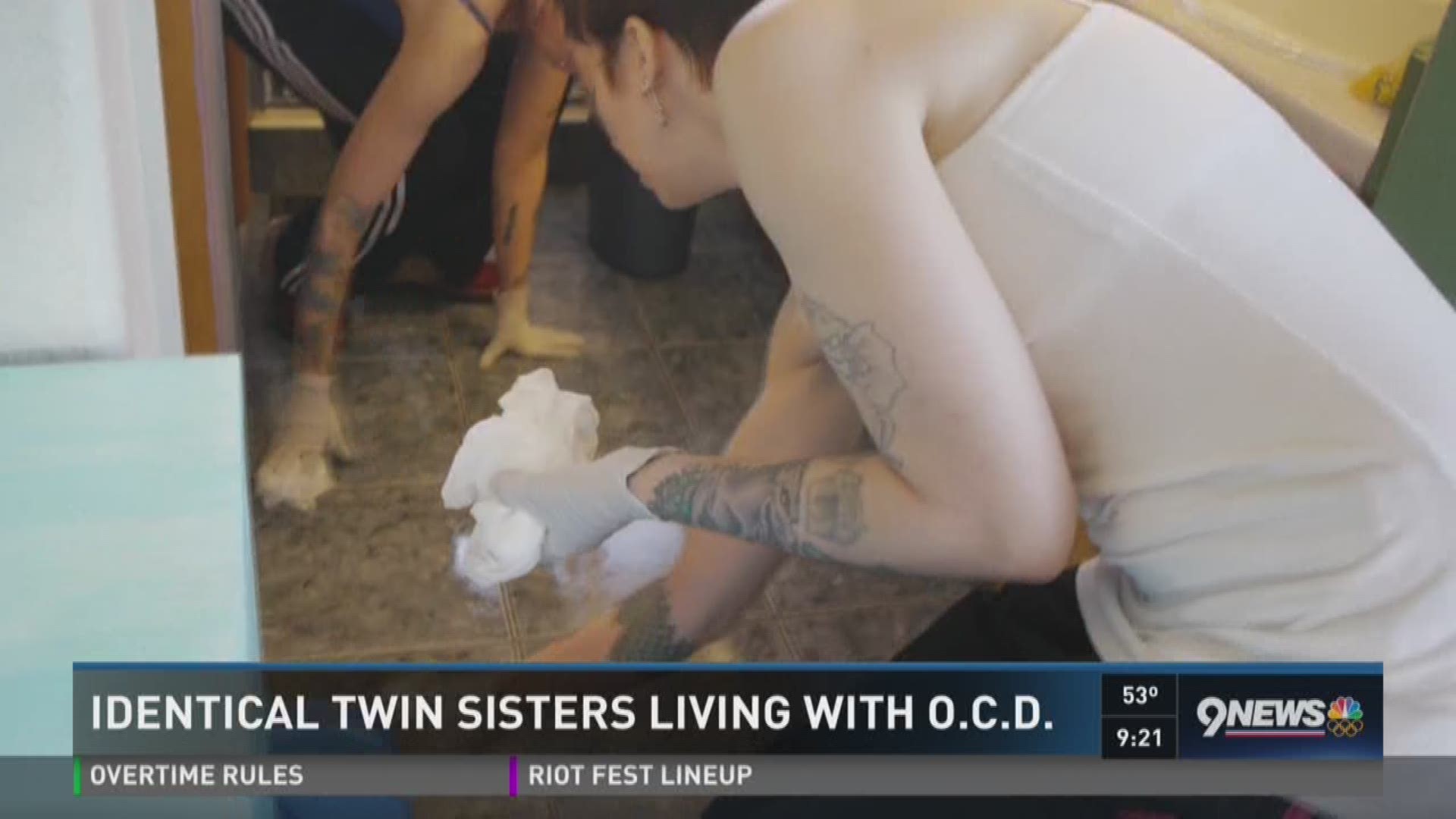 Two 31-year-old Broomfield women finally have a shot at a fulfilling life for the first time in three decades, thanks to an old procedure which has a new purpose.

"It's the first time in my life I can look at my anxiety and be like 'Wait a minute, this is a ridiculous thing to be doing,'" Amanda Eldritch said.

Their obsessions over germs and contamination as well as their compulsions to clean their home and themselves will never go away. However, because of the circuitry that can interrupt signals in their brains following the DBS procedure, those obsessions and compulsions are not as intense.

How bad was it for these two?

"We had a serious rubbing alcohol problem," Sara said. "We could go through five bottles a day, each, and that was on our skin."

How much rubbing alcohol the twins would go through (CREDIT:&nbsp;Littleton Adventist Hospital/Crossbow Films)

"There was one point when we were using so much hydrogen peroxide on our faces that it turned our eyebrows orange," Amanda said.

The sisters would also take showers which lasted for 10 hours. The water would turn freezing cold.

Despite it being very painful, their mental disease would not let up. Their thoughts told them they, everyone and everything around them was filthy.

The DBS has alleviated some of that anxiety, but there are still many more phobias, like public bathrooms.

When the sisters have to leave the house for an appointment, they stop eating and drinking in advance to the point they become dehydrated. They do this so they don’t have to go into a public restroom.

Sara and Amanda also wear gloves, a lot. They wear them for cleaning, doing laundry and also for cooking. They make all of their own food to avoid having someone else prepare meals for them. Their fruits and vegetables are rinsed in scalding hot water to make sure they're are clean.

"Blueberries change color because they've been rinsed for so long under hot water," Sara said. "We cook our food pretty much by rinsing it."

This is all very heartbreaking for their mother, Kathy Worland, to watch. She has paid for medications and fees for treatments and, of course, she grocery shops a lot.

"At the grocery store, I'd have cases of rubbing alcohol and five to six boxes of gloves, and then, I'd get a lot of disinfectant wipes,” their mother Kathy Worland said. “I'd have $200 in my cart for just these three things and that was sometimes twice a week. And then, there were all the bottles of shampoos, conditioners and soaps."

Worland had no choice but to purchase these things for her daughters. If they couldn't clean, she feared what they might do. The sisters admit they had considered suicide ever since they were 13.

Nowadays, a sense of hope is returning to the family.

In February 2015, Amanda and Sara became the first two people in Colorado to have deep brain stimulation as a treatment for their OCD.

The twins in the hospital for their treatment (CREDIT:&nbsp;Littleton Adventist Hospital/Crossbow Films)

Over the last year, life has improved.

"It's the difference between doing nothing and doing something," Sara said.

It was through online research Sara and Amanda found neurosurgeon Dr. David VanSickle at Littleton Adventist Hospital. Dr. VanSickle preforms deep brain stimulation to ease the tremors of Parkinson's patients and to help those who suffer from dystonia, a movement disorder.

Dr. VanSickle is one of a few doctors in the country who performs the procedure while patients are asleep. That appealed to Sara and Amanda who feared the anxiety that might come on if they were awake in the operating room.

When Dr. VanSickle first met the Eldritch sisters, deep brain stimulation had never been done in Colorado to relieve the symptoms of OCD. It was not something insurance carriers would approve although the procedure is readily covered for Parkinson's and dystonia cases.

"I had two women in my office, sitting in front of me, and their mom who was so worried about what would happen when she's gone," Dr. VanSickle said. "I thought 'If I don't help them, nobody else will help them. They're likely going to die.'"

Sara and Amanda spent two years going through the protocol necessary for DBS. Meanwhile, Dr. VanSickle went through three rounds of battles with their insurance company before coverage for the procedure was approved.

DBS involves putting an electrode in the patient's brain. The wiring goes down the back of the neck to two neurostimulators on either side of the chest.

For Sara and Amanda, their regular doctor can electronically control the impulses from the neurotransmitter to, for example, block signals that would boost their anxiety.

"If you don't have that anxiety push to always force you to do the habits, then the habits are relatively easy to retrain," Dr. VanSickle said.

Amanda and Sara say they now feel equipped with the tools needed to reason through some of their anxieties and phobias.

They are thrilled to be off all psychiatric medication. They refer to their old medications as "Band Aids" because they didn't do anything to fix their condition. It only dampened their moods and made them feel numb.

They are now taking part in weekly cognitive therapy. Before DBS, talking about what they were going through was impossible because they were unable to reason through their obsessions and compulsions.

Sara and Amanda also work on modifying their behaviors at home. They make a trip out of the house every day to challenge themselves.

For our interview, Sara and Amanda came to the 9NEWS studios. They were guarded but friendly and comfortable in the studio. In hindsight, their biggest anxiety was having a microphone attached to their clothing.

In an almost simultaneous maneuver, the sisters dropped their microphones on the floor. They picked them up and then told photojournalist Adam Vance they could put them on. That was part of their therapy: drop something on the floor where it could get dirty, pick it up and hold it.

Sara and Amanda could never have done something like that before the deep brain stimulation.

They are among the estimated 3.3 million adults in the U.S. who have OCD. Like in their case, the mental disease appears in early childhood.

When Sara and Amanda were little girls, the OCD presented itself first as hypochondriasis and scrupulousity.

"Hypochondriasis has to do with medical fears," Sara said. "We would think we were poisoned. We would pick through our food to make sure it was OK."

"Scrupulousity is religious OCD, a constant fear of going to hell," Amanda said.

The twins battled those conditions but still managed to get good grades in school. When they hit puberty and started high school, things went downhill fast.

They became disgusted by their bodies and the bodies of everyone around them. Thoughts of contamination would take over their thoughts.

"I can look back at my childhood, and I actually wore swimsuits, shorts, used public bathrooms," Sara said. "All that is gone, dead."

Despite their absences during high school, Sara and Amanda got good enough grades that they graduated from high school. They tried to take community college classes, but the anxiety was too much to bear.

"There is a correlation between OCD and intelligence," Dr. VanSickle said. "These women are actually of higher intelligence which kind of makes their disability worse. They know they don't want this, and they can't get rid of it."

Dr. VanSickle says he currently has a handful of OCD patients who are currently going through the FDA ordered protocol while he is working with their insurance carriers.

"I hope that Amanda and Sara have set a precedent," Worland said. "I hope that Dr. VanSickle has set a percent to say 'Yes, this helps. This works.'"

The strides they have made are profound. Showers are down to a half hour. They only use rubbing alcohol to clean surfaces in their bathroom. They can shake hands with people.

"We are currently surviving and striving for thriving," Amanda said.

"I've heard laughter from them which I haven't heard for years," Worland said. "Even though they do have a debilitating depression at times, I've seen joy."

The twins don't look a year, five years, 10 years down the road. They are taking one day at a time, confronting their anxieties head on.

"We're trying to feel like useful members of society," Sara said. "I want to be someone who could ever have a job, have their own home, friends, a social life."