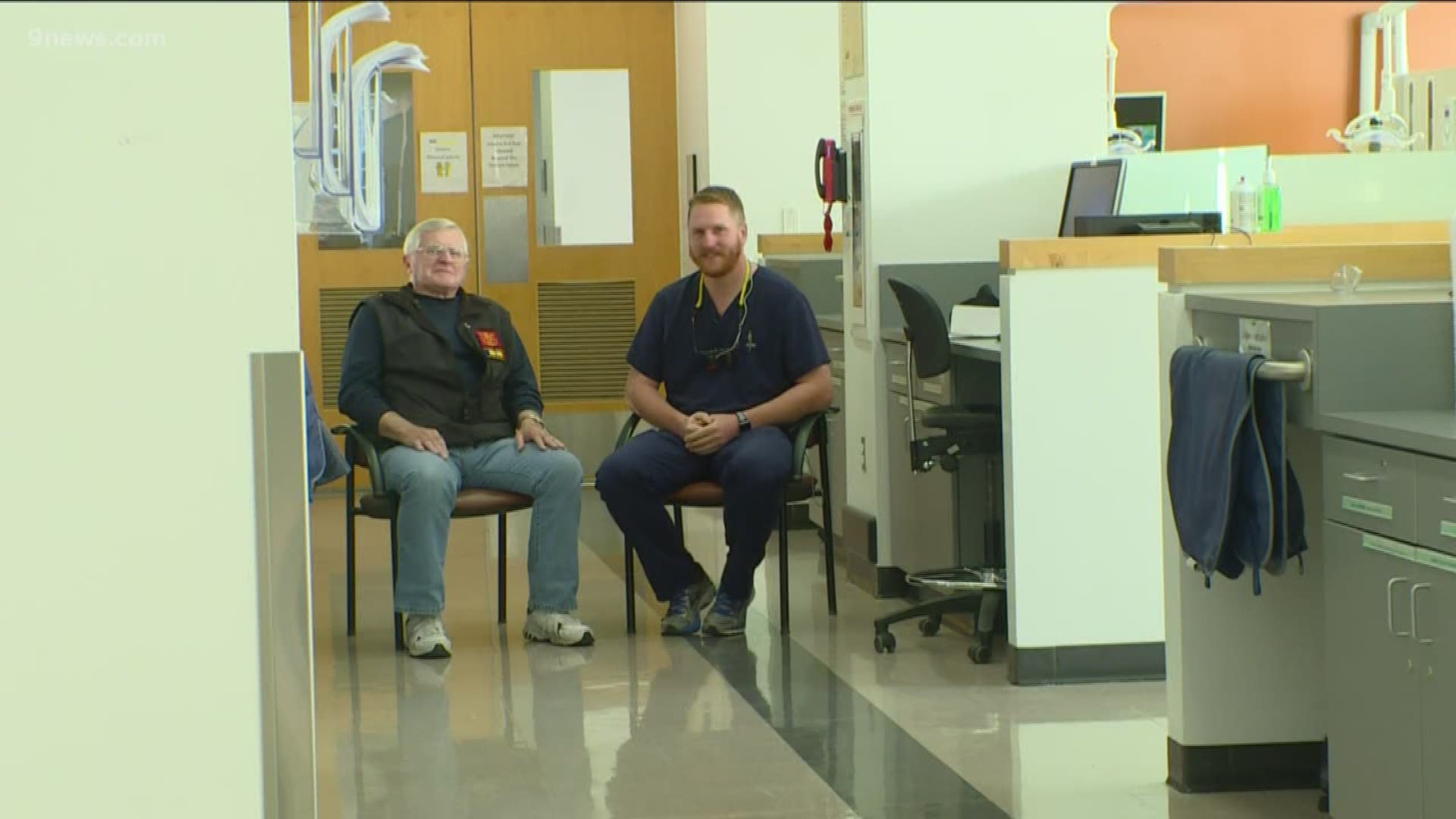 AURORA, Colo. — John Berdeaux had resigned himself to not chewing or smiling properly.

His mouth was a mess, and as one tooth decayed in the front, he said he pulled it out himself.

His molars were gone, and he said he ate lettuce "like a rabbit."

"My teeth hurt," said Berdeaux, 75. "I needed a lot of work and couldn’t afford to have it done."

Several decades ago, Berdeaux said he was climbing the corporate ladder, on his way to making good money, but a disease that had been lurking since he came home from Vietnam couldn't hide.

“It took about ten years for the PTSD to hit me with a 2-by-4," he said. "That put me down for a while. That was a hard time. And after that I’d no other way to say it, God and I got together real close and life changed.”

Berdeaux has spent the last 40 years in ministry. It's a job he believes in, but not one that pays well.

And then a few months ago, he heard about a place called the Heroes Clinic.

"It was like, 'wow, could this be? Could I get some teeth where I could actually eat like everybody else?'" he said. "Or where my flipper won’t fall out talking to somebody?"

As a decorated Vietnam veteran on a fixed income, Berdeaux qualified to get discounted care from the dental students at the CU School of Dental Medicine through its Heroes Clinic on the Anschutz Medical Campus.

It was still difficult for him to go to his appointment because of traumatic experiences in the past -- Berdeaux said his uncle used a drill in his mouth when he was a kid without anesthesia.

"When he was white-knuckling the chair at our first appointment, I told him I would be doing the same thing," said Karl Hellwig, a fourth-year dental student.

But Berdeaux relaxed when he learned the two had something in common.

“And then I found out he was in the military," Berdeaux said. "There’s an immediate bond between anyone that serves. It doesn’t matter where, what unit you are. There’s a bond that’s just there. That provided a trust that he didn’t have to earn it was just there."

Hellwig is a second lieutenant in the Air Force and will be a dentist in the military after he graduates next spring.

He said he spends as much time as he can volunteering in the Heroes Clinic because of people like Berdeaux.

Over the last three months, he's given Berdeaux molars to chew, and they'll be working on the aesthetics of his smile going forward.

“The United States has got to know about this and it has to be duplicated everywhere it possibly can," Berdeaux said.

The clinic is funded by Delta Dental, and it said it's the only one of its kind in the country.

Berdeaux knows he's not the only veteran who needs the help.

“If I won the lottery, part of those winnings right off the top there would be a million dollars going to the Heroes Clinic only to spend enough time to find out how much more I could give to it," he said. "That’s how much I’m impressed by what they do."