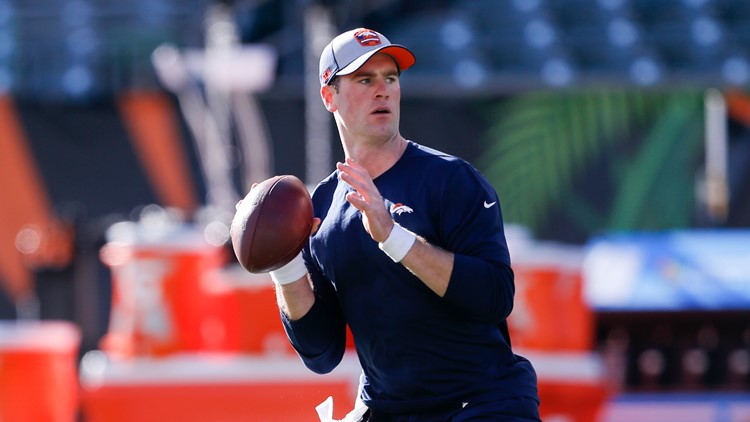 Hogan returns for chance as Broncos No. 2 quarterback

KUSA – It may have been no more than a one-year contract for about $1 million, give or take, but it wasn’t the only offer Kevin Hogan received to become a backup quarterback.

Given his options, Hogan decided to return to the Broncos and compete for the role as Joe Flacco’s understudy.

“There’s always a competition," Hogan said Thursday in a phone interview with 9News. “Nothing’s ever promised, but it’s something I wanted to do. I wanted to be back here in Denver to grow as a player and I like the way things are heading. I wanted to come back."

The Broncos showed a leap of faith in believing Hogan can be their No. 2 QB in 2019, because he didn’t play a snap in 2018. He was claimed off waivers from Washington last September and took Paxton Lynch’s place on the Broncos’ 53-man roster to start the season.

Before that, Hogan starred at Stanford, then endured physical and mental punishment while grinding through eight games over two seasons for the then-pitiful Cleveland Browns. He then played very well last preseason for Washington before the Broncos nabbed him off waivers to replace Lynch, who was a first-round draft pick just two years earlier.

Hogan, 26, was non-tendered as a restricted free agent in lieu of a $2.025 million salary last week, but he agreed on a smaller pay out Thursday to return – knowing the team is certain to select a quarterback at some point in the draft next month.

“I loved the way coach (Rich) Scangarello and coach (T.C.) McCartney developed quarterbacks out in San Fran and I’m excited to work under them," Hogan said about his new offensive coordinator and quarterbacks coach. “Excited to be part of our QB room with Joe and Garrett (Grayson) and get back to work."

Hogan was all in as Case Keenum’s backup last year and he’ll do the same this year now that the Broncos have replaced Keenum with Flacco.

“I think he’s an unbelievable talent," Hogan said of Flacco. “One of the best natural throwers in the NFL. Someone I’ve really watched over the years. He’s had a lot of success and I’m excited to be in the same room as him and help him any way I can to get ready for Sundays."