A 35-page report by an independent investigator concludes that "more likely than not" the woman accusing Rep. Steve Lebsock (D-Thornton) of sexual harassment told the truth. 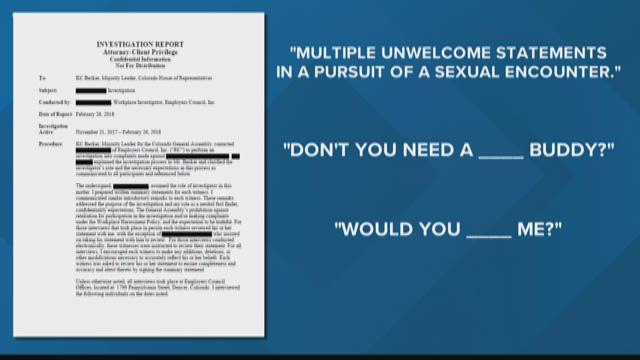 Inside an Irish bar in downtown Denver, Rep. Steve Lebsock (R-Thornton) allegedly told a legislative aide that her “breasts looked great in that dress.”

It’s one of 11 claims of sexual harassment made by five women against the Thornton Democrat. The lewd and often profanity-laced claims are detailed in a 35-page report prepared by a workplace investigation company called Employers Council.

Lebsock vehemently denies any wrongdoing, but the investigator didn’t believe him.

He or she concluded that in all 11 situations it was “more likely than not” that the events happened as the women described them.

First, it’s up to Lebsock’s 64 colleagues in the Colorado House of Representatives to decide whether he deserves to lose his job.

They are scheduled to vote Friday on whether to expel him from office. To do that, 44 representatives (two-thirds of the body) will have to vote yes.

Lawmakers told reporters Wednesday that the redactions in the report they’ve been allowed to review make it difficult to follow.

“I think it’s unfair for our members to even make a decision based on the redacted report because you can’t read the report and actually logically understand it when even the investigator’s name had been redacted,” Rep. Patrick Neville (R-Castle Rock) said.

House Majority Leader KC Becker (D-Boulder) is working to get a less redacted version of the report to lawmakers before Friday’s vote. She acknowledged in an interview with reporters Wednesday that the redactions make the report hard to follow in places.

However, Becker wants to balance those concerns against protecting the privacy of the women who don’t want to go public with their accusations.

Rep. Faith Winter (D-Westminster) is particularly sympathetic to that concern. She’s one of Lebsock’s accusers.

“It’s awful to have people tweet about your sex life with your husband,” Winter said.

She told reporters that, in her opinion, the findings of the investigator should be enough to for members to vote.

“If this does not pass, this building is sending a very strong message that women’s voices are not valued,” Winter said “They are not believed. This building doesn’t care about what type of workplace they are creating.”

9NEWS received a copy of the redacted report from Cassie Tanner, one of Lebsock’s accusers, who has come forward publicly.

Below is the case against Lebsock ahead of Friday’s vote. It contains explicit references to sex and profane language.

The first three claims in the report center around one night at Stoney’s Bar and Grille. It was a party celebrating the end of the 2016 legislative session.

Winter claimed that a little after midnight Lebsock suggested that her husband would be excited to see more of her now that the session was over. She told him he was out of town, and that’s when he asked her to come home with him.

She claimed he told her, “If you came with me right now I could make you happy and do things to you that your husband wouldn’t.”

She said she told him no, but he kept pestering her.

“Throughout the interaction [he] was getting angrier. He was standing very close to me; I could feel his breath on my face as he spoke,” Winter told the investigator. “His face was red and his voice was deep and forceful with me. He wasn’t shouting but he was firm.”

She told him to go home.

He then allegedly tried to grab her left elbow. She backed away causing him to lose his balance, stumble into her and allegedly touch her lower back/upper buttocks area.

No one heard their conversation that night, but two unidentified witnesses corroborated part of Winter’s story.

One of them said he or she saw Winter “recoil from something” Lebsock said with a “wide-eyed, shocked expression on her face and she looked around for assistance.”

Lebsock denied all of it.

He told the investigator he never said those things to Winter, and he certainly never touched her. He offered a lie detector test he took late last year as proof of that.

The investigator dismissed the lie detector test for several reasons, including that they’re not admissible in court, that this particular company reached out to Lebsock after the allegations broke and that he got to choose the questions he would be asked ahead of time.

Lebsock has repeatedly accused Winter of changing her story when it comes to the part about grabbing her butt. He claims she initially said it was intentional and then changed it to accidental.

In the report, Winter told the investigator she didn’t know whether it was intentional or not, but she did walk over to other lawmakers at the bar that night and tell them she couldn’t believe Lebsock grabbed her butt.

She told him no.

“I don’t think I told anyone at the time,” she told the investigator. “I didn’t have anyone that I trusted enough to tell … [Lebsock] was the one paying me and truthfully, this kind of this has happened to me before.”

“It doesn’t surprise me that other people are making false allegations against me,” Lebsock told the investigator. “Other than this situation is spiraling out of control I am not sure why she would say that. There is a small group of people that want to take me down.”

Again, the investigator sided with the woman saying Lebsock couldn’t provide a reason why the woman would fabricate this event.

This woman alleged that while meeting with Lebsock he said, “would you f*** me?”

She told the investigator she tried to make a joke about it, but he told her he was serious and “he was asking me to have sex with him.”

Lebsock said he was never alone with this woman, and she made up the whole conversation.

The unidentified woman is a witness to another accuser’s claims, and Lebsock alleged that might be why she lied about this conversation.

One of the incidents happened at a Colorado Young Democrats party in 2014. She told the investigator that Lebsock told her she looked good in her dress while staring at her breasts.

“I tried to laugh it off,” Tanner said. “He said, ‘No, your breasts look great in that dress.’”

An unidentified witness corroborated Tanner’s account, but he or she told the investigator Lebsock leaned in and said, “Your tits look really good in that dress.”

The second incident happened about a year later at 1Up Bar. Tanner alleged that Lebsock walked over to her and unbuttoned the top button on her blouse and said, “that’s better.” She slapped his hand away and alleged that he then laughed in response.

Lebsock told the investigator that his ex-wife could prove he wasn’t at 1Up bar that night. He said she was tracking his comings and goings at that time because they were divorcing and her calendar shows that he was at home that night.

The investigator questioned whether the calendar had been altered since he or she wasn’t provided with the original.

Claims eight, nine and 10 center around three interactions between Lebsock and another unidentified woman.

In one instance, the woman alleged that Lebsock floated the idea of having sex while the two were having lunch at a Mexican restaurant.

She told him that sex was off the table, and he allegedly responded by saying, “It doesn’t have to be on the table.”

Lebsock admitted to joking with this woman about having sex, but he said that happened after she admitted to him that she was having an affair and that her husband couldn’t satisfy her in bed.

He told the investigator he made a joke about the two of them giving it a try.

“This investigator does not doubt that to him, in his opinion, this conversation was consensual,” according to the report. “This does not appear to be the case for [name redacted].”