710KNUS producer Kirk Widlund denied any connection to neo-Nazi social media posts that have been attributed to him. 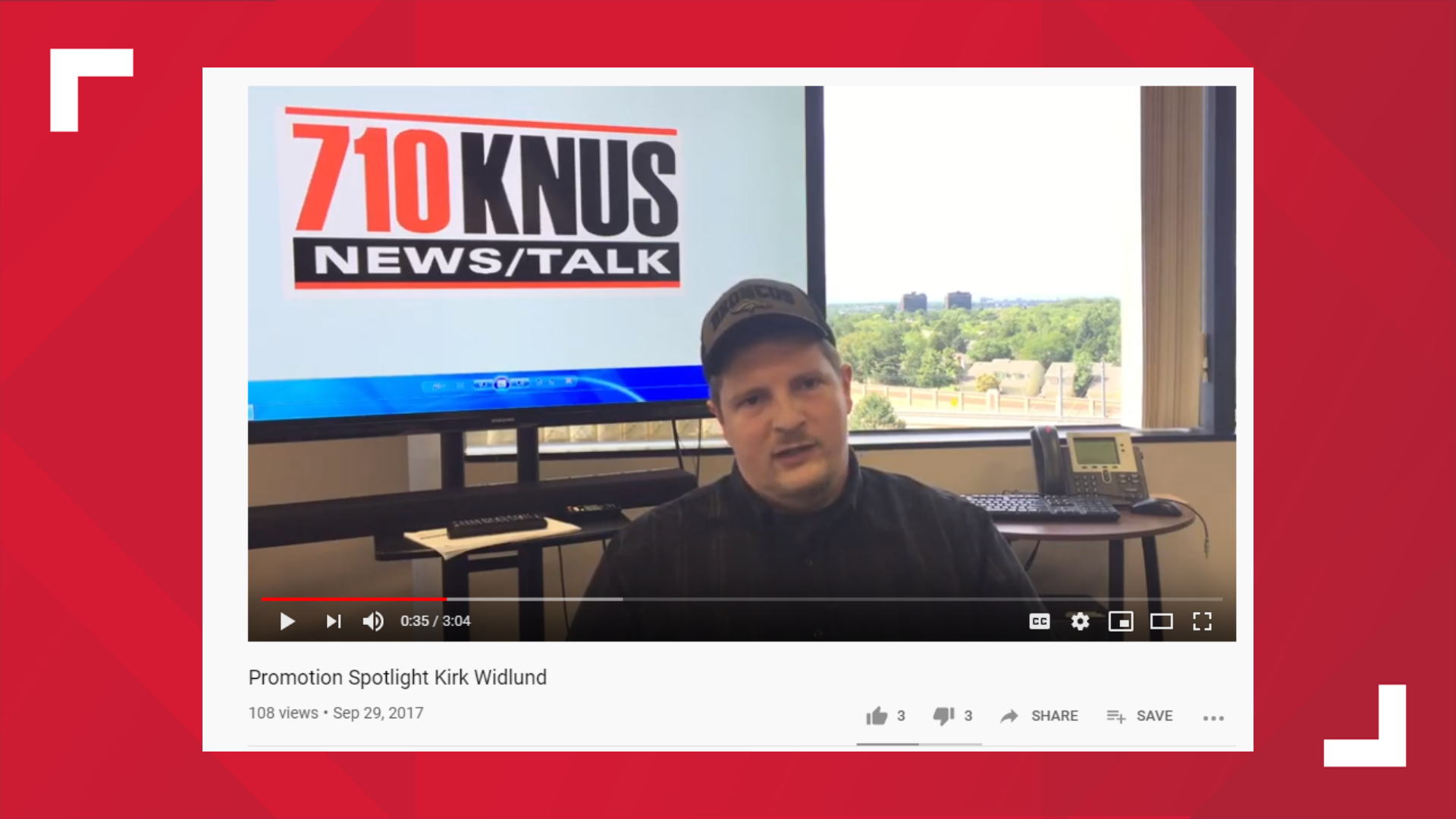 DENVER — A local radio producer for conservative talk radio station 710KNUS said years worth of neo-Nazi social media posts attributed to him are an elaborate hoax by the leftist group Antifa.

Kirk Widlund is the executive producer of The Steffan Tubbs Show and The American Veteran Show. He also hosts the 710KNUS podcast Keeping America Great.

KNUS management declined to comment on the allegations. Widlund denied any connection to the account but would not discuss why his language on 710KNUS mirrored the social media account in April.

The Colorado Springs Antifa group, which is known for outing and doxing people it says are fascists and racists, posted what it claims is an extensive archive of a VK.com profile belonging to ---Kirk-- Widlund. VK.com is an alternative social media site to Facebook based in Russia often used by people who have been banned for inflammatory and racist postings on other social media platforms.

When reached by phone, Widlund initially said no comment, but when pressed on the VK profile he said, “Yeah, it’s not true. It’s not me.”

A posting from the profile on April 14, 2019 closely matches what Widlund said on air, the following day.

Credit: Courtesy VK.com
A screengrab of the VK.com post attributed to Kirk Widlund.

Twitter, the last ZOG (Zionist-Occupied Government) platform that I was allowed to be on, finally ax’d my account for calling out a Jewess who was pushing fake news.

So, no more tweeting for me.”

On April 15, Widlund had the following conversation with on-air host Steffen Tubbs about his Twitter account getting “axed:"

Tubbs: What did you text me?

Widlund then describes how his account was axed for calling out a “verified liberal” for pushing “fake news.”

Widlund: So I call her out for her fake news, right?

Tubbs: Did she report you?

Widlund: She reported me.

“Watch your allegations, fool,” Tubbs wrote. “There is an internal investigation going on and so far has found no truth to your fake, doctored documents.”

“A libel suit may be in your future,” Tubbs tweeted to Colorado Springs Antifa. “We know who you are.”

Tubbs declined to comment to 9NEWS, citing a pending “internal investigation” at 710KNUS.

Widlund claimed he is being harassed by Antifa.

“Yes, Antifa doxed me. Went to my home, dropped off fliers. Put my home address on fliers and have been trying to intimidate and threaten me since," he said.

When asked again to answer to the VK posting closing matching what he said on the radio, Widlund ended the conversation with, “Uh..no comment to that.”

Widlund, who is often heard on-air during Tubbs’ show, was not on-air Wednesday.

Tubbs said Widlund was taking “much-needed” and “well-deserved” vacation time and would return to the air Friday.

Tubbs repeatedly alluded to the situation on Wednesday’s broadcast, saying “I’ve got to talk in code.”

He disavowed support for neo-Nazis and repeatedly criticized Antifa, talking about “bad people” who should be “socked in the mouth.”

Amid the neo-Nazi allegation, the co-host of a conservative Facebook podcast run by a local Proud Boy announced the show is moving to KNUS.

The Proud Boys have been classified as a hate-group by the Southern Poverty Law Center and by the local Anti-Defamation League.

On December 9, co-host “Liberty Logan” announced on Facebook, “Major League Liberty is going to its own website, we will be on the radio, not too long, on KNUS so be ready for that.”

Liberty Logan is a host with Colorado Proud Boy Louie Huey who told 9NEWS in a story last month his club is not a hate group.

710KNUS host Peter Boyles has a history of featuring guests from VDARE, another organization classified as a hate-group by the Southern Poverty Law Center.

VDARE’s website features articles including “Baylor Football’s Black Rape Culture,” “Saboteurs Even In The Border Patrol–Are They Hispanic?” and “Do We Need More Hispanics?”

The article questioning the “need” for more Hispanics argued that America does not, because “Hispanics who manage to stay in school do as poorly as blacks.”