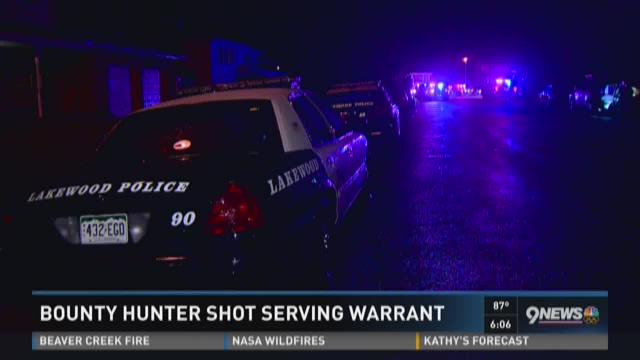 It’s unclear who shot the bondsman, as there were several of people at the house trying to take 23-year-old Jamie Rauhut into custody.

Rauhut was also injured in the shooting.

1 / 4
Lakewood police say a bail bondsman was shot while trying to arrest a wanted man.

Both he and the bondsman were transported to a hospital with injuries.

The incident happened in the 2400 block of South Hoyt Court in Lakewood at 9:09 p.m. Thursday.

Lakewood Police say about half a dozen bondsmen were at the location. They were attempting to serve a felony warrant.

Police say it’s a complicated investigation and will take time to determine exactly how many people were there and who shot who. Police say several shots were exchanged by the bondsmen and the suspect, making it unclear who caused the injuries at this time.

9Wants To Know did a background check on Rauhut.

He has a substantial criminal history in the metro area, with multiple arrests.

Lakewood Police issued him a summons for drug paraphernalia in the past and have arrested him twice on warrants out of other jurisdictions -- once for a probation violation and a second time for trespassing and resisting arrest.

Lakewood Police say in October of 2015, Rauhut was stopped for a fictitious/altered temporary license plate and they found a glass pipe with white residue in it.

Rauhut was convicted for driving under the influence when he was 19. Among multiple other charges, Rauhut has also been arrested for having a weapon, which he can’t have because of a felony conviction.

He’s not been charged in the Thursday night incident.

9Wants To Know is following the story and will have updates as they become available.