DNA evidence is expected to be at the core of case against Alex Christopher Ewing. Ewing is also accused of murdering three members of the Bennett family in Aurora. 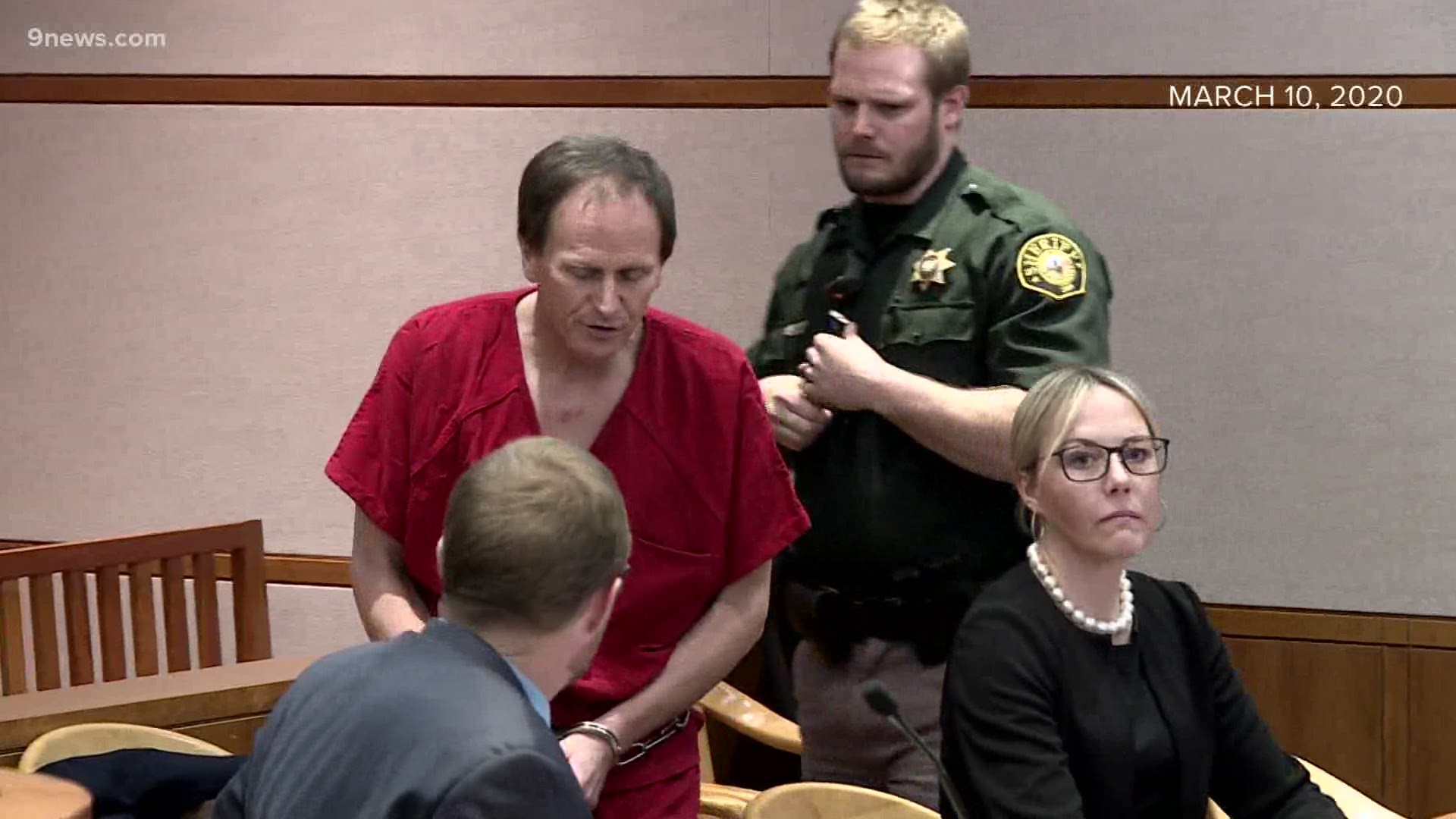 GOLDEN, Colo. — More than 36 years after Chery Lettin flicked on a light switch and discovered her mother’s lifeless body, she sat in a courtroom Monday afternoon and listened as a judge ordered the man suspected of the murder to go on trial.

Alex Christopher Ewing will face four separate counts of first-degree murder in the Jan. 10, 1984, attack on Patricia Smith, a 50-year-old interior decorator who was raped and beaten to death with a hammer in the Lakewood townhome she shared with her daughter and grandchildren.

That determination came at the end of a day-long hearing in a nearly empty Jefferson County courtroom where everyone was ordered to wear a mask and Ewing himself was also fitted with latex gloves, his wrists shackled to a chain wrapped around his waist.

“The court has to draw all reasonable inferences in favor of the prosecution, and that’s what I’m doing here,” Judge Tamara Russell ruled from the bench. “I find that on all charges the people have shown probable cause that the defendant, Mr. Ewing, committed all the crimes.”

No trial date has been set.

A DNA hit in July 2018 led to the identification of Ewing as a suspect in Smith’s murder – and the slayings of three members of an Aurora family that occurred six days later.

The two cases were cold for more than three decades before that DNA hit two years ago led investigators in Lakewood and Aurora to a prison in Nevada, where Ewing was serving a sentence for an ax-handle attack on a Henderson couple.

The Aurora case – which involves the murder of Bruce and Debra Bennett and their 7-year-old daughter, Melissa – is proceeding simultaneously. Ewing faces additional murder charges in the Bennett case.

An interested spectator at the hearing was Connie Bennett – Bruce Bennett’s mother.

But that case was mentioned only in passing. The focus of this preliminary hearing – where prosecutors had to show enough evidence to convince the judge the case should go to trial – was devoted to the murder of Smith, a case that generated far less publicity over the years.

It’s a case that ultimately is expected to hinge on DNA – each side characterized the evidence from a very different perspective.

Prosecutors argued that DNA found at the crime scene – on Smith’s body, on carpeting from the spot where she was killed, and on a children’s blanket that covered her head when she was found – amounted to overwhelming evidence that Ewing should face a jury.

Prosecutor Robert Weiner said the analysis of those multiple DNA samples and the statistical probability that the genetic material could match someone else go “well beyond probable cause – in fact, they’re astronomical.”

Defense attorneys made it clear that down the road they would challenge the accuracy of those test results.

Attorney Katherine Spengler suggested that evidence had been contaminated, that there had been a mixup of evidence in the Smith and Bennett cases, and that the defense was still examining lab reports and had not yet been able to do any of its own testing.

“There is very little physical evidence” tying Ewing to the murder, she said.

The hearing began with the defense arguing that the hearing should be delayed. Defense attorney Stephen McCrohan said that because of the COVID-19 pandemic, he and Spengler were not able to meet with Ewing to adequately prepare. He also contended that because of restrictions at the Jefferson County courthouse – social distancing rules were in effect – the courtroom was not “truly open” to the public

He asked for a delay of unspecified length.

Weiner, the prosecutor, opposed the delay.

“I would point out that it wasn’t Patricia Smith’s choice to be murdered 36½ years ago,” Weiner said. “This is outrageous.”

Lettin took her seat, no more than a dozen feet from Ewing.

She described the late afternoon of Jan. 10, 1984. Her mother wasn’t at a bus stop as expected to pick her up after work.

“My mother was always very punctual,” Lettin testified. “She would have never not been there. Never.”

Letting called a cousin, and together they went to pick up her two young children from day care. Then they drove to the family’s townhome on West Bayaud Avenue.

The sun had already set. The garage door was open, and all the lights in the house were off – only the flicker of a television in her mother’s upstairs bedroom could be seen, Lettin testified.

She stepped into the house and turned on a light – finding her mother’s body on the living room floor, her head covered by a Winnie the Pooh blanket.

Lettin ran to a neighbor, who confirmed her belief that her mother was dead and called police.

At one point, Weiner asked Letting to turn toward Ewing – and to say whether he was anyone she knew.

Then the prosecutor asked her if Ewing had permission to be in her home?

The only other witness called was Lakewood police Det. Clayton Fuller, who was assigned the case in 2018 after the DNA match was made.

Fuller walked prosecutors through the many years of the investigation, beginning with the response the first day and covering major points the ensuing decades, including the determination in 2010 that DNA from the Smith murder scene matched DNA recovered inside the Bennett home.

He also detailed the awful injuries Smith suffered – 17 blows to the head from an auto-body hammer.

On cross-examination, Spengler got Fuller to acknowledge that no witness had identified Ewing as a suspect in 1984 and that there was no evidence he ever tried to pawn or sell Smith’s wedding ring and a cocktail ring that were apparently taken after she was killed.

“So, what this investigation really came down to – at least from your perspective, or law enforcement’s perspective – is physical evidence, right?” Spengler asked.

Spengler then asked him a series of questions that raised issues about the state of the physical evidence. Those including the fact some investigators in 1984 didn’t wear gloves while handling items and that there was apparently a mixup of a piece of evidence from the Bennett case that was sent to a university laboratory in Texas for testing and then inadvertently returned to Lakewood with evidence from the Smith case.

Those issues, however, were left to be litigated another day after Russell ruled that there was probable cause to believe that Ewing raped and killed Smith.

Ewing is due back in court in Jefferson County on Sept. 1 for arraignment. It is also expected that Judge Russell will consider a number of motions in the case and determine whether Ewing is eligible for bail.

In the meantime, Ewing also faces the second part of his preliminary hearing in the Bennett murders. That is scheduled July 28 in Arapahoe County.