9Wants to Know found the scientist that has studied the aquifer since 2009 – she is worried pulling water during a drought could lead to its destruction. 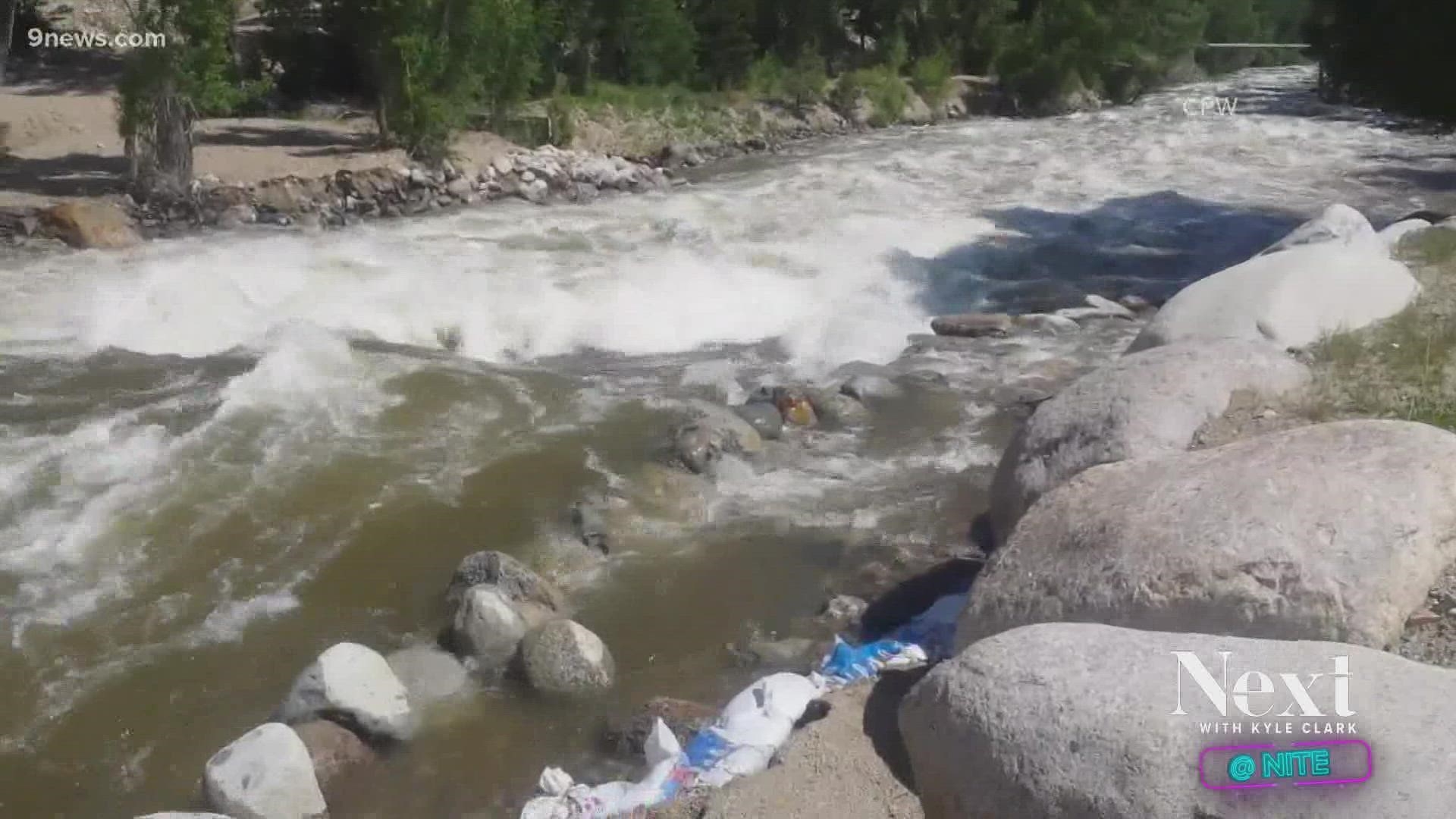 CHAFFEE COUNTY, Colo. — The Chaffee County Board of Commissioners voted Tuesday to approve the conditions under which a water bottling company could continue to pull water from a spring connected to the Arkansas River.

They are allowed to do so through the water right they bought back in 2010, but the county gives the green light if it finds the company follows all of the rules.

The 1041 permit process outlines specific conditions that BlueTriton has to meet in order to pull water out of Chaffee County. BlueTriton, previously known as Nestle, owns two wells. State water records obtained by 9Wants to Know show the company can pull up to 196 acre-feet of water each year.

Delia Malone, one of the original ecologists who analyzed the effect of pulling water from the aquifer, told 9Wants to Know that doing so during a drought would be disastrous. It could ruin the water source.

“When we draw down the aquifer, we draw down the life of the stream,” Malone said. "Yes, that spring that Nestle is proposing to use to make bottled water is only a small portion – but, in this changing climate when the warming climate is resulting in dramatic drought, every single drop of water that supplies that aquifer is important to maintaining stream flows.”

The worst point in the county was an “extreme drought” that happened periodically from 2019 to 2021.

Credit: National Integrated Drought Information System
An infographic showing the extent of drought in Chaffee County from 2009 to 2021. The darker the shading, the worse the drought. D3 is considered to be "extreme drought."

An infographic showing the extent of drought in Chaffee County from 2009 to 2021. The darker the shading, the worse the drought. D3 is considered to be "extreme drought."

Malone wrote in the draft report that pulling water from the wells in a drought could lead to “aquifer dewatering and related impacts to wetland habitat.”

Malone said regardless of the amount of water BlueTriton will take, Colorado is at the point where as much water as possible needs to stay in the river to keep fish, and the birds that feed on them, alive.

“When wildlife declines, we decline,” Malone said. “If our only reason for protecting wildlife is our own sustenance, then at least do that. Because we are 100 percent - there’s no way that we [can] survive without wildlife surviving.”

Malone said she “adamantly” stands by her report 11 years later and does not backtrack from her findings. They were not included in the final version for “political” reasons that she did not want to expand on.

For the most part, BlueTriton has been a good steward of the water. The county hired W.W. Wheeler and Associates to conduct an updated analysis in 2020 and said the company is not using as much water as it could be.

Gary B. Thompson, an engineer for the water engineering firm W.W. Wheeler and Associates, found the utilization of the wells was not causing problems.

“I conclude that operation [of] the NWNA wells has not caused progressive depletion of the groundwater resources of Chaffee County,” Thompson wrote.

Jennifer Davis, Chaffee County attorney, said in an email that Monroe’s report led to increased wetlands monitoring in the 2009 contract. Any 2021 contract would have similar measures that would allow the county to cancel the contract if there was evidence that the wetlands were being stressed.

“It is important to note that during the recent hearings, evidence was presented that the applicant has substantially complied with those plans over the past 10 years,” Davis wrote.   “...If [BlueTriton Brands] fails to comply with the plans, the permit can be suspended or terminated.”

In 2020, Wheeler found the nearby wetlands are healthy and the permit has “adequate” monitoring protocols.

The well permits allow for a maximum of 196 acre-feet per year. On average, the Wheeler report found the wells pulled in 111.7 acre-feet on average. The well had not been tapped for more than 100 acre-feet per year since 2014, according to the report. Any water taken for the water bottling operation is replaced with water from the nearby Turquoise Reservoir and Clear Creek Reservoir.

There were two instances of broken meters, but otherwise, there weren’t any infractions. Thompson, the report’s author, wrote the wells “appear to be fully in compliance.”

How much water goes to water bottles?

Kevin Rein, a state engineer and the director of the Colorado Division of Water Resources, said water bottling facilities use a small portion of the state’s water. He wrote in an email that one fairly standard-sized Colorado bottled water company found it was responsible for 0.0006% of the state’s annual water use.

For context – 85.2% of the state’s water goes to agriculture each year and 6.6% are used by cities and commercially according to data from the Colorado Division of Water Resources.

Rein said Colorado water law does not mandate how much water is kept in a well.

Malone said that even though BlueTriton does not have access to much water in the grand scheme of things, everything counts.

“But right now, we don’t have the luxury of being profligate with our water,” Malone said. “We need every single drop and we need every drop to stay in a spring and in an aquifer. And not be sucked out.”

Other requirements of the permit

Other requirements of the contract have mostly been met. Davis said in an email BlueTriton did not finalize a conservation easement, but that commissioners did not penalize the company because deadlines were not clearly explained in the permit.

According to a letter from the Colorado Department of Natural Resources, Nestle did not begin discussions about donating land for an easement until 2019, 10 years after the original 1041 permit was issued by the Chaffee County Commissioners.

Davis also wrote that BlueTriton did not hire as many drivers from Chaffee County as BlueTriton pledged to, but was not enough to deny the permit.

BlueTriton will pay $1.2 million across 10 years to various causes like water sustainability, forest health and affordable housing. It will pay $430k in just the first year, then $92,500 each year afterward.

A representative for BlueTriton did not immediately return a request for comment.