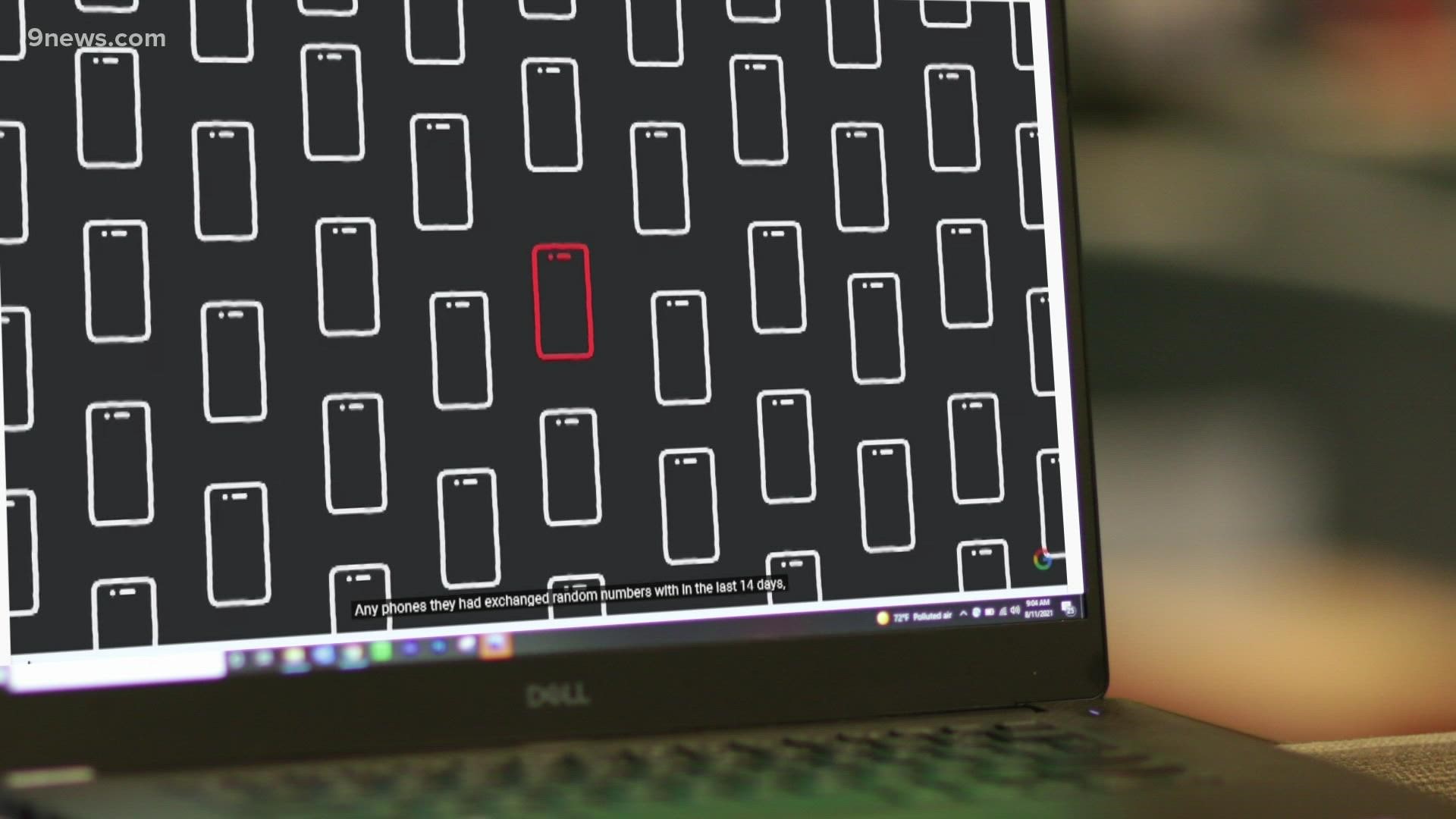 COLORADO, USA — The Colorado Department of Public Health and Environment (CDPHE) said in a Thursday news conference that Coloradans will now have another option to alert others that they may have been exposed to the coronavirus. Users can put their positive COVID-19 test result into the Colorado Exposure Application without needing a code from the state.

Casey Carlson, senior solution architect for the Office of Information and Technology, said Colorado is the first in the country to have this option.

“We received community feedback that this was a way to empower users to notify folks about their exposure more quickly and conveniently than through some of the other means in the system,” Carlson said.

Now, Coloradans are able to share results from tests done at home or a medical setting immediately.

Before, Coloradans that tested positive for the virus had to wait for a code to come from CDPHE before they could tell everyone they interacted with that they may have COVID-19. 9Wants to Know analyzed CDPHE data and found very few of those codes, 8% of all 382,216 codes distributed, actually made it into a phone leading up to this change.

The change in the code distribution process happened months after 9Wants to Know approached CDPHE with questions about the data analysis. A nameless CDPHE spokesperson sent 9NEWS an email in response to the story. After getting the alert, the spokesperson said more than 167,067 people viewed instructions on what to do next.

"It’s likely the impact was greater because many may have not visited the page but likely then followed our advice to quarantine and take other measures to protect themselves and others," the spokesperson said. "Following public health measures after you’re exposed saves lives and helps keep more Coloradans healthy."

Carlson said there are measures in place to prevent people from abusing the app and inputting false positives, including a “legally binding” agreement that the information provided is accurate. Someone may be able to get away with it once, but the way the verification process works stops repeat offenders.

“...If they try to do that again, there are actually controls within the national service for how those keys are anonymously maintained, which prevent a user from repeatedly trying to inaccurately activate an exposure notification,” Carlson said.

Issues getting a code

Rollins, a Castle Rock resident, reached out to CDPHE with problems getting a code in February 2021. When Rollins started to get headaches, a sore throat and pressure in her face - she became concerned.

“I started coming down with what I thought was a sinus infection,” Rollins said. “And then the day after, I found out I had COVID as well.”

She had been in contact with a lot of people while shopping at a grocery store and other outlets. Rollins knew about the Colorado Exposure App and wanted a code so she could let everyone know that they should quarantine. But she could not get one.

Rollins tested positive for the coronavirus on Feb. 1, 2021 according to medical records she shared with 9NEWS. Still without a code 10 days later, she reached out to CDPHE for help. A member of the team said she should get one “promptly” despite a wave of new cases.

“Unfortunately, because of the dramatic surge in COVID-19 cases, users have been experiencing a wait for their verification code as local case investigators and contact tracers work tirelessly to manage the overwhelming flood of new cases,” an unnamed member of the CO Exposure Notification team said in an email sent to 9NEWS.

Rollins said she never got the code and was frustrated by a process that used public health resources and did not function like it was supposed to.

“Everyone who could've taken preventative measures in a timely manner didn't because the system didn't work,” she wrote in an email back to CDPHE. “I am deleting my exposure notification app from my phone.”

It’s hard to know how long it usually takes for a code to get sent out. 9Wants to Know tried to review data on the amount of time it would take to get a code, but CDPHE said they don’t track it.

Rollins may not have gotten a code. But the CO Exposure Notification App did not work even among those who did get a code. 9Wants to Know found only 8% of the codes sent out were redeemed. That means people with positive COVID-19 cases did not tell those around them of a possible COVID-19 exposure more than 350,000 times from October 2020 to July 2021.

Scott Bookman, the COVID-19 incident commander at CDPHE, said the app was a success even with the low adoption rate.

“Even if that number is 8%, it's 8% more people than otherwise would have known,” Bookman said. “Every single notification is an opportunity to slow the spread of this virus. And so every time we notify somebody, and they isolate, they get a test, they have an opportunity to stop the chain of infection.”

Rollins disagreed with that assessment.

“It’s shocking,” she said. “I work in technology. And if my technology worked 8 percent of the time, I’m pretty sure what would happen to me….and my job.”

The nameless CDPHE spokesperson claimed the service sent "codes to every positive case with a phone number associated with it."

However, according to a comparison of CDPHE case data with the CO Exposure App data, a 9Wants to Know analysis found there were 87,374 COVID-19 cases that did not get a code.

How it’s supposed to work

The Colorado Exposure Application was designed to be an automated arm of the Colorado Department of Public Health and Environment’s contact tracing efforts. In theory, your phone would talk to those it came in contact with and ping you if you got too close to someone who had COVID-19.

Or, if you tested positive CDPHE would send you a code that you could input in order to let all of the friends, family and strangers that they may be infected and need to quarantine. Governor Jared Polis (D-CO) trumpeted the development and said it would “save lives.”

“Awareness and notification is how we will stop COVID,” Polis said in a YouTube video released in October 2020. “The notification compliments our testing and case investigation by alerting you if you’ve been exposed to the virus.”

The key would be the unique codes Coloradans were supposed to get after testing positive. 9Wants to Know found very few of those codes, 8% of all 382,216 codes distributed, actually made it into a phone.

The state publicly acknowledged early in the service’s use that it was not performing. Sarah Tuneberg led CDPHE’s efforts on the application’s rollout and implementation.

“We recognized very, very early that the system that we hoped was going to work, wasn’t,” Tuneberg said “And we began working on a whole new technology solution to automate that,” Tuneberg said in a November 2020 news conference.

Tuneberg, who no longer works for CDPHE, did not respond to requests for comment.

Bookman said the system changed because previously if you were exposed to COVID-19, you had to have a conversation with a contact tracer who would give them the code. That system was “slower than we wanted it to be,” so they changed tactics to automate code distribution. Now, the codes are texted to the phone number on-record, but Bookman said codes could be going to landlines or wrong numbers.

He said the app was part of a multi-prong approach to stop COVID from spreading alongside washing hands, wearing masks and staying home.

“We've talked about the Swiss cheese model, not everything covers each hole,” Bookman said. “But as you layer things on top of it, it really starts to prevent that spread.”

The price of 8% efficiency

This 8% performance is even after the state paid nearly a million dollars to market and maintain the app.

The state received the application for free through a partnership with the Association of Public Health Laboratories, according to the service agreement obtained by 9Wants to Know.

Provided "at no cost to client" according to page 12 of the contract between APHL and CDPHE obtained by 9Wants to Know through a CORA.

The cost came in the maintenance and the marketing. According to an email from CDPHE, the agency spent $750,000 on marketing to get the word out about the service. 9Wants to Know found in employee salary data obtained through open records requests that at least another $125,372.15 was spent on the salaries for five state employees to work on it for at least 2,139 hours.

Brian Spencer, a spokesperson with CDPHE, said in an email on Thursday that the money "for all expenditures" comes from "federal relief dollars"

Susie Welty, the deputy director of surveillance at the Institute of Global Health Sciences at the University of California, San Francisco, said the venture was worth it in the beginning of the pandemic. But now it’s time to shift all efforts from contact tracing to vaccination.

“I don't think anybody should be investing in contact tracing at this point in the epidemic when we have the vaccine,” Welty said. “I think one thing that could be done is pivot this application, because most of the cases are unvaccinated people, to push out vaccine information and access to vaccine appointments and things like that.”

Bookman emailed 9Wants to Know after the story was published to reiterate that they think the efforts put into the service are still worth it.

A 9Wants to Know analysis of state salary data found two employees were paid at least $8,334 each month the service is live. One employee works on the Colorado Exposure App full-time.

See the data for yourself: