9Wants to Know found the federal government is sending mixed messages by fining and paying the same Colorado nursing homes during the pandemic. 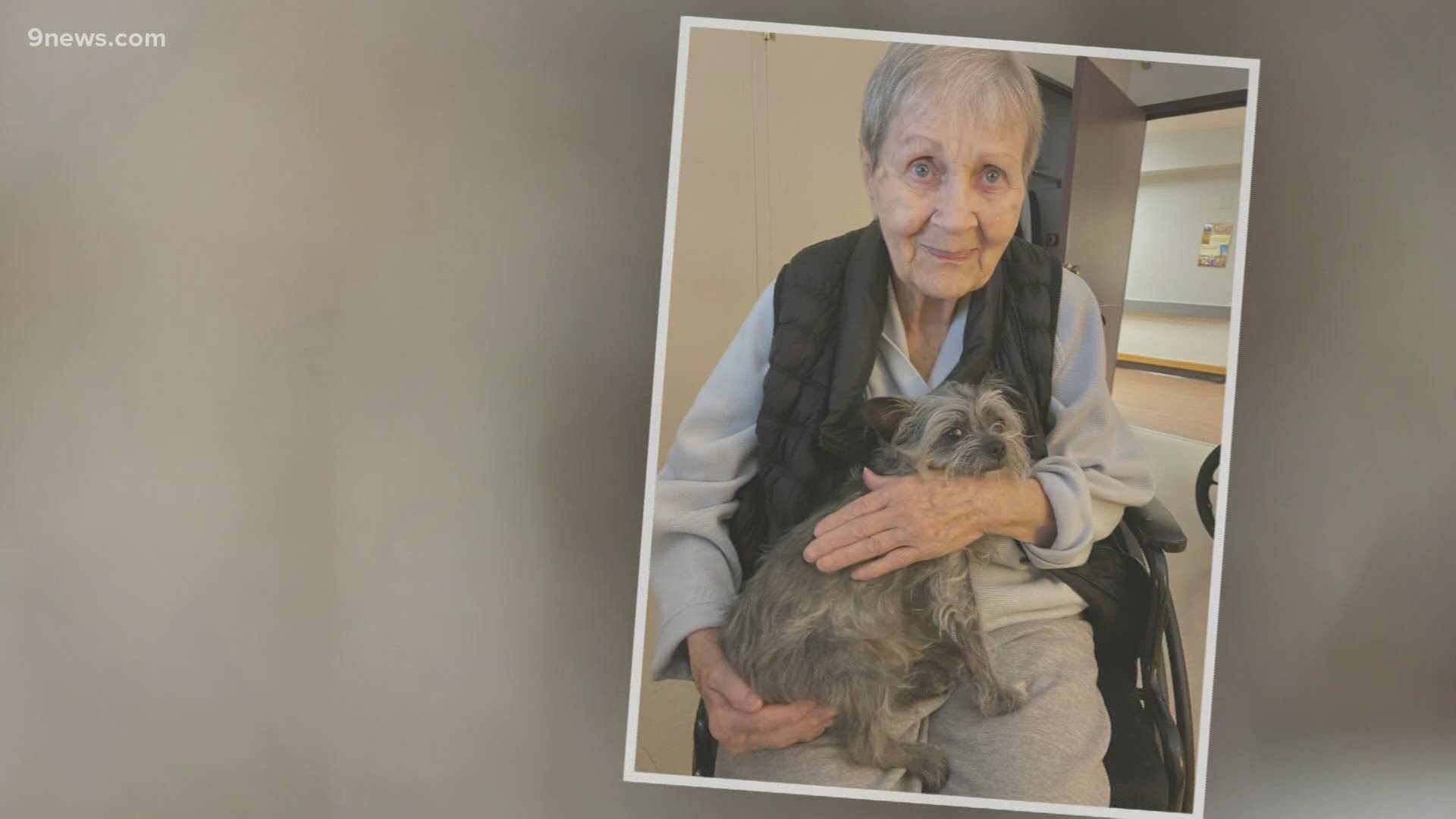 The fines and bonuses all came from the U.S. Department of Health and Human Services (HHS), 9Wants to Know found through an analysis of federal data. Facilities were paid $10.3 million more than they were fined.

“It’s unbelievable,” said Brian Lee, who runs Families for Better Care, a group that advocates for nursing home residents and their families.

In all, 1,103 residents died at Colorado nursing homes that had outbreaks, paid fines and pocketed bonuses in 2020, 9Wants to Know found.

RELATED: 9 takeaways from 9Wants to Know's investigation into pandemic fines and payments to nursing homes

One of them is Sierra Vista Healthcare in Loveland, where 18 residents died of COVID-19 during an outbreak that started in December. The Centers for Medicare and Medicaid, an agency within HHS, fined Sierra Vista $39,484.25 in 2020 for poor infection control and other pandemic failures.

That fine was based on inspections of the nursing home that found problems with mask wearing and other failures. But the Health Resources and Services Administration, a different agency in HHS, paid Sierra Vista $183,840.79 in 2020 because its COVID infection rate was lower than Larimer County’s and the mortality rate was lower than a national standard during a three-month period last fall, according to HHS records.

“These bonus payments have eroded enforcement to the point where it's now laughable, and it doesn't do what it's supposed to do —  and that's supposed to incentivize better performance for these facilities,” Lee said. “So if the nursing homes know they're just going to get their fine money back why even care?”

Annaliese Impink, spokesperson for Sierra Vista Health Care, declined a request for an interview but issued a statement via e-mail. She did not address the question of payments but said, in part, that “significant steps [were] taken to protect our residents and staff,” such as education efforts, distribution of protective equipment and adherence to the guidance of health officials.

Impink refused to answer follow-up questions about why more was not done to mandate mask wearing among staff members, the exact “corrective actions” Sierra Vista took or what the facility did with the payments.

One of those who died at Sierra Vista was Glenda Kay Powell.

Powell’s niece, Tonya Morrow, remembers her as a kindhearted “helper” with a career as an emergency room and home care nurse in Michigan.

Powell was also a prankster. Armed with a remote control fart machine, she lightened the mood during a community dinner.

“She stuck it under the table and made like 20 different noises, really bad,” Morrow said.

Powell thought U.S. troops in the Middle East would get a kick out of it too.

“She said ‘these guys are under a lot of stress, I'm sending them the fart machine so that they can have fun with that over in Iraq’ and they did,” Morrow said. “They put it underneath like the sergeant’s seat in the Jeep and set it off.”

But Powell had a string of health issues —  strokes, lung cancer and worsening dementia. She moved to Sierra Vista Health Care Center in Loveland in the spring 2020.

Morrow noticed staff members were not wearing masks when she would visit her aunt — visits carried out through a window because of the pandemic. Masks would be under chins, around necks or over heads — not over mouths, she said. The actions of one nurse aide stood out to Morrow.

“She would kiss Glenda on the forehead and on the cheek and hug her and say ‘it's OK,’” Morrow said. “And there's spit flying.”

Powell died days after she tested positive for COVID-19. She was one of 18 deaths at Sierra Vista during an outbreak in December and January, according to Colorado Department of Public Health and Environment data.

At least 2,516 residents have died in health care facility outbreaks like nursing homes and assisted living centers in Colorado, according to CDPHE data downloaded in March 2021.

Sierra Vista was fined multiple times for poor infection control practices, like a lack of mask wearing. The HRSA paid the facility bonus payments for doing a good job during the pandemic that were significantly higher than what CMS fined it. CMS and HRSA are two federal organizations within HHS.

According to a months-long 9Wants to Know analysis of state and federal data,  117 facilities were fined, paid and had an outbreak.

A pattern of non-mask wearing at Sierra Vista

What Morrow noticed during her lawn chair visits with her aunt was not an isolated incident, according to inspection reports and conversations with three former Sierra Vista nurses.

The Centers for Disease Control and Prevention issued guidance that wearing a mask over one’s nose and mouth prevents the spread of COVID-19 by stopping droplets from transferring in the air.

Lisa Alman worked as a nurse at Sierra Vista’s memory care unit for more than a year and said she routinely saw people with their masks under their chins and below their noses.

“We were dealing with the population most at risk (of) dying,” Alman said.

She said she quit in December after being bullied for reminding her colleagues to wear a mask.

“I had conflict with people not wearing masks and I would get upset because I looked at this as a very scary virus ... especially because people in that area wouldn't be able to protect themselves by wearing a mask because they don’t have the cognitive abilities to keep a mask on,” Alman said.

When Alman brought her concerns to management, she said she was not taken seriously and changes were not made to reinforce the need for mask wearing. She got a reputation as a “mask boss” and people no longer wanted to work in her section. Alman quit on Dec. 11, two days after CDPHE data shows the Sierra Vista outbreak began.

“It was just a very helpless feeling,” Alman said. “... I left out of fear. But then I had so much guilt from leaving like I felt like I was abandoning them, but I didn't abandon them. I didn't. Not in my heart.”

Records show Alman was right —  twice. Inspectors came to Sierra Vista in August 2020 and found that COVID-19 protocol, known as infection control, was not being followed. Multiple staff members did not wear their masks the correct way or wash their hands. For example, regulators noticed a speech therapist and resident care advisor not following rules during breakfast.

“Both had their masks below their noses and the (speech therapist) repeatedly touched her mask with her bare hands and did not perform hand hygiene,” the report said.

Regulators came back in December and noticed staff members were wearing masks, but not the mandated N95 masks which are rated to do a better job of stopping the spread of disease.

Impink, the Sierra Vista Health Care spokeswoman, said in an email the health of residents in the facility’s top priority and that “significant steps” were taken to protect those that live and work there.

“The center took the findings of the survey team seriously and immediately put corrective actions in place to address the specifics of the surveyor’s findings,” Impink wrote. “The center was found to be in compliance once corrective plans were implemented and the center worked diligently with staff to continue to educate them regarding the importance of hand hygiene, proper use of personal protective equipment and other infection control practices.”

Impink declined a request for an interview to answer 9Wants to Know’s questions.

But 9Wants to Know found that Sierra Vista was paid $183,840.89 in the months leading up to the December 2020 outbreak by the HRSA, payments detailed in federal records.

Tonya Morrow said the fines were not surprising, but the payments were shocking.

“That makes no sense,” she said. “How can you be fined for violations and at the same time financially awarded?”

Morrow called for a “better system” with stricter protocols and surprise inspections so others do not have the same fate as her aunt.

117 facilities paid, punished and with an outbreak

Lee was the state long-term care ombudsman of Florida for years and runs Families for Better Care, a national nursing home watchdog group which advocates for improved resident care within long-term care facilities. He said the way in which the payment outweighed the fine at Sierra Vista and elsewhere is indicative of a wider problem.

“What other job or arena or industry do you get awarded bonus monies for poor performance?” Lee said.

Of the 132 facilities in Colorado that were fined for poor infection control practices and problems related to the pandemic — not wearing masks, washing hands or notifying families or the federal government about an outbreak — 122 also received payments from the HRSA for having fewer COVID-19 cases compared to the community it operated in and fewer COVID-19 deaths than a national benchmark. Of those that were fined and received a payment, 117 had a COVID-19 outbreak, 9Wants to Know's data analysis showed.

Both federal agencies refused a request for an interview to explain the contradictory policies.

Lee said payments vastly outweighing the fines could take away motivation for nursing homes to care about meeting the benchmarks outlined by the federal government and makes enforcement “laughable.”

The 9Wants to Know investigation found 107 facilities paid by the HRSA recouped more than they were fined by CMS. The Colorado State Veterans Home at Fitzsimons had the largest gap between fines and payments, according to the data. The facility was paid $394,899.40 more than it was fined.

“It is just a total gut punch to the residents that these nursing homes have been given these dollars, these bonus payments for the so called ‘good performance’ during this entire pandemic,” Lee said.

Send us a tip

If you have information or had a loved one die in a nursing home on the list, text us a tip to 303.871.1491. You can also reach the reporters on this story directly by email (zack.newman@9news.com or kevin.vaughan@9news.com).

“The health, safety and wellbeing of our residents is our number one priority. Throughout the pandemic, we have worked closely with local, state and federal health authorities to follow their guidance, and have taken significant steps to protect all our residents and staff, including providing appropriate PPE, educating staff on infection control procedures, and other precautions and protocols outlined by the Center for Disease Control (CDC).

Sierra Vista Healthcare Center received two low-level infection control deficiencies as a result of the August 25th and December 21st surveys.  The center took the findings of the survey team seriously and immediately put corrective actions in place to address the specifics of the surveyor’s findings. The center was found to be in compliance once corrective plans were implemented and the center worked diligently with staff to continue to educate them regarding the importance of hand hygiene, proper use of personal protective equipment and other infection control practices.

It has been a difficult period for our residents and staff, but I am happy to say that today all of our residents are COVID-free . We thank our staff for all their hard work to keep our resident as safe as possible during this terrible pandemic.”

A link to the data and a walk-through of how we did this story: