Court documents allege that a woman tried to mail remains from Canon City to an address in the United Kingdom. 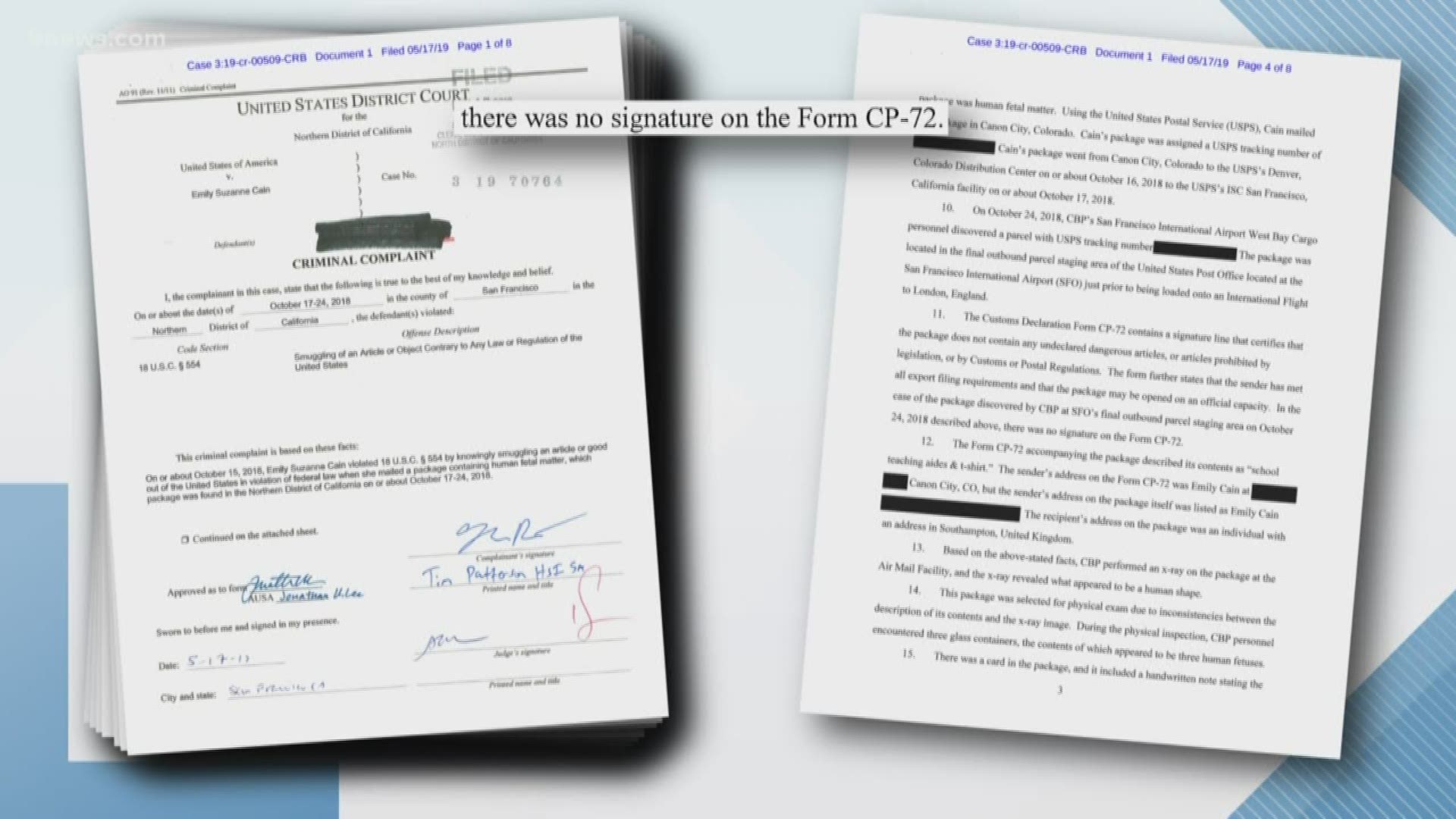 CAÑON CITY, Colo. — Homeland Security officials in California have unraveled a scheme allegedly involving a Colorado woman who is accused of trying to sell human fetuses through the U.S. Mail, 9Wants to Know has learned.

The fetuses are believed to be those of stillborns from the 1920s, according to federal court records.

Emily Suzanne Cain, 38, is scheduled to appear in federal court in San Francisco on Wednesday afternoon after pleading not guilty Tuesday to charges she violated a U.S. law that prohibits the transfer of human fetal tissue.

U.S. Marshals first arrested Cain in Fort Collins. She was released on a $5,000 bond with a GPS monitor.

A criminal complaint filed after a grand jury indictment that was unsealed in U.S. District Court in Northern California outlines the case against Cain. It alleges that Cain mailed a package in Canon City containing human fetal tissue to an address in the United Kingdom on Oct. 15, 2018.

The package, labeled “school teaching aids and T-shirts", caught the attention of U.S. Postal Service workers because a customs form -- which certifies that the package does not contain dangerous items -- was not signed. That triggered a process that the package be formally examined.

According to the criminal complaint examined by 9Wants to Know, U.S. customs agents at the San Francisco International Airport X-rayed the package and it revealed, “what appeared to be a human shape.”

Since what was seen on the X-ray and what was listed on the package description didn't match, a decision was made to open and examine the contents of the box, the complaint says.

According to the complaint, personnel found three glass containers, “the contents of which appeared to be three human fetuses.”

The box also contained a hand-written card signed “Emily” apologizing for the delay.

The box also contained a T-shirt with an image of something called the Purgatory Museum and the words “Real Shrunken Head.”

The remains were taken to the San Mateo County Coroner’s Office for examination, where they were positively identified as human remains, according to the complaint filed in federal court.

In the following weeks, the contents of the box were dusted for fingerprints, which matched those of Cain and Glenn McGinty, according to the complaint.

Back in Colorado, the complaint says Cain decided to call the USPS customer service line asking why her package was held up in San Francisco. She gave her name and tracking number for the package and said the recipient of the package is “getting a little antsy," according to the complaint. That call was on Oct. 30.

Cain called back a few days later on Nov. 2, again asking why her package was held up, the complaint says.

Investigators, meanwhile, searched Cain's Facebook page, where they said they found a posting where she “informed another Facebook user that she recently acquired a collection of three fetal wet specimens and one fetal skeleton wet specimen from a university lab collection." That posting included seven photos, according to the criminal complaint, which also indicated that Cain posted she would sell all four specimens for $20,000.

According to the indictment, Cain posted the following message:

“We don’t always post publicly. Especially with pieces like these ...' and '... too controversial to be up everywhere, for everyone to see. I try to keep them for the special clients and others we know may have interest in them.”

In another Facebook post, the court document says Cain "explained that she recently purchased the fetal specimens from a female friend who is the head of the biomed department for a university who is downsizing and recently picked them up in a U-Haul trailer."

Photos posted on Cain’s Facebook page led federal investigators to trace the specimens to the Department of Medical Education at Creighton University in Omaha, Neb, according to the complaint. Officials there confirmed they came from their anatomy department and it was believed "the fetuses were stillborn and had been donated to the university between 1920 and 1930."

University officials told investigators its policy is to cremate, not sell, specimens that they no longer need to keep.

A spokesperson from the University said "we are cooperating with federal authorities." They provided no other comment.

Cain has been released on a $5,000 bond with a GPS monitor, according to U.S. Attorney's Office spokesperson Jeff Dorschner.