Data shows a surge in Colorado deaths. Only some are directly due to COVID-19

Officials believe some deaths could be a result of people staying away from hospitals during the pandemic. Others may be sign of strain on the medical system. 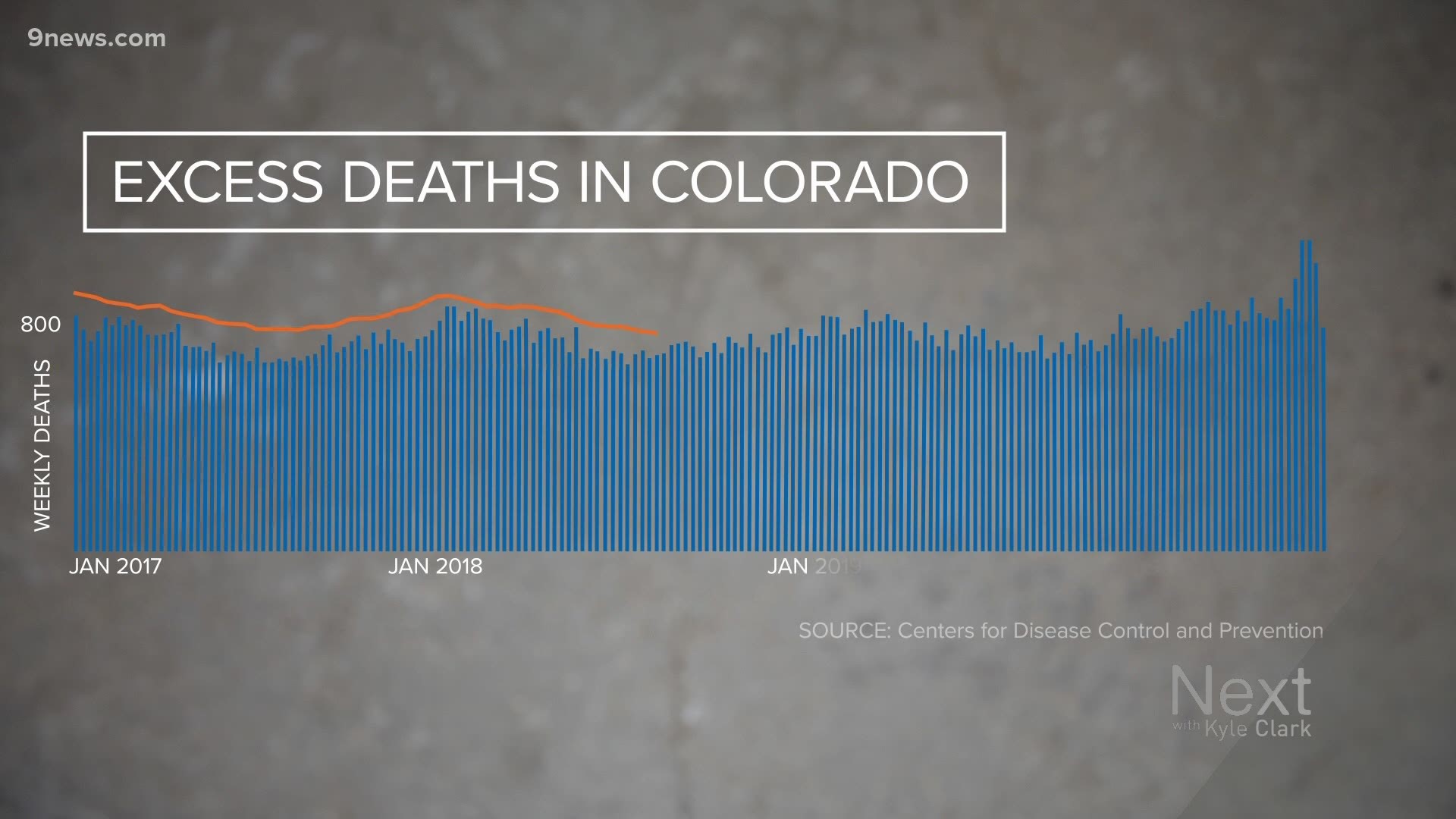 DENVER — The spread of COVID-19 has already claimed as many as 1,299 lives in Colorado – but it may also be at the root of a surge in deaths that haven’t been blamed on the pandemic, 9Wants to Know found.

So far in 2020, the Centers for Disease Control and Prevention (CDC) has concluded that Colorado has experienced at least 134 more deaths than the organization’s computer models predicted – a number that could actually be as high as 532, depending on how it’s calculated.

“Excess deaths are deaths that are above and beyond what we would normally see,” said Bob Anderson, chief of the mortality statistics branch at the CDC’s National Center for Health Statistics. “We do see excess deaths sometimes during bad flu seasons – you’ll see the number of deaths go up above what's normal for a given time period.

“But in this time period right now we're seeing excess, you know, well above what we would normally see – even in a bad flu season.”

Calculating excess deaths can be done in different ways.

The CDC constantly looks at historic death data – literally, how many people died each week in each state. Researchers then make adjustments to that data to account for demographic changes, such as population growth, and use a computer algorithm to predict what it calls “expected” deaths.

RELATED: 'Unequivocally no': Colorado says state has not changed death certificates during pandemic

When actual deaths rise above those expected, they are classified as excess deaths.

The idea that deaths are not directly tied to COVID-19 is widely embraced among those who study the issue.

Locally, Douglas County Coroner Jill Romann found a 40% increase in deaths in April – none of them directly attributed to COVID-19. Nationally, the CDC lists 5,293 excess deaths between March 11 and May 2 across the country that weren’t tired directly to the pandemic, and Yale School of Public Health analysis of federal data, performed for the Washington Post, found as many as 13,500 excess deaths across the country as of April 11.

Weeks or months down the road – after complete reports are in – researchers will have a much better idea of what’s led to the surge, but the prevailing suspicion is that undiagnosed COVID-19 cases are at least partly to blame – and that the disease could have other ramifications that contributed to other deaths.

“They could be deaths that we would refer to as indirect deaths, that are associated with a pandemic but not specifically attributable to COVID-19,” the CDC’s Anderson said. “And that would be things like, you know, people not being able to get access to care.”

Glen Mays, professor and chair of the Department of Health Systems Management and Policy at the Colorado School of Public Health in the Anschutz Medical Campus, agreed – access to care is an issue.

“We know that people who are aware of the pandemic, understandably, are less likely to seek care during this period of time, and less likely to go to the emergency department – even though you may be having some chest pains or may be having signs of a stroke or something as well,” Mays said. “So we're likely also to see some elevated mortality from other conditions because people are reluctant to seek medical care during this period of time.”

“Many hospitals over the last four to six weeks have been operating much closer to their to their capacity, both in terms of staffing and in terms of supplies and equipment,” he said.

That may mean it takes longer to be seen when someone does go to the hospital.

And there could be still more factors – such a longer response times for emergency medical services and overworked employees at long-term care centers – that could affect the number of deaths that have occurred.

“Eventually we'll have more granular information that will allow us to try to parse out the those issues,” Mays said.