The legislation was passed two years after a 9Wants to Know investigation found suspected illicit massage businesses moved from Aurora to Denver. 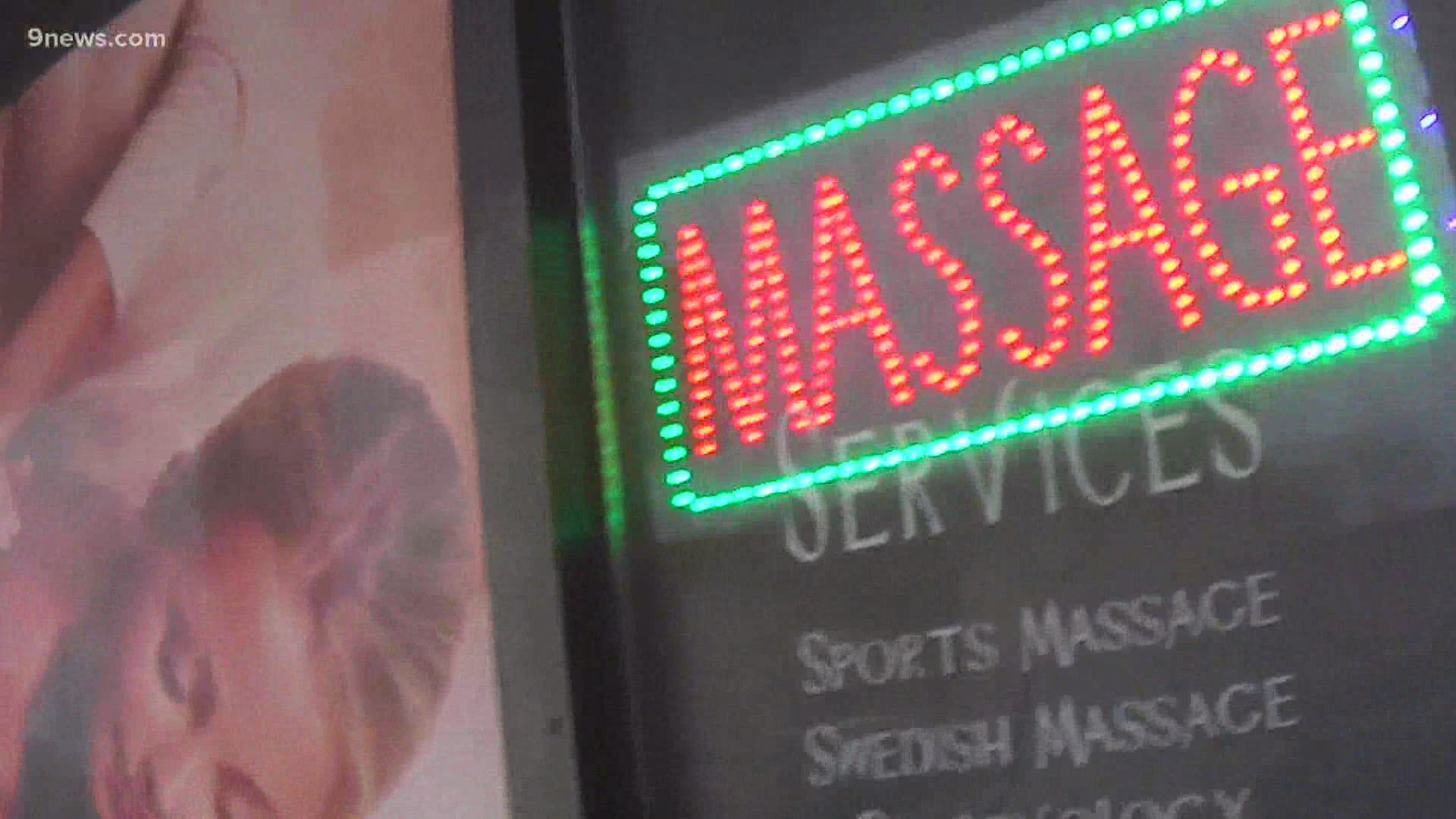 Paul Kashmann, a city council member and main proponent of the bill, said the goal of the new legislation is not to punish massage businesses that follow the rules. The aim is to help trafficking victims.

“In many cases, the women providing these services are not there voluntarily, to make a little money to support their families,” he said. “In reality, they have been trafficked involuntarily to Denver from other countries, or other parts of the US and are hostages being forced to engage in illicit acts for the profit of those by whom they've been trapped.”

Starting on July 1, 2022 – all massage businesses will need a $500 license to operate in Denver. Schools authorized to teach massage therapy, athletic training rooms and solo practitioners with a state license will be exempt from the rule.

The ordinance does not allow anyone to live in a massage business. Records collected by Aurora inspectors and obtained by 9Wants to Know showed full refrigerators, microwaves and piles of clothes. Businesses can not be open between 11:00 p.m. and 5 a.m. and can not advertise sexual acts online.

According to a 2017 report by the Polaris Project, those are all indicators of human trafficking.

People applying for the license have to pass a background check to assure that they hold a state massage therapist license. If their state permit has ever been revoked or denied, they can not get one in Denver. The Denver license is only valid for a year. After which, business owners need to reapply and complete another background check through the Colorado Bureau of Investigation.

Kashmann said during the Monday city council meeting that this ordinance gives regulators more power and creates a paper trail to the head of the business.

“We have stronger tools by which to end the horror to which these women have been subjected,” he said. “And finally, instead of focusing on the women being forced into servitude, we are finally going after the true criminals who create these intolerable environments.”

According to the ordinance, the massage license for the operation can be revoked if a business has a “continued pattern of criminal behavior” including complaints of offers for sex or indicators of human trafficking. Employers are also required to maintain records, like contact information and a copy of their massage therapist license, on-site with information kept on who is giving massages and when.

Applicants can be denied if they have a criminal history, especially for sex crimes or fraud. The ordinance also said that losing the state massage license can lead to being denied a Denver permit.

Also, if a massage business was shut down, another can not take its place for two years.

Aurora instituted tough new rules aimed at shutting down parlors that offer sex for cash, closing 18 of the businesses from 2017 to 2019.

Trevor Vaughn, an inspector with Aurora’s tax and licensing department, has found many locations where women were living inside.

“I would see beds,” Vaughn said in 2019. “I would see luggage. I would see fully stocked refrigerators. Signs that people were living in there. We’d also see some people in less-than-professional attire.”

Aurora spas shut down for suspected sex and human trafficking

1 / 7
KUSA
Inside the Aurora spas shut down for suspected sex and human trafficking.

But, after being shuttered in Aurora, 9Wants to Know found that seven of them moved to new locations and reopened for business.

9Wants to Know confronted three owners who had businesses shut down in Aurora. Reviews on online posts suggested sexual activity was happening at those Denver locations. All three denied customers could buy sex there when asked about it.

“So we have nothing to do with that,”  Huaimei Li said via a Mandarin translator in 2019. “We only provide massage services.”

Aurora’s ordinance went into effect on May 21, 2018, which allows the city to inspect all massage businesses to ensure every masseuse has a state license. The Aurora ordinance also requires parlors to keep detailed logs of massages and requires employees to be fully clothed. The Aurora ordinance is very similar to the one adopted by Denver.

“I wouldn't be surprised if with the passage of this bill, some of those same businesses decide to move on to more welcoming turf,” he said. “While we don't wish to push this problem onto others, we hope our neighbors will join us in letting folks know that Denver and Colorado does not tolerate this lingering form of slavery.”

RELATED: Man at center of 9Wants to Know investigation among 7 indicted in human trafficking operation

In 2019, 9Wants to Know used a hidden camera and captured a worker at Apple Spa offering a sex act.

Documents show Kuo was the owner of Apple Spa for about three years until the Apple Spa business dissolved a few months after the television news investigation aired.

Lt. Andrew Howard leads the Denver Police Department’s Vice Unit that is responsible for illicit massage parlor investigations. He was unaware of massage businesses bringing illegal activity with them from Aurora when interviewed in 2019.

“So, I have heard information from you that there are some locations that have moved from Aurora to Denver,” Howard said. “Information that I haven’t heard yet is that they’re involved in illegal activity. If they are, I certainly want to know that, that certainly is a concern.”