9Wants to Know spoke to five people whose injuries may cost taxpayers a significant amount of money as legal claims relating to riot-control projectiles pile up. 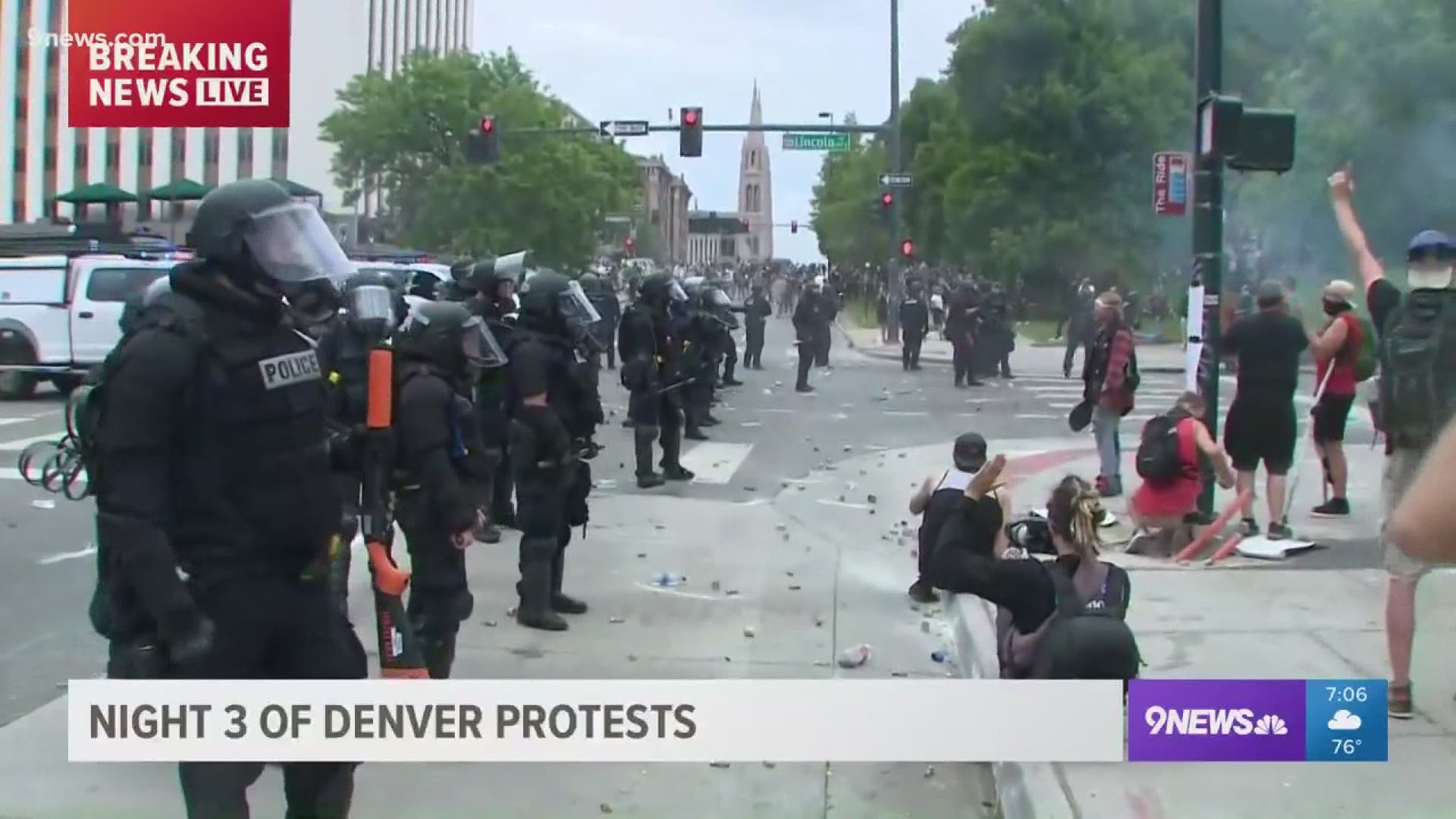 DENVER — As thousands of people gathered downtown during the George Floyd protests, one riot control method may go down in history as a serious problem that caused permanent and costly injuries to this city’s citizens.

Known as “foam” and “sponge rounds,” projectiles fired from a 40 mm launcher at nearly 90 miles per hour were supposed to be aimed at the body, however several people and their attorneys are coming forward with injuries to the skulls and eyes.

Russell Strong, 35, was hit in the face while protesting at the corner of Lincoln Street and East Colfax Avenue on May 30. He lost his right eye.

“There’s just an immense amount of loss of ability and coordination and confidence,” Strong said over a Zoom interview with 9NEWS. “It’s almost impossible to put into words the mental anguish.”

Jax Feldmann,21, lost sight in his left eye and claimed he wasn’t protesting when police shot him with a 40 mm round. He said he was simply walking near the corner of Grant Street and Colfax.

“Everything’s harder," Feldmann said. "I’m vulnerable on my left side. Anybody can walk up to me and do anything they want, I’m very vulnerable."

Megan Matthews, 23, was also hit in the face during the protests and suffered fractures around her eye and nose. Eyesight in her left eye has been diminished.

“Everything went black for me immediately,” said Matthews, who claimed she was hit by a projectile while handing out food at the protests. “There’s a lot of trauma to my eye. The pupil still kind of has trauma to it to the point where it really doesn’t constrict all the way.”

After obtaining records from the Denver City Attorney’s Office and contacting various law firms, 9Wants to Know is aware of seven people who expect to file lawsuits against the city over 40 mm projectile injuries.

Some people have notified the city about their potential lawsuits in official legal letters titled “Notice of Claim” that request preservation of evidence.

Police have been told to stop using 40 mm launchers

A spokesperson for Denver Police said officers deployed 90 rounds from 40 mm launchers during four days of civil unrest in late May.

According to the department’s use of force policy, officers are required to avoid aiming 40 mm launchers at heads and eyes.

Yet the amount of reported injuries during that time prompted a successful temporary restraining order against the city that limited their use. A judge granted the order June 5.

A day later on June 6, Director of the Department of Safety Murphy Robinson issued a memo to Chief of Police Paul Pazen.

“The nature of the injuries being reported in recent days has made me concerned and I want to ensure steps are being taken immediately to insure no further injuries occur,” Robinson wrote.

“I request that you immediately consider prohibiting the use of 40mm launchers during any upcoming protest activities against any individual who is present in a crowd of people," the memo also said.

Injury claims will be expensive for taxpayers

Through their attorney Ross Ziev, two women have each notified the City of Denver they are seeking damages that may be “upward of $1 million” for injuries relating to 40 mm rounds.

Ziev represents Matthews, who suffered an orbital fracture and Suzy Dennis, 27, who has permanent damage to a finger that was almost amputated.

“We never want to see this happen again,” Ziev said, adding the claims are more than just about money.

“I don’t think we can ignore the fact my two clients are two young white women," Ziev said. "It should have never happened to them. But this is merely a taste of what this movement [BLACK LIVES MATTER] is all about."

A settlement doesn’t necessarily mean the city would admit wrongdoing either, Traylor said.

“If there’s a plaintiff that wants to get that emotional satisfaction of ‘hey yes, I was validated,’ they may not get it in an apology….but sometimes they can look at - well, they wrote a check," Traylor said.

Any settlement that is paid out by the City of Denver would be covered by taxpayers since the city is self-insured.

The Department of Public Safety declined an on-camera interview.

“Any time there is alleged use of improper force by any of our agencies, it’s troubling," Robinson wrote in a statement. "While I cannot comment on specific cases, know we are committed to fully investigating all incidents related to the civil unrest experienced in Denver."