A fatal drunk driving crash, 18 years in prison, then 3 more DUIs — and a plea deal

Editor’s Note: All this week on 9NEWS and 9news.com is an in-depth look at repeat drunken drivers, the tragedies they’ve been blamed for and how a new state law intended to crack down on them is – or isn’t – working.

After Lana Foery is asked about her son, Arthur Lance, she reached back in memory and grasped a gold chain dangling from her neck.

“One Mother's Day, he jumped on his bike and rode to Southwest Plaza,” she said. “And he went to a jewelry store and bought this little crystal bear to give to me.

“He always wrote notes – Mom, I took a dollar out, I will pay you back tomorrow. And he'd leave a note and he’d tape it from the ceiling. And he always paid me back that dollar.”

He was a boy who wanted to serve a community – like his dad, Marty, a longtime Denver police detective. But his parents said he could never be a cop, uncomfortable with the idea he might one day have to take a life. So he made a different plan.

“He wanted to be a firefighter,” Marty Foery said. “That was his desire.”

He was in school, studying to be a firefighter, But talking about their son means talking about the day he died – Sept. 10, 1994. The day a drunken driver smashed into his motorcycle in Southwest Denver. The day that opened a wound that still hurts nearly a quarter century later. 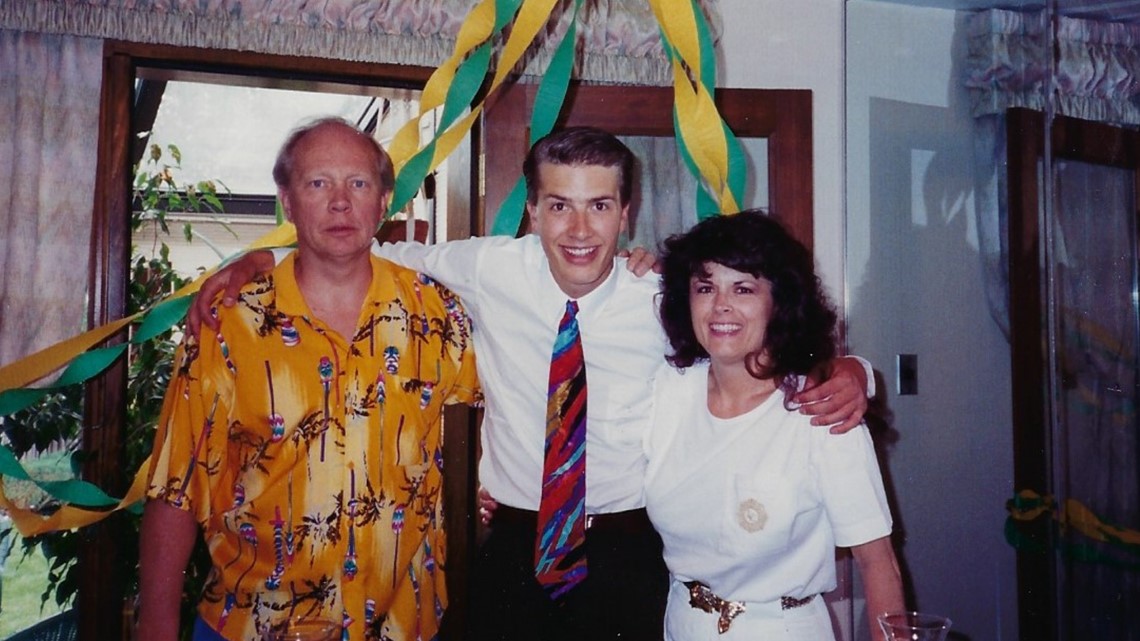 “To describe it – it’s like if your arm was torn away from your side,” Lana said, pausing to fight her emotion, “and it never heals. Every time I think about him, I think him as having his life going on somewhere out there. And I think about him being married having children. So that's how I get through it.”

And it means confronting a reality: That the man who killed him is still drinking, still driving – arrested three times since 2016 for driving while under the influence of alcohol. He’s exactly the kind of repeat offender targeted by a 2015 law that made it a felony to get convicted of drunken driving a fourth time. The law carries a maximum penalty of six years in prison.

But Patricio Martinez hasn’t gone to prison. He was one of 184 people a 9Wants to Know investigation found who were given plea deals that gave them a chance to have that felony DUI conviction disappear.

“I had just seen him a couple hours earlier and he was on his motorcycle,” Marty told 9NEWS. “I just told him, be careful – see you after a while.”

A few hours later, there was a knock at the Foerys’ door. Lana was at work. Marty opened the door to find a Denver police captain he knew. The captain told him that there’d been a traffic accident, that Arthur Lance was dead.

Marty knew he had to go to the telephone company office where Lana was working to tell her. He got a neighbor to drive him. He got her into the car. Then he told her.

In a couple weeks, Marty went back to work.

Lana spent most of a year largely at home. Lana also consoled herself with a new granddaughter, born less than a month after her son died.

“Having that baby, that grandchild – it was holding the child that helped me stand up again,” Lana said. “I couldn't have even survived. Because I know when a mother loses a child nothing – nothing – makes them heal. Nothing. You know you just get through it. You get through day to day.”

Her employer kept her job open. A circle of friends surrounded them with love.

“We had a lot of great friends that came to our house and were beside her the whole time,” Marty Foery said.

The man driving the red Chevette was Patricio Martinez, then 56 years old. He fled to a nearby church, where a firefighter found him hiding in a bathroom. According to court documents obtained by 9Wants to Know, he had a blood-alcohol level of .266 – then 2½ times the threshold at which a Colorado motorist was presumed to be intoxicated.

Martinez was on his way to the police station, in the back of a patrol car, when he learned that the motorcyclist he’d hit had died.

“I never killed anyone before,” he said, according to Denver police reports.

There would be two mistrials – juries that hung over the question of whether Arthur Lance was speeding – before Martinez was ultimately convicted of DUI and vehicular homicide in a third trial.

“I recall feeling a tremendous amount of relief, primarily,” Michael Pellow, the prosecutor who took Martinez to trial, recalled recently. “To me this was an open and shut case. To me he should have been convicted of vehicular homicide I the first trial.”

A Denver judge sentenced Martinez to 24 years in prison, the maximum term.

Denver police officers arrested him for DUI the first time on Nov. 29, 1961, according to a department rap sheet obtained by 9Wants to Know. He pleaded no contest to DUI and was given probation. Because original documents no longer exist, it is not known whether a test was performed to determine his blood-alcohol level.

Denver police arrested him for DUI again on Oct. 25, 1981, and he pleaded guilty to the reduced charge of driving while ability impaired by alcohol.

Arvada police officers arrested him Feb. 1, 1985. His blood-alcohol level was .286 – nearly three times what was at the time the legal limit.

Then there was a DUI arrest by Adams County sheriff’s deputies on Feb. 28, 1988 – his fourth conviction for drinking and driving.

After Martinez was locked up for killing Arthur Lance, Marty and Lana fought to keep him there, driving to prisons all over the state, speaking at every one of Martinez’s parole hearings. Their words worked – Martinez spent more than 18 years behind bars before finally being released on March 28, 2013.

After getting out of prison, Martinez, who’d always lived in the Denver area, moved south to Walsenburg, 50 miles from the New Mexico line.

In January 2016, Marty and Lana were in Fort Lyon, burying her mother, when a parole officer called them: Patricio Martinez had been busted by a Colorado State Patrol trooper for drunk driving after he was stopped after dark in Walsenburg, his headlights off.

His blood-alcohol level was .086 – above the new threshold for DUI established by Colorado lawmakers in 2004 of .08. It was his sixth alcohol-related traffic conviction. The Foerys had been notified because Martinez was still on parole.

The state revoked his probation and sent him back to prison. He finished his sentence Dec. 12, 2016 and returned to Walsenburg.

On April 28, 2018, a state trooper was parked in Walsenburg, working on paperwork, when he saw Martinez drive up and stop across the street.

“I seen you pulled up, and when you pulled up I seen you exit the vehicle, take a drink of the beer that’s in the center console, and then stagger towards the door, OK?” the trooper told Martinez after confronting him, according to dash cam recordings obtained from the Colorado State Patrol by 9Wants to Know.

Martinez refused to submit to roadside tests or a blood or breath test to determine his blood-alcohol level.

The case was still pending when Martinez was busted again, on Aug. 29, 2018, by a Huerfano County Sheriff’s Deputy, according to court records.

But when Martinez went to court Nov. 8, he got a deal – the prosecutor, Henry Solano, and judge, Claude Appel, agreed to dismiss the first 2018 DUI and give Martinez a deferred sentence on the second. A deferred sentence – something often reserved for a first-time offender – gives the defendant a chance to complete a period of probation and, if he or she can do that the case will be dismissed.

In this case, it gave Patricio Martinez – who had already killed someone, who had been arrested driving drunk eight times – the chance to avoid a felony conviction. He was required to meet regularly with a parole officer, stay off the streets, and stay dry.

And Martinez was not alone: A 9Wants to Know investigation found 184 instances in which people were convicted of felony DUI and given deferred sentences.

Appel, who has since retired, declined to discuss the case. Solano did not return a message left at his office.

But Denver District Attorney, Beth McCann, who as a state legislator sponsored the felony DUI law, said she was surprised to learn how the case was handled.

“That's a person that one would think probably isn't – shouldn't be driving around,” she told 9Wants to Know earlier this month. “I don't know all the facts, so it's just something I wouldn't expect unless there's some exceptional reason for that.”

Christina Habas, a former Denver District Judge now practicing law at Keating Wagner Polidori Free in Denver, agreed to discuss sentencing decisions. She was asked whether someone like Martinez should be eligible for a deferred sentence.

“You would think the answer be so simple, that the answer would be absolutely not – after four times it should never happen again,” she said.

But she said sentencing is more complex. Judges are required to consider other factors – the defendant’s family situation, whether the person has a chance to be rehabilitated and is willing to undergo treatment, and the risk to the community of releasing him, or her.

Habas also said, however, that the case perplexed her.

“I'd be hard pressed to tell you after seven DUI convictions that I would give someone the luxury of a deferred judgment, that is a luxury,” she said.

Martinez’s plea deal required him to stay out of trouble, stay off the roads, meet with a parole officer, undergo treatment, and stay away from booze.

Martinez’s son would later write a letter to the court.

“We are deeply saddened that our dad has made the choice to drink again after all that he has been through,” Leonard Martinez wrote.

According to the letter, Martinez started drinking again the day after he got the plea deal. There would be other violations, according to court documents, including showing up for meetings with his probation officer after drinking.

Patricio Martinez was due in court Jan. 28 to answer the allegation that he’d repeatedly violated parole.

Marty and Lana Foery were there, driving through a snowstorm to be at the hearing. Martinez didn’t show.

“It's not something that surprised us,” Marty Foery said. “This is the kind of stuff we've been going through since '94.”

On the way out of court, he was asked if there was anything he wanted to say.

“I don’t even really know what’s going on, to tell you the truth,” he said.

He is scheduled to be back in court May 13.

“He’s beat the system, in certain respects, for lack of a better word,” Marty Foery said.

Now it will be up to a new judge to decide whether to give Patricio Martinez another chance – or send him back to prison.

“A jail cell or a prison cell is no place for an 80-year-old man,” said Pellow, the former prosecutor. “That’s not who it’s designed to house.