Editor’s Note: All this week on 9NEWS and 9news.com is an in-depth look at repeat drunken drivers, the tragedies they’ve been blamed for and how a new state law intended to crack down on them is – or isn’t – working.

Brett Shaw drew in a breath and sat in silence for a few moments, focusing on a heartbreaking moment he’ll never forget – one of many he’s experienced since a drunk driver killed his wife and critically injured his daughter on Christmas Eve.

“Certain things we're never going to be able to forget,” he said, shaking his head and pausing as he replayed the tragedy in his mind.

“I should have been drinking coffee with my bride on Christmas morning, watching our kids open up their presents,” he said.

But Sancy Shaw – his wife of 16 years, the mother of his four kids – was gone. And their youngest, Charlee, lay in a hospital bed in critical condition, her recovery far from assured. 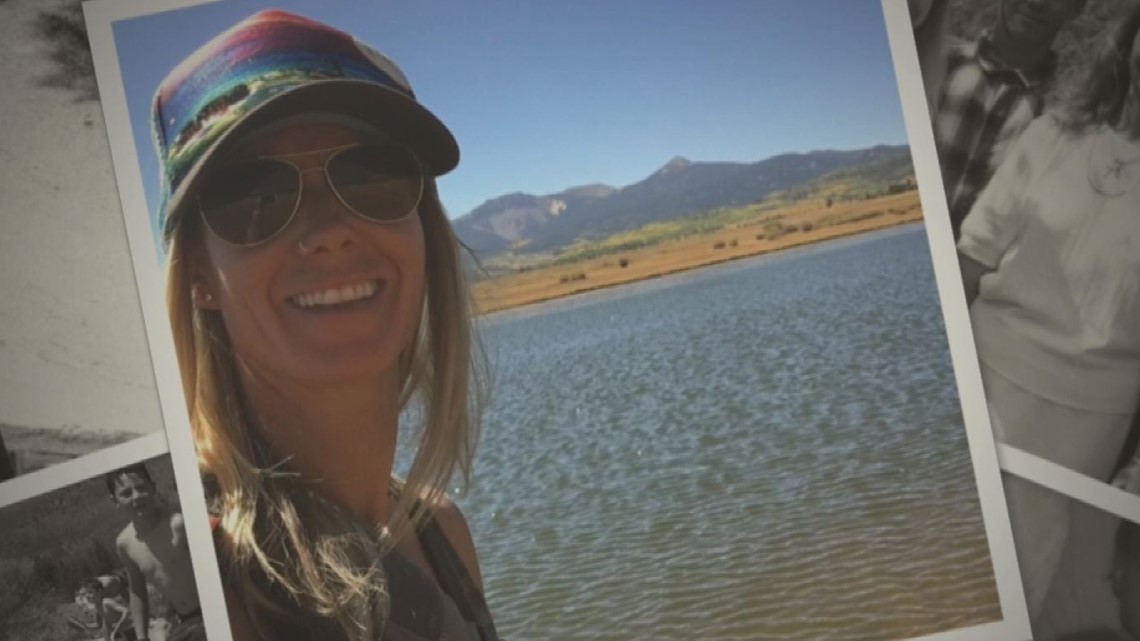 “Instead, I had to sit my boys down and explain to them that their mother loved them very much, and that she was extremely proud of them, and that I don't want them to ever forget that,” he said. “And then explain to them that she had been in a tragic car accident, that their sister was in the hospital fighting for her life, and their mom had died.”

His voice trailed off as he spoke in a room overlooking the atrium at Children’s Hospital Colorado, where 6-year-old Charlee spent every day from Dec. 24 to Feb. 20, being treated for the injuries she suffered when a pickup rolled through a median on Interstate 70 and landed on her mom’s Suburban. Charlee would later return to the hospital on Mar. 13 for surgery to remove a blood clot from her brain.

This family had become caught up in a struggle that has faced Colorado for decades: people still drinking, still driving – even after being busted multiple times.

Since 2015, when Colorado legislators made it a felony to get convicted of drinking and driving four or more times, the grim toll has continued unabated: 161 deaths in DUI crashes in the state in 2016, 177 in 2017, preliminary estimates of as many as 219 in 2018.

That despite the fact that more than 4,200 people have been charged with felony DUI and more than 2,200 convicted of it, a 9Wants to Know analysis of state court data found.

Cheri Goodard was 39 when she was arrested for drunken driving the first time.

It was Feb. 19, 1996, outside Gunnison. According to a Colorado State Patrol officer’s notes, “she was driving and lost control.”

The officer detected the smell of booze on her breath and tried to give her a breath test, but she “did not give a sufficient sample,” according to records.

Charged with driving while under the influence of alcohol, driving with a blood-alcohol level of more than .10, and careless driving, she later pleaded guilty to the reduced charge of driving while ability impaired by alcohol.

A judge sentenced her to two days in jail, put her on probation for six months, and ordered her to perform 24 hours of public service.

Three-and-a-half years later, she did it again.

Stopped for passing another vehicle in a no passing zone at 4:45 in the afternoon on Sept. 25, 1999, she had a blood-alcohol level of .152. Again charged with DUI, she again pleaded guilty to DWAI and this time got 10 days in jail and a year of supervised probation. She was also ordered to perform 100 hours of community service.

She was in Lakewood on June 5, 2001, when she was stopped at 11:28 p.m. and later charged with DUI, driving while her license was under restraint, careless driving and child abuse – because there was a youngster in the vehicle. Her blood-alcohol level was .207, according to court documents obtained by 9Wants to Know.

Again, in court, she got a deal, pleading guilty to a single count of DUI in exchange for the dismissal of all other charges. A judge sentenced her to 365 days in jail – but suspended 315 days and gave her 50 days of in-home detention – and put her on probation for two years. She also was ordered to perform 60 hours of community service.

By the time Goodard was stopped for drinking and driving the fourth time, on Aug. 9, 2014, Colorado had strengthened the state’s DUI law, lowering the blood-alcohol level at which a motorist is presumed to be intoxicated from .10 to .08.

It was 2:30 in the afternoon when a state trooper noticed a car coming toward him on U.S. 50 near Doyleville in Gunnison County, its left-side tires a foot over the double yellow-line. Suddenly, it veered into his lane, according to court documents.

“I turned on my emergency lights and swerved my patrol car onto the right shoulder to avoid a head-on collision,” Sgt. J. Ehmsen wrote in his report.

After spinning around and catching up to the Nissan Sentra, he followed it for a mile and a half with his lights on while it weaved down the road. Once she finally stopped, the trooper found Goodard – then using the name Cheri Moyer – “very polite and cooperative.”

“I explained to her that she had nearly killed me by driving on the wrong side of the road,” the trooper wrote. “She said she had just bought the car, and she did not realize she was in the oncoming lane.”

Her blood-alcohol level was .255 – three times the then-newly established mark of .08.

Charged with DUI, driving with a blood-alcohol content of greater than .08, and failing to drive in a single lane, she pleaded guilty to a single count of DUI and the other charges were dismissed. A judge sentenced her to 156 days in jail and two years of probation and ordered her to perform 60 hours of public service. The judge allowed her to serve her jail sentence on work release.

But one day she returned to the lockup smelling of alcohol. A sheriff’s deputy pulled her out of line and gave her a breath test, according to court records. It showed a blood-alcohol level of .123, and her work-release sentence was revoked. A judge ordered her to serve the rest of her sentence as straight jail time.

The romance of Brett Shaw and Sancy Florquist had been a whirlwind – they were married eight months after they met, and then came the kids and lots of adventures in the outdoors. Fishing. Camping. Motocross riding. Running. Family.

As the holidays arrived, they gathered with Sancy’s extended family in Evergreen, preparing to celebrate Christmas.

But on Christmas Eve 2018, Charlee didn’t feel well, and Brett and Sancy feared she might have strep throat. They decided to take her to a clinic in Golden to get checked out.

“And she walked out the door.”

Sancy sent pictures from the doctor’s office – no strep – and then set out for Evergreen, stopping at a gas station to fill up. She called Brett while she was there.

“See you in half an hour,” she told Brett.

At 8:24 p.m. on Dec. 24, Sancy was headed back her family, driving the family’s Suburban west in the middle lane at an estimated 55 mph – 10 mph below the speed limit – with Charlee buckled into a child seat behind her.

At the same time, a Chevrolet pickup was headed east on the highway in the right lane, right at the speed limit. Cheri Goodard, now 62-years-old, was at the wheel.

The truck went off the right side of the highway, and Goodard steered back into the left, launching the truck into a spin. As it slid through the grassy median, it began to roll. Sancy must have realized what was happening – she jammed on the brakes just before the two trucks collided.

Sancy suffered serious head injuries and died at the scene. So did Goodard, who hadn’t been wearing a seat belt and was thrown through the side window to her death.

Goodard’s blood-alcohol level was .203 – more than twice the legal limit – and she had marijuana in her system, according to an autopsy report.

“I kept just looking out the window waiting for the headlights to come in the driveway,” Brett Shaw said, recalling what happened next. “And they never did.”

Brett tried Sancy’s phone, but it just kept ringing. Every minute that ticked by, Brett’s dread – and that of Sancy’s extended family – grew. There were phone calls to the Jefferson County Sheriff’s Office and the Colorado State Patrol. To the clinic where Sancy had taken Charlee, and a pharmacy where they thought she might have stopped. To the gas station where Sancy’d filled up. To every hospital in the region.

“So then you start thinking the worst,” he said.

Eventually, he and Sancy’s dad and brothers decided to head out and look for her. They were near Evergreen High School when Brett’s phone rang.

The doctor told him Charlee was in the operating room, that he didn’t know anything about Sancy.

Then a victim’s advocate called with the news he was expecting: Sancy had died in the crash.

RELATED | A fatal drunk driving crash, 18 years in prison, then 3 more DUIs -- and a plea deal

“I called my parents first,” Brett said. “At this point, you know it was roughly midnight here and they live back in Pennsylvania, so called them, you know, 2 o'clock in the morning, to tell them what happened. And that started a series of phone calls you never think or imagine you would have to make.”

When he got to Charlee’s bedside in the middle of the night, he saw a battered little girl hooked up to machines and monitors with tubes “everywhere.”

He feared she would die.

Eight weeks later, Brett Shaw is humbled by the first responders who tried to help Sancy and kept Charlee alive until she got to the hospital. For all the love he and his family have felt from friends and neighbors – and strangers, who heard about the crash on the Internet and shared details all over the world.

He’s bothered by the knowledge that Cheri Goodard had four prior DUI convictions and was still drinking and driving.

And most of all, he’s thankful for Charlee’s amazing recovery. The doctors in the beginning thought she might never talk again. They were wrong.

Charlee was released from Children's Hospital Colorado on Feb. 20.

“She is a miracle, and it is exciting for me to talk to doctors that are saying, this is amazing, this doesn't always happen this way, and this is incredible,” he said. “She is a living, breathing miracle.”

On March 13, doctors discovered a blood clot in Charlee’s brain, according to Brett Shaw.

RELATED: Charlee Shaw, who was injured in Christmas Eve crash, undergoes surgery to remove blood clot from her brain

Charlee underwent successful surgery to remove the clot and is now recovering.

"She woke up a few minutes ago and was moving a lot in her left side and not as much on her right, but we will see how things go through the night," Brett Shaw wrote on a CaringBridge page set up for Charlee. "Please keep us in prayer that as she comes out of this anesthesia, that everything works... It’s just a waiting game now."

RELATED | A fatal drunk driving crash, 18 years in prison, then 3 more DUIs -- and a plea deal