The settlement is on behalf of a man critically injured during a fiery Flight for Life helicopter crash in 2015. 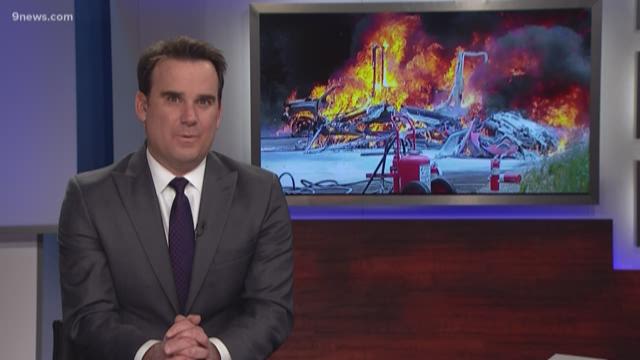 Airbus Helicopters and Colorado-based Air Methods will pay a record-breaking $100 million to settle the lawsuit filed on behalf of a man critically injured during a fiery Flight for Life helicopter crash in 2015.

The amount of the settlement, bound to generate a massive amount of attention within the nation’s aviation community, was announced Thursday, a little more than a month before a trial was to begin in Colorado.

Flight nurse Dave Repsher suffered burns on more than 90 percent of his body after an Airbus AS-350 crashed shortly after takeoff from the Flight for Life base in Frisco, Colorado. As highlighted in a series of 9Wants to Know stories, the helicopter – while relatively new – was equipped with a plastic fuel tank that easily ruptured upon impact.

Surveillance video obtained exclusively by 9Wants to Know shows fuel pouring out of the helicopter a few seconds after impact.

Pilot Pat Mahany died shortly after the crash. While the fire contributed to his death, an autopsy report also showed massive internal injuries.

“The fuel system was not crash resistant,” explained Denver attorney Murray Ogborn who represented the Repshers along with Missouri-based attorney Gary Robb.

Had the fuel system not ruptured upon impact, “[Dave] would have walked away,” explained Ogborn.

While the Federal Aviation Administration ordered all newly certified helicopters to have crash-resistant fuel systems in 1994, it’s rule didn’t apply to all newly built helicopters.

The loophole – one members of the Colorado Congressional delegation have since tried to close – has allowed manufacturers to continue to build thousands of helicopters with antiquated fuel systems since then.

For example, the helicopter that crashed in Frisco was close to 2 years old, but the model (the AS-350) received FAA certification in 1977. That meant, according to the FAA’s own rules, the relatively new Flight for Life helicopter needed only have a fuel system onboard capable of meeting standards in place when Jimmy Carter was President.

The AS-350 that crashed had a fuel tank that some critics suggested more closely resembled a big plastic milk jug than a sturdy fuel tank.

“I think that’s an excellent description of what it was. A flying milk jug,” said Ogborn.

Ogborn said the Repshers, in addition to paying eight-figure medical bills, plan on using the money from the settlement to raise the issue of helicopter safety on a national level.

“The 3 July 2015 accident in Frisco, Colorado, involving an H125 (AS-350) helicopter was an immense tragedy, and we at Airbus Helicopters were deeply saddened by it. We continue to offer our sincere condolences to everyone affected by this terrible event.

"The settlement with David Repsher and his wife reflects the serious and devastating nature of this accident, which Airbus Helicopters does not take lightly. Prior to this accident, Airbus Helicopters had already made or recommended a series of modifications to the H125 model to further enhance safety, and provided guidance notably on the dual hydraulic indicator system, and we have since implemented a series of additional safety improvements in an effort to prevent a similar accident from occurring and to further enhance the safety of the occupants.

"Safety remains at the core of all of Airbus’ activities and our most important priority. We are committed to delivering products that exceed industry safety standards, and to supporting flight safety for thousands of men and women around the world who are transported in our aircraft every day.”

“We continue to be inspired by the strength and courage of Dave Repsher and his family, and hope this resolution provides closure for everyone that was impacted by this accident.

"At Air Methods, safety is our highest priority, and we continue to raise the bar to ensure the safe return of our crews and patients to their loved ones. To that end, we have taken a number of proactive steps to improve crashworthiness protections in all of our aircraft, and have supported the implementation of stronger regulations, new legislation and industry-wide safety standards.

"As part of our commitment, we have received the first Airbus AS350 helicopter with the new, FAA-approved crash resistant fuel system (CRFS). Additionally, we are retrofitting our entire Airbus AS350 and EC130 fleet with the updated CRFS.

"Together with the entire Flight for Life and Frisco communities, we remain steadfast in our mission of providing lifesaving emergency air medical transport services to those in need. For us, it’s always been about doing the right thing.”

1 year since Flight for Life crash in Frisco

FAA manager would have problem flying most of country's helicopters