'They need to be seen to be believed': Body camera footage shows tasing of elderly Idaho Springs man

An attorney said Thursday she intends to file a lawsuit over the May 30 incident in which Michael Clark was injured. 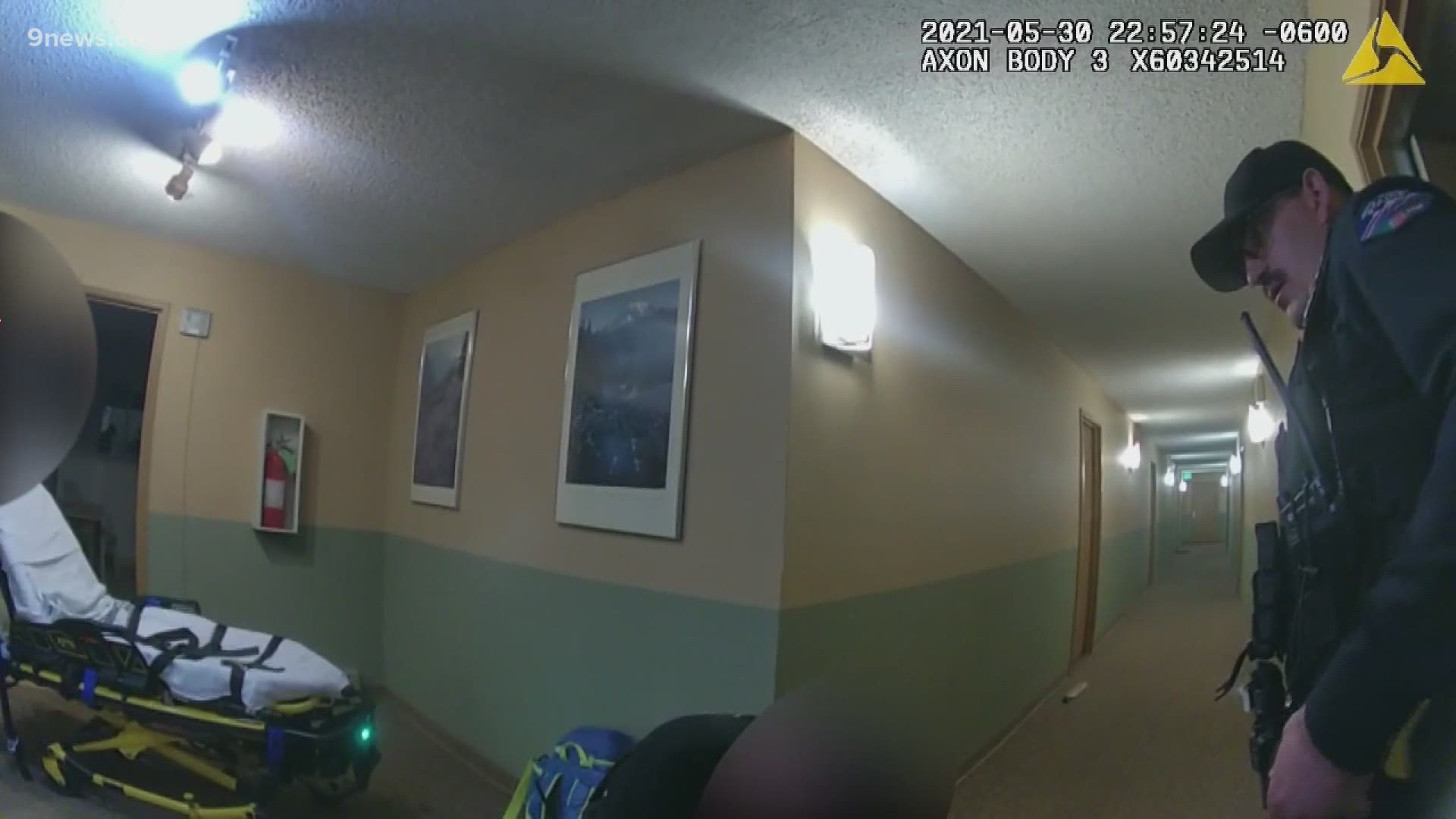 IDAHO SPRINGS, Colo. — An attorney representing a 75-year-old Idaho Springs man tased by an officer who was later fired and charged with assault said she intends to file a lawsuit over the May 30 incident.

Former officer Nicholas Hanning is charged with third-degree assault on an at-risk adult, according to the 5th Judicial District Attorney’s Office. Prosecutors said he voluntarily turned himself in on a warrant and was ordered to relinquish all of the weapons in his possession.

His charges stemmed from an incident that happened on May 30. According to prosecutors, Hanning and another officer named Ellie Summers were responding to a call regarding an alleged assault on a woman by her neighbor.

When officers contacted the suspect, who was described as a man in his 70s, he was holding a “sword-like weapon with what appeared to be teeth along both edges,” according to a news release from the district attorney’s office. Idaho Springs Police gave a similar description.

Attorney Sarah Schielke represents Michael Clark, the man who was tased, and obtained body camera footage of the incident that she said paints a very different account of what happened. Schielke said she was held in contempt of court on Thursday for releasing the body camera video before prosecutors. The judge had previously ordered prosecutors to release the video by July 29.  Schielke said she is confident she did nothing wrong or illegal.

“We knew it was going to be bad from the affidavit for Officer Hanning’s arrest," she said. "But that affidavit, it turns out, did no justice to the level of injustice seen on these videos. They need to be seen to be believed."

She said that the two officers banged on the 75-year-old man's apartment door, stormed inside, attacked him, returned to the hallway.

Body camera footage provided by Schiekle shows the offers banging on Clark's doors before he opens it and yells, "what do you want?"

There's quickly a physical confrontation with the officers yelling at Clark to "put it down."

It's hard to see whether he's holding something in the video, but he does turn and set something on top of a nearby dresser and then turns toward officers without anything in his hands, which are both clearly visible. The officers ordered him to get to the ground but refused, instead he began to explain that his neighbors hit the wall so hard, he thought they were going to come through the wall. Seconds later, the video shows, Clark being tased while the officers are several feet away.

Schiekle said he stood inside his apartment unarmed in just a pair of boxers when he was tased.

As he's dragged into the hallway, Summers said over the radio that Clark came out with a machete.

> The video below shows video from Summer's body camera. Viewer discretion is advised.

Clark lost consciousness and flew backward from the tasing, the video shows. His attorney said he struck his head on a dining room chair on the way down.

Clark was ultimately hospitalized with heart complications, and 36 hours later had a stroke, according to Schielke.

He was never charged with any crime.

"Finally being able to view the videos has been vindicating for this family on some level, since they confirm all that Mr. Clark has said, but, seeing the horrors that they contain, after fighting for so long to get them, has been traumatic in its own right. The tragic, needless abuse of this man in his own home cannot be unseen.

There have been a lot of tears and a lot of anger over these past few days as the family grieves and attempts to process all the perverse abuses of power seen on these videos.”

Clark has not watched the videos. He provided the following statement through his attorney.

Some people may wonder why I would be so set on the public release of these videos, when releasing them means that everyone I know is going to see me in my skivvies, stripped of my dignity, and assaulted in my own home.

But what the world will see in these videos is not me at my worst, but a police department at their worst. I am a patriot. I love my country. There are a number of good people out there, of good police officers. These are not them. People like this should not be police. What they took from me that day, I can’t put into words. I’m going to do whatever it takes with what little time I have left to stop this from happening to anyone else ever again.”

> The video below shows video from Hanning's body camera. Viewer discretion is advised.