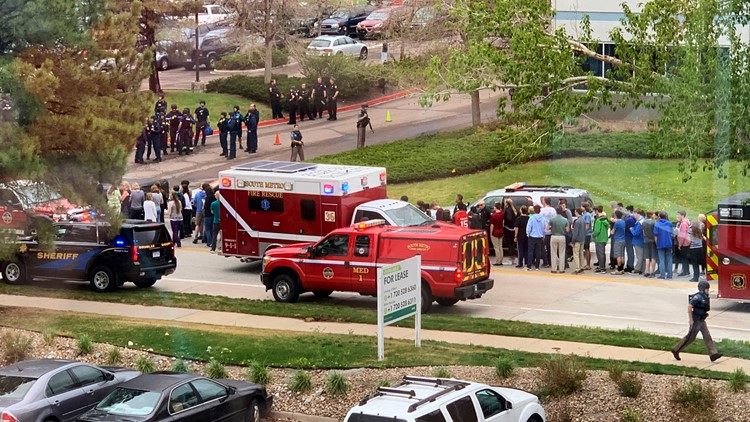 Photo by: AP
Police officers and students are seen outside STEM School Highlands Ranch, a charter middle school in the Denver suburb of Highlands Ranch, Colo., after a shooting Tuesday, May 7, 2019. (Courtney Harper via AP)

Detectives are also trying to determine whether it's possible a bullet from a private officer's gun hit one of the injured students.
Author: Kevin Vaughan, Anusha Roy
Published: 9:55 PM MDT May 8, 2019
Updated: 7:22 AM MDT May 9, 2019

HIGHLANDS RANCH, Colo. — Authorities are investigating a report that a private security officer at STEM School Highlands Ranch shot at a Douglas County sheriff’s deputy responding to Tuesday’s attack that left one student dead and eight others wounded, 9Wants to Know has confirmed with multiple law enforcement sources.

Investigators are also looking at the possibility a bullet from that security officer’s gun may have hit and wounded one of the students injured in the incident – a question that likely will not be answered until ballistics testing is complete, 9Wants to Know has learned.

“News to me,” said Grant Whitus, the owner of BOSS High Level Protection, the private security firm contracted to have an officer at the school.

Douglas County sheriff’s spokeswoman Cocha Heyden declined to comment, saying the attack on the school is an ongoing investigation.

One student, Kendrick Castillo, died after he and classmates rushed one of the two gunmen – both teenagers – who entered the school at 8773 S. Ridgeline Blvd shortly before 2 p.m. Tuesday.

The suspects were both identified by Douglas County Sheriff Tony Spurlock as students at the school, which has an enrollment of 1,850. Both were taken into custody, and both appeared in court Wednesday.

An 18-year-old student was advised that he was being held on suspicion of one count of first-degree murder after deliberation and 29 counts of attempted first-degree murder after deliberation. The other suspect is a juvenile. A decision on whether to charge that suspect as an adult will be made Friday, said George Brauchler, district attorney in the 18th Judicial District.

RELATED: Both suspects in STEM School Highlands Ranch shooting will be held without bond

Tuesday’s report of “shots fired in the school” brought an immediate response from multiple Douglas County deputies and command officers.

One of those deputies later reported the incident with the private security officers to investigators.

Whitus, who spent 26 years with the Jefferson County Sheriff’s Office before retiring in 2014, said that standard protocol requires that his security officer be questioned by authorities before discussing the incident with anyone at the company.

“I can’t talk to him until the sheriffs have talked to him,” Whitus told 9Wants to Know late Wednesday.