Companies post jobs where you can work anywhere - except for Colorado

A 9Wants to Know investigation found at least 10 companies may be avoiding hiring Coloradans to get around a new labor law. 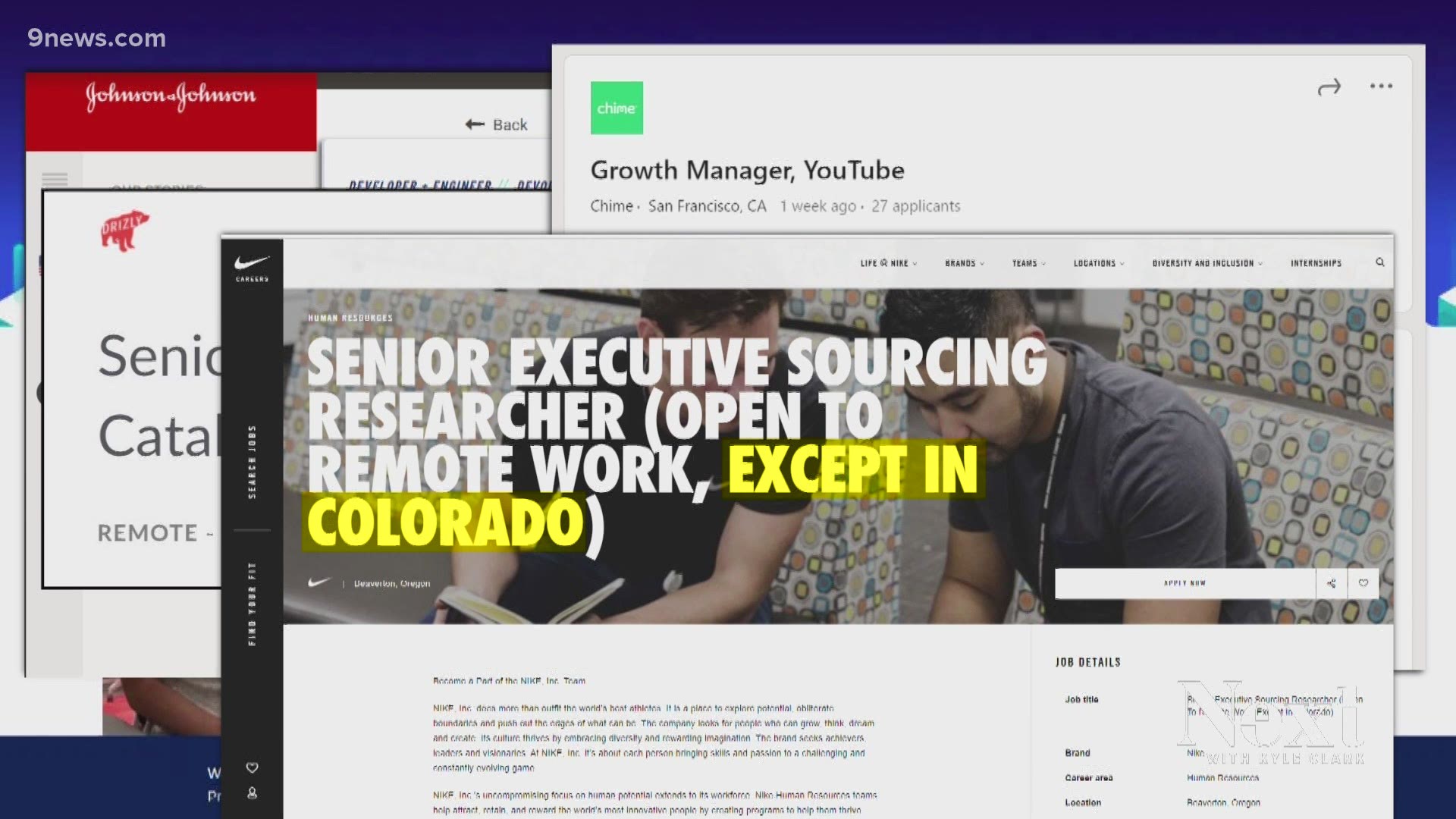 COLORADO, USA — Coloradans looking for work may be losing out on opportunities because companies will not hire them to possibly avoid complying with a law designed to fix pay inequities.

Colorado requires any employer with at least one employee in the state to post a salary range with a good faith floor and ceiling for what they are willing to pay. This is in response to the Equal Pay for Equal Work Act that became active this year.

9Wants to Know reviewed job postings for remote positions and found 10 companies said they would be receptive to hiring anyone in the United States - unless they live in Colorado.

“Open to remote work, except in Colorado,” a posting for a human resources job at Nike said.

Nike has not responded to our request for comment as of this publishing but said they will release a statement in the near future.

State Sen. Jessie Danielson (D - Wheat Ridge) said job advertisements like these fly in the face of the Equal Pay for Equal Work Act, which she sponsored.

“It looks to me like these companies are intentionally excluding potential employees right here in the state where we still need these jobs because they don't want to have to post their salary information,” Danielson said. “It's just wrong.”

She said increased transparency allows people to get paid more because they are fully aware of what is being offered. This helps people, especially women, advocate for themselves more effectively.

Businesses like Nike, Johnson & Johnson, and Lincoln Financial all had similar language on their applications. A recruiter for RapidSOS, a company that provides data services for emergency responders, explained in a screenshot obtained by 9Wants to Know that workers could not do their job from Colorado because of new policies in the state.

“...Colorado has different laws and regulations for remote work, which started in the beginning of this year,” the recruiter wrote.

RapidSOS did not respond to a request for comment.

Another business, a website and application hosting platform called DigitalOcean, initially said the position could be done remotely “but not in CO due to local CO job posting requirements.”

A spokesperson said they are changing their ways after 9NEWS reached out. The job posting no longer has that language in the posting.

“As a global company that hires across all 50 states and in multiple countries, we decided to put a short pause on posting jobs in Colorado as we assessed the impact of the new law,” Brenna Hogan, a spokesperson for DigitalOcean, wrote in an email. “We currently have employees in Colorado and will continue to hire in Colorado. We will be updating our job postings within the next week to comply with this new law.”

Hogan refused to answer any follow-up questions as to if that meant salary brackets would be going on the postings. As of Friday afternoon, that information was not there.

Scott Moss, the labor standards and statistics director for the Colorado Department of Labor and Employment (CDLE), said those companies are not breaking the law.

"If there's... no Colorado presence, no Colorado employees, they're beyond the jurisdiction of Colorado statutes, so they're not covered," Moss said.

Three other job postings reviewed by 9Wants to Know, including one from Google, did not have the salary range listed.

Moss said that is not allowed

"An employer must post the salary or a range of salaries for any job posting, and if it doesn't that would be a violation,” Moss said.

Moss said most companies are complying with the law. If they are not doing so, they usually fix the problem after being contacted by CDLE. The agency has the power to fine if there’s a “willful violation” or repeat issues with a company.

The agency has fielded 68 complaints so far. Of those, 48 are still pending a decision. Of the 20 with a decision:

Moss said anonymous tips can be considered, but that tipsters should make sure to include screengrabs and links to the postings. Otherwise, it’s difficult for CDLE to follow-up. Complaints can be filled out online and via this form.

CDLE compiled a fact sheet for companies unsure of how to be compliant under this law.

Aaron Batilo created a website, Colorado Excluded, to track these companies as well.

"It’s unfortunate that Colorado is going to be excluded,” Batilo said. “There's a lot of great talent here both in the tech sector and just more generally. I think that employees should have a right to know what they might be getting paid. There's a reason transparency is valued."

Batilo has tracked 36 listings at 33 companies as of Tuesday morning. Users can submit new postings on the website for him to verify before adding them to the list.

Send tips on this story, or any other topic, to investigative journalists Zack Newman and Marshall Zelinger.