'A tortured soul': Colorado family of John McAfee releases statement about his death

John McAfee died in a jail cell in Barcelona, Spain last month. His family released a statement about his death to 9Wants to Know. 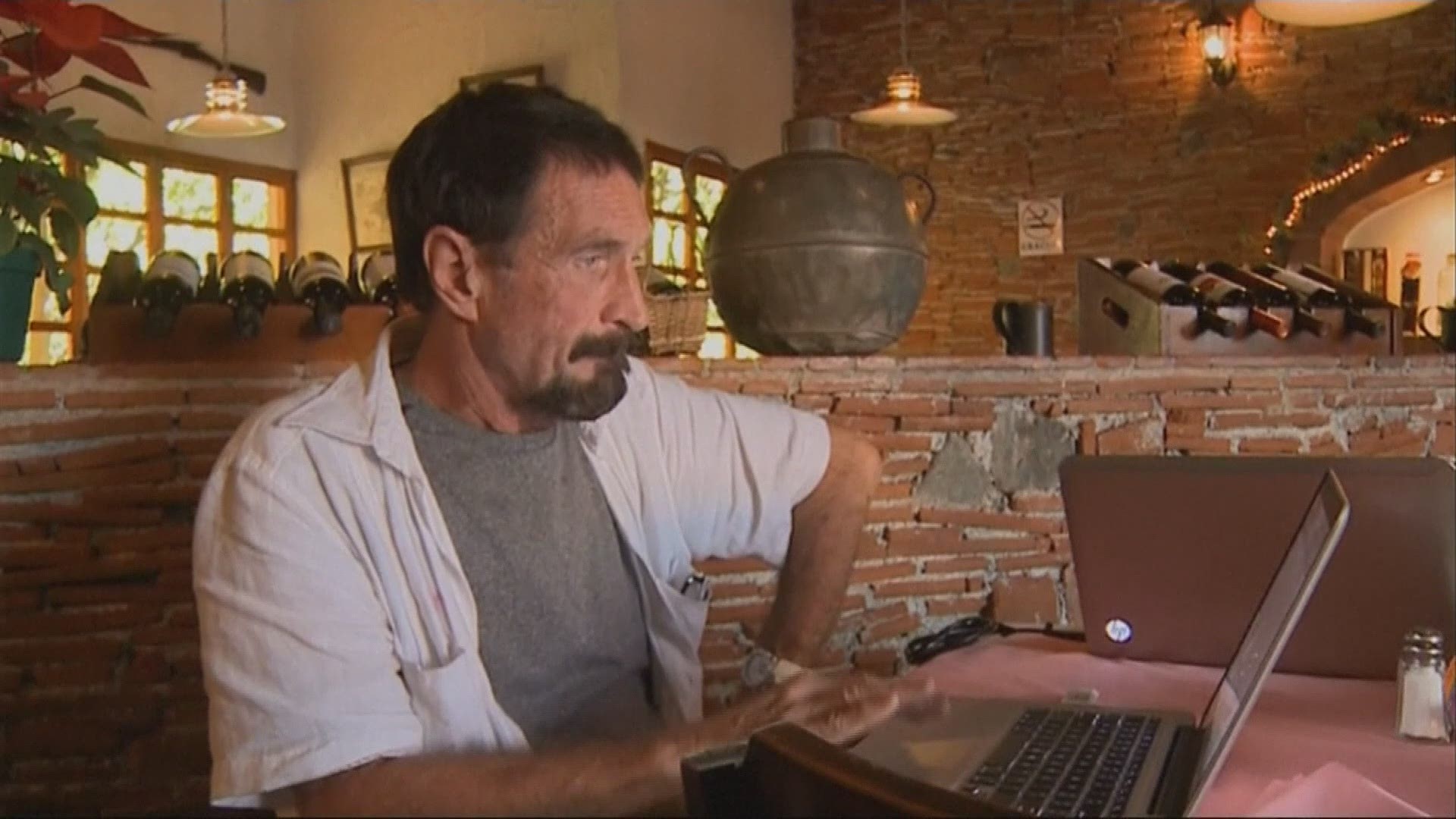 COLORADO, USA — The Colorado family of the famed creator of the McAfee antivirus software has released a statement about his death to 9Wants to Know, saying in part that he led a “deeply troubled life.”

John McAffee died in his jail cell near Barcelona, Spain last month. The entrepreneur and former Coloradoan faced tax charges in the U.S.

A Spanish court approved his extradition to face those charges just hours before his death, according to the Associated Press.

McAffee’s daughter and granddaughter who still live in Colorado released a statement to 9Wants to Know, and they asked their names not be made public because of the international interest in McAffee and his death. We verified their lineage through birth records.

We are terribly saddened by the sudden and unexpected news of John McAfee’s passing. He was undoubtedly a brilliant and talented man who lead a remarkable but deeply troubled life that affected many people...in both good and bad ways.

A tortured soul can manifest itself in many manners and there is no doubt that his energy was contagious.

Even though he may no longer be with us, his legacy will live on.

McAffee spent years in Colorado, and led the now-defunct company called Tribal Voice and owned a 280-acre yoga retreat, according to NBC News.

He sold his Colorado estate in Teller County and moved to Belize in 2008.

Family members wanted to show the private side of a man getting international attention for his very public life. They say they are his only immediate family and shared photos of his early life with them. Those photos are in the gallery below:

McAfee was arrested last October at Barcelona’s international airport and had been in jail since then, awaiting the outcome of extradition proceedings. The arrest followed charges the same month in Tennessee for evading taxes after failing to report income from promoting cryptocurrencies while he did consulting work, made speaking engagements and sold the rights to his life story for a documentary. The criminal charges carried a prison sentence of up to 30 years.

Nishay Sanan, the Chicago-based attorney defending him on those cases, said by phone that McAfee “will always be remembered as a fighter.”

“He tried to love this country but the U.S. government made his existence impossible,” Sanan said. “They tried to erase him, but they failed.”

The lawyer said Spanish authorities have not given his legal team a cause of death, and he wants to know if there were video cameras in McAfee’s cell or in the prison.

The U.S. Attorney’s Office in Memphis declined to comment.

Tennessee prosecutors had argued that McAfee owed the U.S. government $4,214,105 in taxes before fines or interests for undeclared income in the five fiscal years from 2014 to 2018, according to a Spanish court document seen by AP. But in this week’s ruling, the National Court judge agreed to extradite him only to face charges from 2016 to 2018.

Born in England's Gloucestershire in 1945 as John David McAfee, he started McAfee Associates in 1987 and led an eccentric life after selling his stake in the antivirus software company named after him in the early 1990s.

McAfee twice made long-shot runs for the U.S. presidency and was a participant in Libertarian Party presidential debates in 2016. He dabbled in yoga, ultralight aircraft and producing herbal medications.

In 2012 he was wanted for questioning in connection with the death of Gregory Viant Faull, who was shot to death in early November 2012 on the Belize island where the men lived.

McAfee told AP at the time that he was being persecuted by the Belizean government. Belizean police denied that, saying they were simply investigating a crime about which McAfee may have had information. Then-Prime Minister Dean Barrow expressed doubts about McAfee’s mental state, saying, “I don’t want to be unkind to the gentleman, but I believe he is extremely paranoid, even bonkers.”

A Florida court ordered McAfee in 2019 to pay $25 million to Faull’s estate in a wrongful death claim.

In July of that year he was released from detention in the Dominican Republic after he and five others were suspected of traveling on a yacht carrying high-caliber weapons, ammunition and military-style gear.

McAfee told Wired Magazine in 2012 that his father, a heavy drinker and “very unhappy man,” shot himself when McAfee was 15. “Every day I wake up with him,” he told Wired.

He lived for a time in Lexington, Tennessee, a rural town of about 7,800 some 100 miles (160 kilometers) east of Memphis. In a 2015 interview with WBBJ-TV, McAfee said he only felt comfortable when armed. The TV station reported that he chose to be interviewed with a loaded gun in each hand.

“Very little gives me a feeling of being safe and more secure other than being armed in my bedroom with the door locked,” McAfee told the station.

In one of his last known media interviews, with British newspaper The Independent last November, McAfee said his prison experience in Spain was a “fascinating adventure” and he planned never to return to the U.S.

“I am constantly amused and sometimes moved," he was quoted as saying. "The graffiti alone could fill a thousand-page thriller.”

He also told The Independent that prisoners and guards had recognized him and some asked for his autograph.

“These eight months John has spent in prison in Spain have been especially hard on his overall health both mentally and physically, as well as financially, but he is undeterred from continuing to speak truth to power,” it said.

California chipmaker Intel, which bought McAfee's company in 2011 for $7.68 billion, for a time sought to dissociate the brand from its controversial founder by folding it into its larger cybersecurity division. But the rebranding was short-lived, and Intel in 2016 spun out the cybersecurity unit into a new company called McAfee.

Jaime Le, a McAfee company spokesperson, said in a statement: “Although John McAfee founded the company, he has not been associated with our company in any capacity for over 25 years. That said, our thoughts go to his family and those close to him.”