Burke Ramsey filed a $750 million lawsuit Wednesday against CBS, a production company and seven investigators involved in a TV special that aired in September and accused him of killing his younger sister, JonBenet Ramsey, in Boulder in 1996. 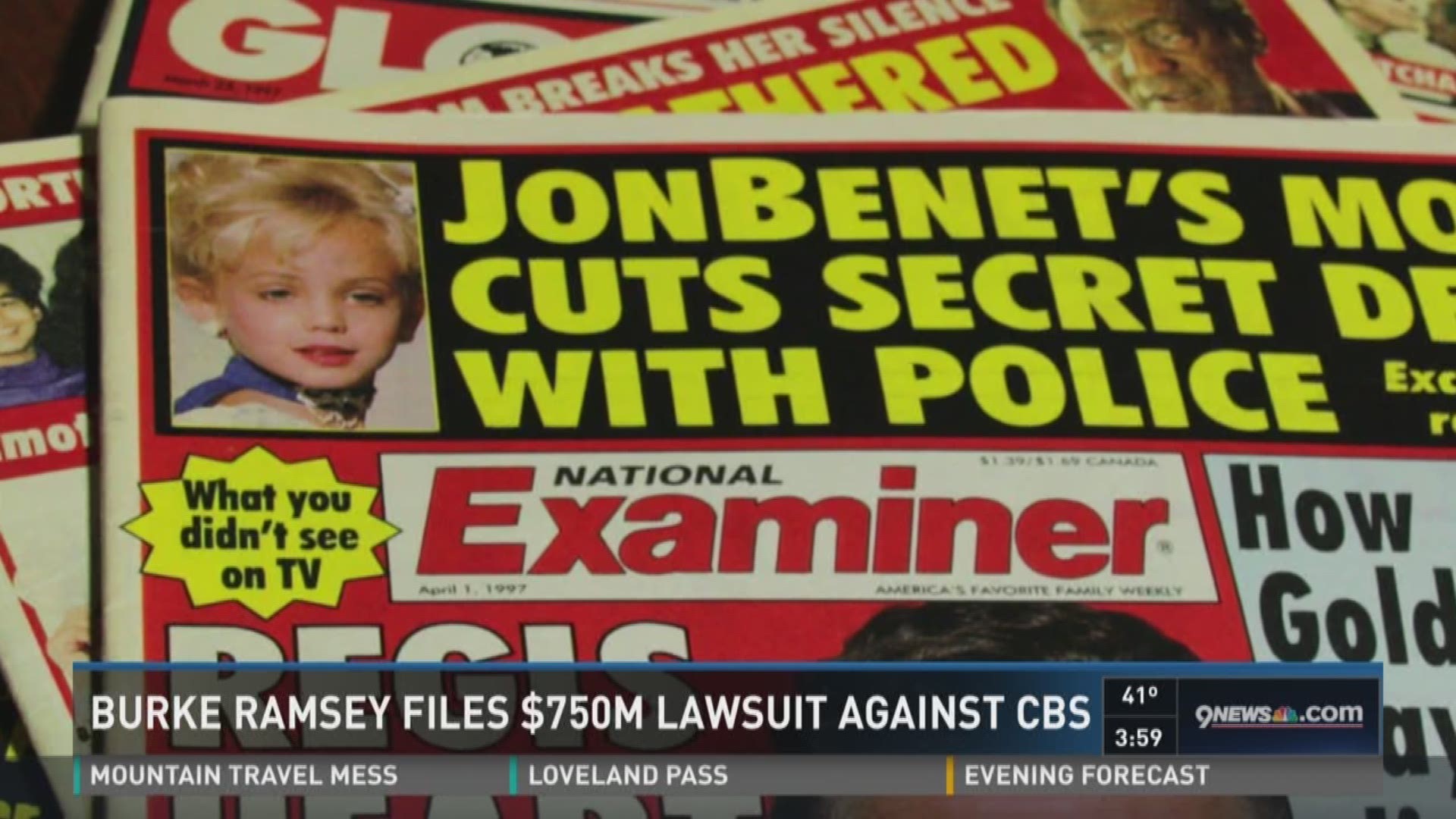 Burke Ramsey filed a $750 million lawsuit Wednesday against CBS, a production company and seven investigators involved in a TV special that aired in September and accused him of killing his younger sister, JonBenet Ramsey, in Boulder in 1996.

The filing of the defamation suit, a copy of which was obtained by 9Wants to Know, came two days after the 20th anniversary of the murder of the 6-year-old, a case that has captivated people for two decades and still remains unsolved.

The show in question, “The Case Of: JonBenet Ramsey,” aired Sept. 18 and 19. It included an elaborate recreation of the Ramsey home and a detailed look at evidence in the case by investigators with extensive law enforcement backgrounds, all of whom were named in the suit along with CBS Corp. and Critical Content, a production company.
The suit seeks $250 million in compensatory damages and $500 million in punitive damages.

PREVIOUS STORY: DNA in Doubt: A closer look at the JonBenet Ramsey case

PREVIOUS STORY: How touch DNA was used in the Ramsey case

According to a copy of the suit, Burke Ramsey filed it to “redress the permanent damage to his reputation resulting from defendants’ false accusation that he killed his sister, JonBenét Ramsey.”
Burke was 9 years old when JonBenet’s body was discovered in a basement storeroom of her family’s home on Dec. 26, 1996. She suffered a traumatic head injury and was strangled.

During the show, the experts theorized that Burke Ramsey, angry that JonBenet had stolen a piece of pineapple that he was eating as a late-night snack, bashed her in the head with a flashlight, fracturing her skull.

The suit was filed in Michigan. In addition to CBS Corp. and Critical Content LLC, it named the investigators involved in the show:

None of those defendants could immediately be reached for comment.

According to the suit, an estimated 10.4 million people watched the first part of “The Case Of: JonBenet Ramsey,” and another 8.24 million people tuned in the second night.

The suit accused CBS of promoting the special as a documentary, creating the expectation that it would include “a presentation of factual information about real people, places, and events that was truthful.”

“Burke Ramsey did not kill his sister and had no involvement in her brutal murder,” the suit asserted.

The suit noted that a number of officials involved in the investigation over the years had said that Burke Ramsey was not considered a suspect in the case.

“CBS perpetrated a fraud upon the public – instead of being a documentary based
on a new investigation by a so-called team of experts, ‘The Case of: JonBenét Ramsey’ was a
fictional crime show based primarily on a preconceived storyline scripted in a self-published and commercially unsuccessful book, Foreign Faction, written by defendant James Kolar and published in 2012,” Burke Ramsey’s attorneys wrote in the suit.

It is the second defamation suit filed by Burke Ramsey since the broadcast of the CBS special.

That suit was based not on the CBS special but on comments Spitz made during an interview with the CBS affiliate in Detroit on Sept. 19 suggesting that Burke Ramsey killed his younger sister.

According to the suit, during the interview Spitz said, “If you really, really use your free time to think about this case, you cannot come to a different conclusion.”

It also attributed other statements to him – “It’s the boy who did it, whether he was jealous, or mentally unfit or something,” and, “I don’t know the why, I’m not a psychiatrist, but what I am sure about is what I know about him, that is what happened here.”

The suit labeled Spitz “a publicity seeker with a history of interjecting himself in high profile cases in an effort to make money, exaggerate his resume and claim a level of expertise that he does not possess or deserve.”

The suit noted that in addition to the murder of JonBenet, Burke Ramsey had endured the deaths of his older sister, Beth, in a car crash in 1991 and his mother to cancer in 2006.

“Burke’s life has also for the past 20 years been lived under the cloud of years of false accusations against his parents and periodic media frenzies,” the suit alleges. “Now Defendant Spitz has attacked and permanently harmed the reputation of 29-year-old Burke Ramsey by describing him as a killer since age 9.”

Spitz’s attorneys have asserted that his statements were his opinion and protected by the First Amendment. They have filed a motion to have the suit dismissed.