Boulder police and prosecutors are planning a new round of DNA tests on key evidence in the unsolved 1996 murder of 6-year-old JonBenétRamsey, 9NEWS and the Boulder Daily Camera have learned. 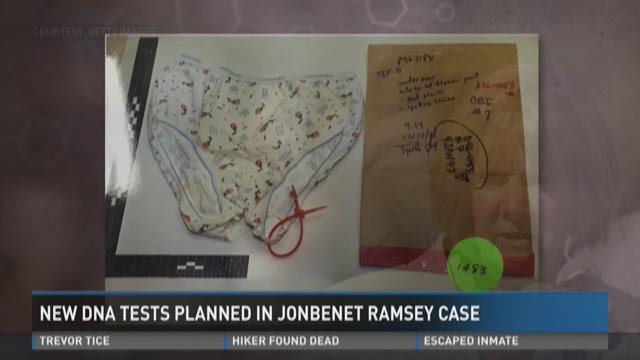 Boulder police and prosecutors are planning a new round of DNA tests on key evidence in the unsolved 1996 murder of 6-year-old JonBenétRamsey, 9NEWS and the Boulder Daily Camera have learned.

The move comes in the wake of a joint 9NEWS/Camera investigation that uncovered serious flaws in the interpretation of previous DNA testing on the panties and long johns the girl was wearing when she was killed late on Christmas night in 1996, or early the next morning.

RELATED: DNA in doubt: A closer look at the JonBenét Ramsey case 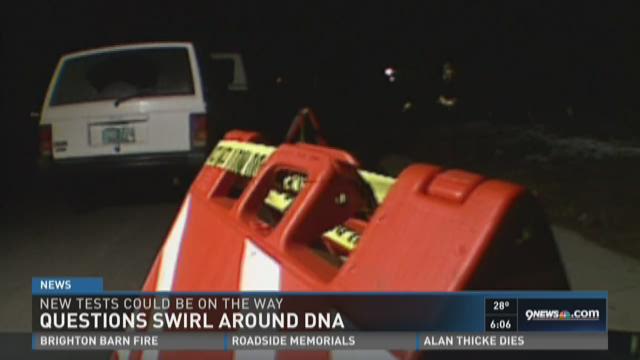 Boulder County District Attorney Stan Garnett and Boulder Police Chief Greg Testa both confirmed Tuesday that they and members of their staffs recently discussed the issue with Colorado Bureau of Investigation administrators, who are on the verge of unveiling new, more sophisticated DNA tests than their lab has ever used before.

"We did meet with CBI and the district attorney's office, and we had a general discussion about evidence in the Ramsey case, including new technology and DNA testing," Testa said. "And we are going to take a look at the new technology, and see how they may help us further this investigation."

"We should be doing all reasonable testing that we can do, and we will be," Garnett said.

The testing would be conducted with new, more sensitive "kits" required of crime labs by the FBI's Combined DNA Index System, the database that includes genetic profiles from more than 15.1 million known offenders and arrestees and more than 738,000 unsolved cases.

The 9NEWS/Camera investigation found that DNA evidence in the case doesn't support the controversial decision by former District Attorney Mary Lacy to clear the girl's family members from all suspicion in her death.

PHOTOS: The crime scene around the Ramsey home

1 / 9
These are stills taken from outside the Ramsey home the night after JonBenet's body was found.

The two news organizations obtained exclusive access to the test results, laboratory notes, reports and correspondence relating to testing conducted in 2008, at Lacy's request, by a forensic laboratory in Virginia then-known as Bode Technology.

Multiple forensic experts who examined that evidence on behalf of 9NEWS and the Camera disputed all of Lacy's conclusions with regard to the DNA.

For example, they determined that male DNA located in JonBenét's panties and in two spots on her long johns contained genetic material from at least two people in addition to the 6-year-old. As a result, they suggested that the "profile" entered into the FBI's CODIS database in 2003 — dubbed Unknown Male 1 by investigators in the case — may not be the profile of an individual at all, but a conglomeration of genetic material from multiple people.

At the same time, the experts disputed Lacy's conclusions that the genetic material in the long johns "matched" the DNA in the panties, that there was no innocent explanation for its presence on the girl's clothing, and that it therefore had to belong to the killer.

And 9Wants To Know and the Camera found that Lacy was told of the results' ambiguities before she issued her controversial letter on July 9, 2008, clearing JonBenét's parents,

John and Patsy, and her brother Burke of any suspicion in her murder.

DNA data base standards to change

Experts who reviewed the DNA evidence and emails between Lacy's office and Bode Technology were concerned that Lacy's approach showed signs of a phenomenon known as confirmation bias — an investigation tainted by a desire to reach a hoped-for result.

Lacy established herself as a strong supporter of the theory that an intruder killed JonBenét, dating back to her time as a chief deputy in the district attorney's office immediately following the murder.

As one example, then-DA's investigator Andy Horita wrote to the lab on March 12, 2008, that his bosses were "very excited" and "pleased" about the results that were being reported, and that "we're happy with what has been done and don't see the need for additional testing" unless strongly recommended by the lab.

An email one month earlier from Horita had alluded to the lab's assignment as an exercise "to validate the existing CODIS profile by eliminating point-of-manufacture controversies."

This, independent experts have said, runs contrary to the spirit of "double-blind" standards to which such testing should adhere.

Lacy, who left office in 2009 after serving two terms as Boulder's top prosecutor, has not responded to multiple requests for comment.

RELATED: DNA in doubt: What's next in JonBenét Ramsey case?

Phillip Danielson, a professor of molecular biology at the University of Denver and science adviser to the National Law Enforcement and Corrections Technology Center, said that new testing makes sense.

In 2017, the CODIS lab is going to begin requiring more sophisticated DNA tests that identify at least 20 individual points of comparison — as opposed to the standard of 13 required since 1997. All accredited DNA labs, including the one operated by the CBI, will have to use the new testing kits.

The testing done at Bode in 2008 was undertaken using a DNA kit known as Identifiler, which has the capability of identifying genetic markers at as many as 16 separate spots, known as loci. Thirteen of these loci comprise the FBI's core requirement for inclusion in the CODIS database

The now-contested sample from the Ramsey case that was entered into CODIS in December 2003 had the bare minimum of 10 loci, or genetic markers.

PHOTOS: A tour of the Ramsey house

1 / 18
KUSA file photo
The front of the Ramsey home makes it appear much smaller than it is. It is a massive home -- with 7,000-square-feet.

Danielson, one of the experts consulted by 9NEWS and the Camera, reiterated his belief that JonBenet's long johns and panties should be subjected to DNA testing called Y-
STR that identifies only male genetic material.

"I still think that the best thing they could probably do in the JonBenét case is figure how many males are on the long johns, and how many are in the underwear, 'cause that's sort of a key point," Danielson said. "And the way to do that is to focus on the Y chromosome and amplify that. If there's two males there, we'll see it. If there's one male there, we'll see it."

Another of the experts consulted by 9NEWS and the Camera, the University of Colorado's Christopher McKee, concurred.

"I think that as the original story showed, there is more to be tested, and more, I think, to be learned in this case — from both applying new technology, and also using the Y-STR technology or a new and better kit, to help shed some light on what it is we have here, on these evidentiary items in this case," McKee said.

He is a former public defender in both Atlanta and Washington, D.C., and now director of the Schaden Experiential Learning & Public Service Programs at the CU Law School.

McKee also teaches an advanced course on forensic science in the courts at the CU Law School, teaches on the subject around the country and has been recognized by courts and nationally as an expert on the topic.

CBI spokeswoman Susan Medina said Tuesday that the lab will go online early in January with testing kits knows as Yfiler Plus.

"Its greatest strength is that additional areas on the DNA will be tested," she stated in an email. "Over time, the results will be more individualizing to a specific male versus a family."

The murder of JonBenét roared into the national consciousness within days of the discovery of her body Dec. 26, 1996, in the sprawling Boulder home she shared with her parents and brother. The 6-year-old's skull was fractured by a blow to the head, and her killer cinched a garrote around her neck, placed duct tape over her mouth and bound her wrists.

Opinion among investigators and the public has split over whether the child might have been killed by a family member or by an intruder, and two decades later, the search for the truth continues.

It was revealed by the Camera in 2013 that John and Patsy Ramsey were both indicted in their daughter's death in October 1999, but then-District Attorney Alex Hunter declined to prosecute the case, believing there to be insufficient evidence to prove the case beyond a reasonable doubt.

Neither Testa nor Garnett would talk in detail about the next steps in the 20-year-old Ramsey investigation.

"We talked about so many things and they talked specifically about tests, and new technology, but I just don't feel like I'm qualified to even make a comment about the technology that they have, or what we're going to do in the future," Testa said.

"It's a very rapidly developing area of forensic investigation, and of course it's important for us that any of the evidence in the Ramsey case and any case is tested according to the most current and most updated methods."

Garnett said he saw no reason to use an outside lab.

"I'm confident that CBI can do what needs to be done at this time," he said.

The lab that performed the DNA testing told Lacy in March 2008 that it was "likely" the two samples found on JonBenét's long johns came from "more than two people" and "should not be considered a single-source profile," according to the documents obtained by 9NEWS and the Camera.

But in exonerating the Ramseys with a three-page letter made public July 9, 2008, Lacy failed to disclose any of that, writing that "the previously identified profile from the crotch of the underwear worn by JonBenét at the time of the murder matched the DNA recovered from the long johns."

The word "match" actually never appears in the reports from Bode Technology, which conducted the testing in March through June of 2008.

The only interview Lacy has given on the subject was to ABC News in October, where she offered a new justification for her exoneration letter. She said that during a walk-through in the Ramsey home in the days following the murder, she saw something she described as chilling, right outside the dead child's second-floor bedroom.

"It was a butt-print," Lacy told ABC News. "We all saw it. The entire area was undisturbed except for that place in the rug. Whoever did this sat outside of her room and waited until everyone was asleep, to kill her."

Garnett emphasized that he still does not see the Ramsey case as "a DNA case," as some have asserted.

"We should be doing all reasonable testing that we can do, and we will be, for all the reasons that you guys talked about in your previous report, and the changes in DNA testing," Garnett said.

"What I am confident about is that the Ramsey case is more than a DNA case, and to ever have a prosecutable case, we have to have several different parts of it come together. DNA would be a part of it. We need a number of other things as well."