Patrick Frazee is on trial for the murder of Woodland Park mom Kelsey Berreth. 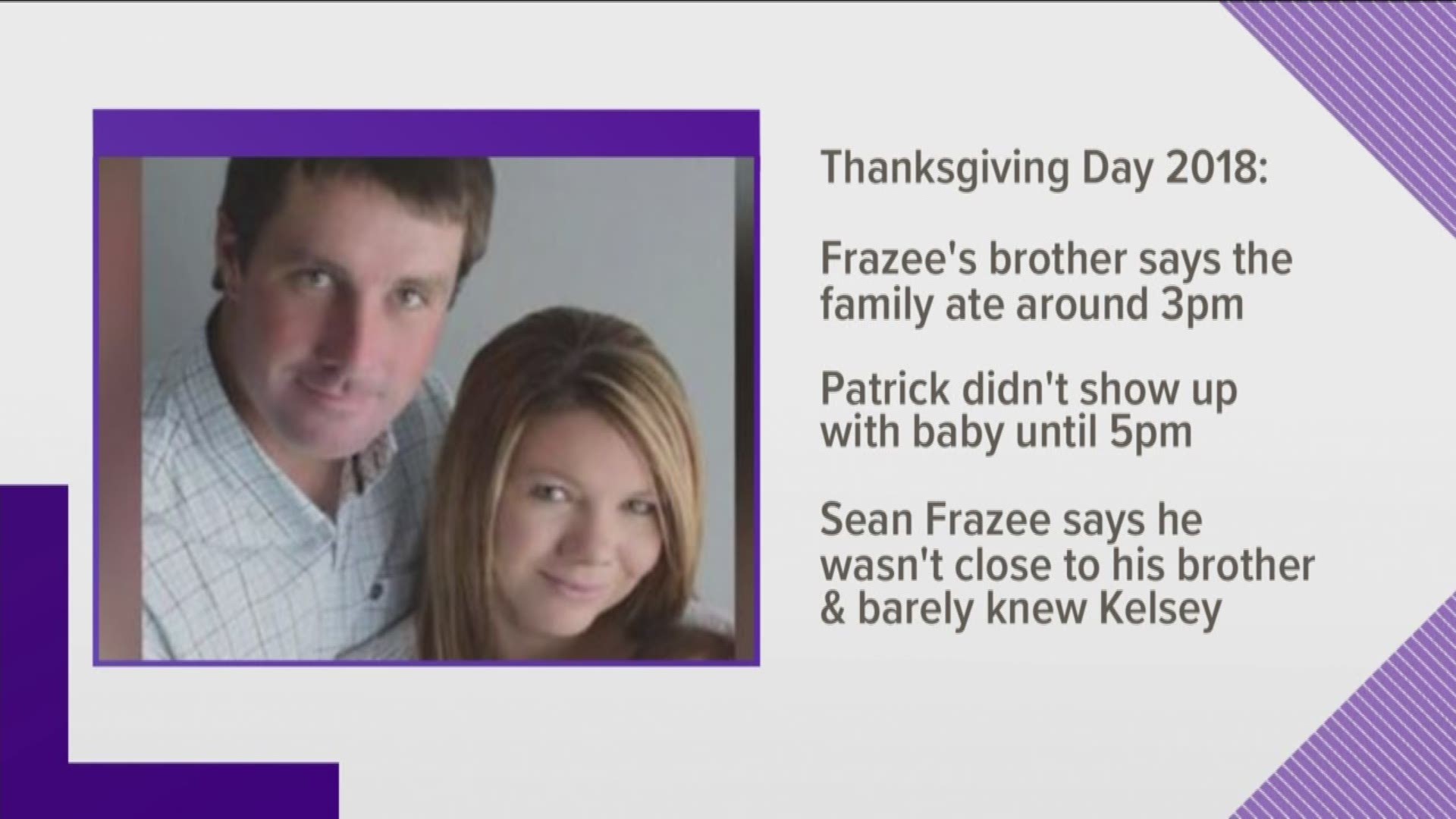 CRIPPLE CREEK, Colo — Prosecutors spent Tuesday morning building a nearly minute-by-minute timeline of what surveillance video shows Kelsey Berreth and the man suspected in her murder were doing on the last day she was seen alive.

That day was Nov. 22, 2018 — Thanksgiving. Kelsey Berreth wasn’t reported missing by her mother until Dec. 2, seven days after her cellphone last pinged near Gooding, Idaho on Nov. 25, 2018. Patrick Frazee, Berreth’s fiance, was arrested in late December and is now standing trial for first-degree murder, solicitation to commit first-degree murder and tampering with a deceased human body.

Berreth’s remains have not been found. 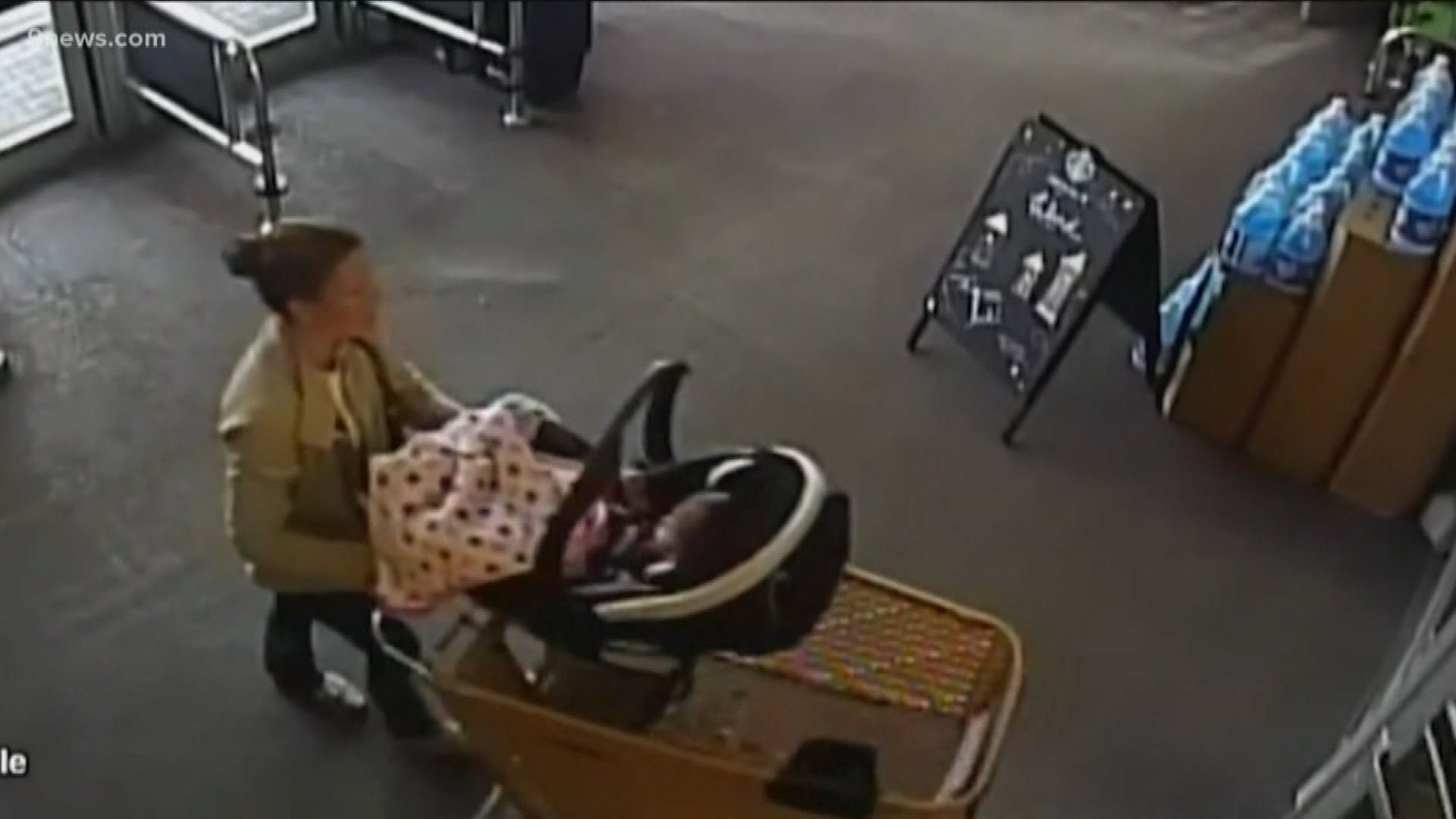 Following her disappearance, surveillance footage of Berreth inside a Woodland Park Safeway was distributed online, a move law enforcement hoped were images that would generate tips about where she was. In Division 11 of Teller County District Court, Fourth Judicial District Attorney’s Office Investigator Stephanie Courtney testified about that same video during the third day of Frazee’s trial.

RELATED: Officer describes 'lack of concern' from Kelsey Berreth's fiancé after her disappearance

At 12:02 p.m., she said it showed Berreth walking into Safeway with her young daughter in a baby carrier. In another piece of surveillance video, Berreth is seen lingering at the grocery store’s bread aisle. Just hours before, she had called her mother and asked for a bread dip recipe.

According to Courtney, Berreth left the Safeway at 12:27 p.m. In addition to the bread dip, receipts show she also purchased poinsettias.

At around noon, surveillance video outside a furniture store along US 24 in Woodland Park shows Berreth’s red Chevrolet Silverado truck headed back toward her home. Eight minutes later, Courtney said Frazee’s red Toyota Tacoma is visible going the opposite direction with a black tote in the bed.

Footage from the camera attached to the ATM at the ENT Credit Union shows Frazee pulling up at 12:42 p.m., according to Courtney. He spent eight minutes at the ATM. At 12:46 p.m., it snapped a photo of him looking at the machine with his baby daughter visible in the front seat.

Courtney said Frazee is next seen going into Walmart at 12:52 p.m. He left the parking lot at 1:13 p.m. Surveillance video from the furniture store shows Frazee’s truck headed toward Berreth’s condo at roughly 1:18 p.m.

Earlier in the day, Investigator Chad Mininger testified about footage collected from Berreth’s neighbor’s motion-activated security cameras. This footage, according to Mininger, showed Frazee outside of Berreth’s front door at around 1:23 p.m. Berreth is carrying roses, and a baby carrier was seen in photos shared in open court.

Credit: Courtesy Woodland Park Police Department
Patrick Frazee was seen in surveillance footage at the Walmart in Woodland Park after exchanging custody of his daughter with Kelsey Berreth.

Mininger said this was the last time Berreth would be seen in any surveillance photo obtained by law enforcement. According to Colorado Bureau of Investigation (CBI) Agent Chris Adams, the last Google search on her phone was at around 2:20 p.m. for sweet potato casserole. In the arrest affidavit, investigators said Berreth texted Frazee and asked if he wanted sweet potato casserole that morning.

At 4:20 p.m., Frazee is seen at the house once again holding the child. He’s also seen in surveillance footage at 4:24 p.m., 4:26 p.m., 4:27 p.m., 4:28 p.m., 4:29 p.m., and 4:30 p.m. During cross-examination, the defense attorneys pointed out that in the surveillance photos shown in court, Frazee isn’t seen with a black tote box. This piece of evidence is significant, since it is the container that prosecutors allege that Frazee used to store Berreth’s body after the murder occurred.

Courtney said Frazee was last seen in surveillance images at the furniture store headed toward Florissant from Berreth’s apartment at 4:34 p.m. She claimed that the tote box appeared to have moved in the bed of the truck, something the defense disputed during cross-examination.

The next piece of evidence about Frazee’s whereabouts came from his brother, Sean Frazee. He said that he had gone to his and Patrick Frazee’s mother’s home in Florissant for Thanksgiving, arriving at around 2:30 p.m. He said Patrick Frazee wasn’t there, and the family ate without him.

Sean Frazee said Patrick Frazee called their mother at 4:30 p.m. and said he was heading over. This is corroborated by cellphone records testified about by CBI Agent Gregg Slater — who said minutes later, Patrick Frazee also called a phone number in Idaho that was attached to a nurse named Krystal Lee Kenney.

Sean Frazee said he received a call from his brother on Dec. 3 where he said Berreth was missing, and that her mom was coming to Woodland Park to look for her. Sean Frazee claimed Patrick Frazee had told him he had broken up with Berreth, and that the two were sharing custody of their daughter.

During her testimony, Cheryl Berreth — Kelsey Berreth’s mom — said she had never heard that the two had broken up. She said during one of her last conversations with her daughter on Thanksgiving morning, Kelsey Berreth claimed she had been with Patrick Frazee at his ranch in Florissant and gone to buy him medicine at Walmart. Cheryl Berreth said her daughter didn’t get home until around 4 a.m. on Nov. 22.

According to Mininger, Kelsey Berreth was seen entering her apartment on her neighbor’s surveillance camera at 3:54 a.m. that morning. Adams testified that during the hours preceding this, Kelsey Berreth had Google searched information about what to do about digestive issues and stomach ulcers.

The surveillance video also shows that Patrick Frazee was at Kelsey Berreth’s apartment later than he had said: During interviews with police, he claimed that he had been there at roughly midday to exchange their child, and then left.

At the end of Tuesday's testimony, Slater said Patrick Frazee was paying Kelsey Berreth $700 a month in child support, but hadn't made a payment since July. This was not formalized with the courts, Slater said.

In addition, Slater claimed he found custody paperwork dated in August 2018 in Frazee's home that had not been filed.

Much of the narrative about the alleged crime hinges on the testimony of Kenney, a nurse from Idaho who claims she had been having an affair with Patrick Frazee. Kenney told investigators that he had asked her to kill Kelsey Berreth on three occasions, but she’s didn’t go through with it.

According to investigators, Kenney claimed that on Thanksgiving, she received a text from Frazee telling her that she had a “mess to clean up.” Kenney told police she drove to Colorado from Idaho and helped clean up the crime scene at Kelsey Berreth’s apartment and watched him burn her body at his property in Florissant.

Kenney has pleaded guilty to tampering with evidence after admitting to disposing of Kelsey Berreth’s cellphone. In exchange, she is expected to testify during the trial, but prosecutors have not publicly said when that will be.

The trial, which began with opening statements on Friday, is scheduled to last for three weeks.