Roofing company workers forced onto ground, held at gunpoint by man who thought they were antifa

Felony charges are possible in wake of the incident in a Loveland neighborhood. A victim was a CSU football player. 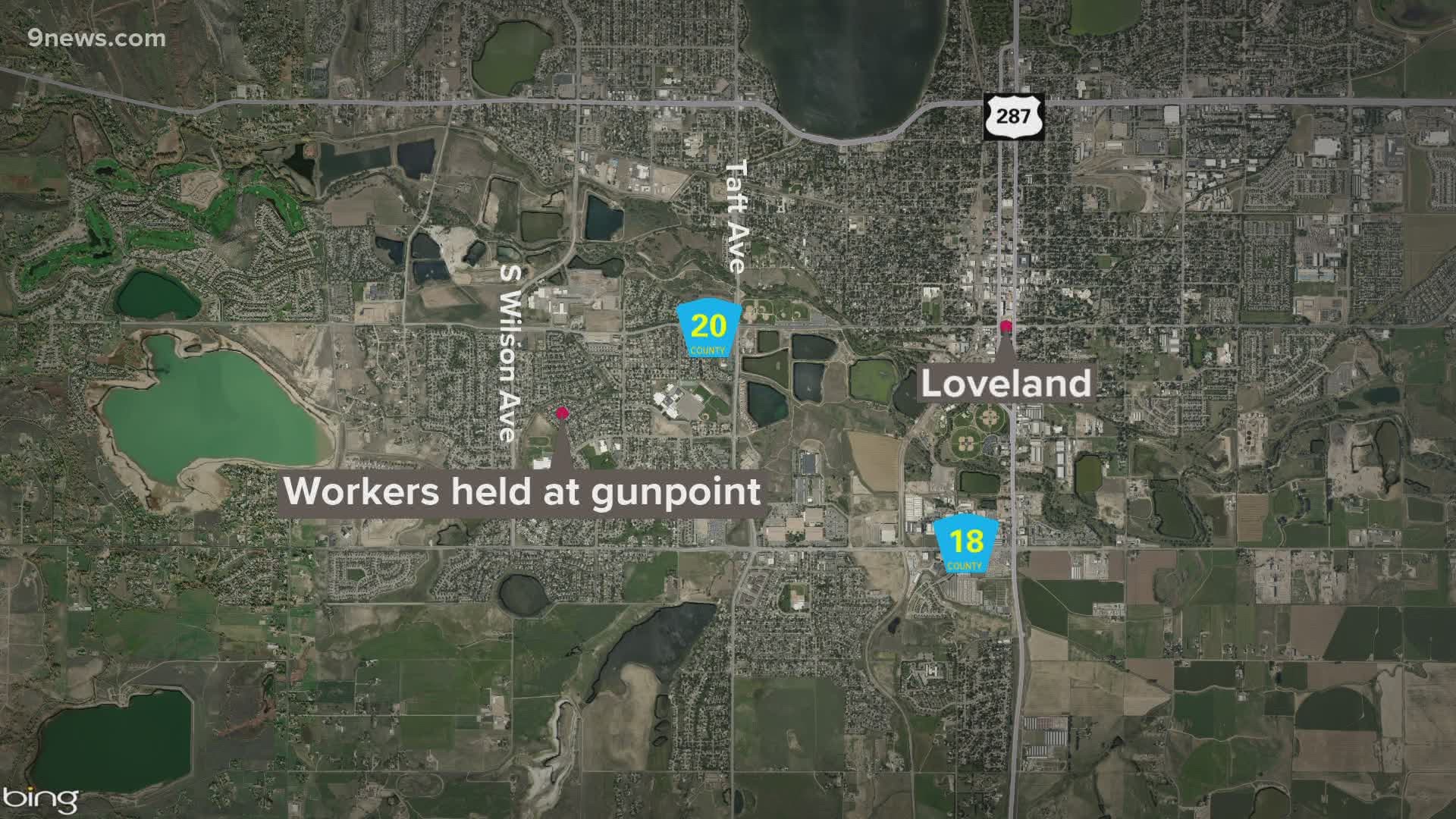 LOVELAND, Colo. — A Loveland man faces felony charges after allegedly concluding that two men going door-to-door in his neighborhood were members of the protest movement known as antifa – and then ordering them to the ground and holding them at gunpoint, 9Wants to Know has learned.

The incident unfolded after the man called police, said there were two men wearing masks near his home, and announced he was armed and going to go confront them, Loveland Police Lt. Bob Shaffer confirmed to 9Wants to Know.

When officers arrived in the 2400 block of Dawn Court around 6 p.m. Thursday, they encountered Scott Gudmundsen (pictured) – dressed in fatigues and holding two men on the ground at gunpoint, Shaffer said.

But the men weren’t troublemakers – they work for a local roofing company and were wearing blue polo shirts with the firm’s name on them, shorts, tennis shoes and white surgical-style masks, Shaffer said.

One of them is a Colorado State University football player who is 20 years old and works part-time at the roofing company. The student is a "man of color," according to a statement from the university.

The other man is 27 and an employee of the roofing company, 9Wants to Know has learned. 9NEWS is not identifying them at this point because they were described by police as victims of a crime.

RELATED: VERIFY: What do 'antifa' and 'boogaloo' mean?

RELATED: Officials blame 'outsiders' for violence as Trump says antifa to be labeled a terror group

“They were canvassing the neighborhood because of the recent hail storms,” Shaffer told 9Wants to Know.

There was no evidence that either of the men did anything wrong.

“Nothing at all,” Shaffer said.

At the scene, police arrested Gudmundsen, 65, who lives around the corner from where police encountered him.

Gudmundsen was armed with two weapons, Shaffer told 9Wants to Know: A Glock pistol, and a second Glock pistol that had been converted into a longer weapon that looked like a carbine rifle.

Shaffer said that Gudmundsen called police, said there were two “antifa guys” in the neighborhood and that, “I am going out there to confront them.” Gudmundsen told police in the call he was armed and wearing tactical gear, Shaffer said.

A second person also called police around the same time and said a man in fatigues was holding two people on the ground at gunpoint in the street.

President Trump has suggested that antifa agitators have been responsible for recent demonstrations across the country calling for greater police accountability in use-of-force incidents.

According to Larimer County Jail records, Gudmundsen was booked at 6:14 p.m. Thursday on suspicion of two counts of felony menacing and two counts of false imprisonment.

He is scheduled to be in court June 18. A man who said he was his son, Stanley Gudmundsen, emailed 9NEWS and said his father is ill and currently undergoing treatment at a mental health facility.

"Our sincerest thoughts go out to the two salesmen and we apologize to them and their families for the actions of our father and wish them well," he wrote.

As for the two men Scott Gudmundsen is accused of confronting, police called victim advocates to the scene to assist them.

“They were pretty rattled – both of them were,” Shaffer told 9Wants to Know.

In a statement issued Friday night, Chris Tulp, the CEO of Premier Roofing Company -- where the two victims work -- said he is hopeful the perpetrator "is punished to the fullest extent of the law."

"I have spoken to both teammates and they are understandably shaken," Tulp's statement reads. "I want to respect their space. With that said, we intend to stand up for the members of our team who are hard-working, honest, charitable, good people. We are proud of them and deeply saddened that they were subjected to this horrific incident and will stick-with and support them in any way necessary to ensure justice is served."

CSU sent the following letter to students on Friday night:

Last night in the course of performing duties associated with his summer job in Loveland, a CSU football student-athlete was threatened with a gun, forced to the ground, and held there—along with his co-worker—against his will. The perpetrator called the police to the scene; when they arrived, they quickly evaluated the situation and arrested the perpetrator.

Our student is a young man of color, while the perpetrator is white. Regardless of what investigators learn or reasons the perpetrator gives, we know this: Our student got up Thursday morning, worked out with his team, then showered, dressed, and went to work. Hours later, he was facing a stranger with a gun and hearing police sirens that had been inexplicably called on him. Given what we have seen happening in cities across this county, we know all too well that this encounter could have proceeded very differently.

Our students are all precious to us. This young man is precious to us, contributing to our campus community in many ways: as an athlete, as a leader, and as a thoughtful student. He is also precious to his family, to his friends and teammates, and to the many, many people out there in this world whose lives he has not yet touched but someday will. He is too precious to lose to hate and ignorance, as are all the people of color who bring their talents, their voices, their anger and anguish and hope and determination to CSU.

As a university and as a community, CSU is avowedly anti-racist and anti-violence. We are appalled at this expression of violence and hate visited upon one of our students. We condemn racism in all its forms and expressions and are working to build an equitable, anti-racist community that can be a model for others.