KUSA Alert Center
Live Video Breaking
News Weather Delays/
Closings
© 2020 KUSA-TV. All Rights Reserved.
How you could get a big medical bill from someone you've never even met
What's known as a "balance bill" could leave you with a bill where you're on the hook for paying your surgical assistant more than your doctor.
Author: Chris Vanderveen, Katie Wilcox
Published: 11:39 AM MST January 9, 2018
Updated: 11:43 AM MST January 9, 2018
MEDICAL-COST 5 Articles
CHAPTER 1
"I HAD NO IDEA HE WAS OUT OF NETWORK"
CHAPTER 2
HEALTH INSURANCE 101
CHAPTER 3
"NEVER HEARD OF HIM. NOTHING. NEVER MET HIM"
CHAPTER 4
"HELD HARMLESS"
CHAPTER 5
9 STATES PROHIBIT PROVIDERS FROM SENDING BALANCE BILLS

A “loophole” in a decade-old law has left Coloradans facing threats from collection agencies over medical bills they have zero obligation to pay.

Surprises are great ... but not so much when it comes to a bill for thousands of dollars from someone who you didn't even know gave you medical care.&nbsp;

The 2006 law was meant to protect patients who go to facilities that are covered by their insurance from getting high-priced, out of network bill. However, the law does nothing to prevent providers from skirting insurance providers and sending those bills directly to patients, according to an investigation by 9Wants to Know.

Adding even more confusion to a naturally opaque billing process, oftentimes the surprise, out-of-network bills arrive many months - if not years - after the medical procedure.

As one patient told 9Wants to Know, “Everybody is vulnerable.”

Kevin Fritz felt awful the afternoon of Sept. 21, 2016. A coworker wondered if it was a heart attack. Another decided he needed to go to the hospital.

“It looked like I took a shower with my clothes on. I was sweating that badly,” he said.

They quickly decided Sky Ridge Medical Center was his best option. Not only was it relatively close, but it was also in-network with his UnitedHealth insurance.

By the time his wife Juanita arrived, ER staff members were focusing not on his heart but his intestinal tract.

Kevin and Juanita Fritz found themselves on the hook for a $2,401.44 medical bill that, according to Colorado law, they didn't really owe.&nbsp;

“It turns out his intestines had twisted,” Juanita Fritz said.

It was a serious, potentially fatal, problem. Kevin needed an emergency surgery.

It likely saved his life.

Months later, the couple couldn't remember if anyone at the hospital told them the surgeon wasn't in-network with UnitedHealth, but the Fritz's did receive a bill indicating as much.

The bill came from South Denver Acute Surgery – a billing company that represents the surgeon.

UnitedHealth, according to the bill, had already paid the surgeon $1,712.56 for the claim.

Still, the billing company demanded an additional $2,401.44 for Dr. David Jones. It was, to put it bluntly, money the Fritz's did not have.

RELATED: Why an 'outrageous' $169,600 medical bill actually got paid

“I praise God that he was there to help my husband, but I had no idea that he was out-of-network,” Juanita said. “I'm unemployed. My husband is the only income right now. We're talking about one of his paychecks.”

The Fritz's received a surprise bill for $2,401 from an out-of-network provider that they didn't even know about.&nbsp;

And technically, according to Colorado law, it was also money they didn't really owe.

Dr. Jones did not respond to 9NEWS requests for comment.

The Fritz's are hardly the only patients to receive a surprise bill from an out-of-network provider.

A study published in the New England Journal of Medicine late last year concluded as many as 22 percent of ER visits to in-network facilities result in a surprise bill from a provider not in the patient's insurance network.

And it's not just ER visits that result in out-of-network, surprise bills.

Before we get deeper into this story, let's talk about some of the terms you might hear when dealing with health insurance and “balance bills.”

In-network provider: A medical provider that, through a contract, has a mutually agreed upon rate for certain procedures or products with your insurance carrier. 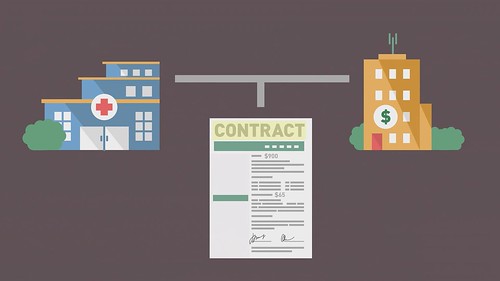 Out-of-network provider: A medical provider that, for a variety of reasons, does not have a contract with your insurance carrier. Many insurance plans place “out-of-network” charges into a separate pool when it comes to co-pays or deductibles. Lacking a contract with your insurance, there is no established, predetermined rate for procedures and/or products. 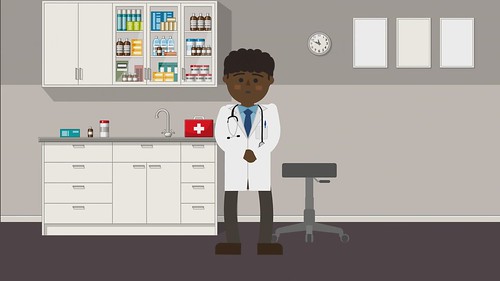 Deductible: Typically, the amount a patient owes before health insurance payments kick in. For example, a patient with a $3,000 deductible would be responsible, on an annual basis, to pay that amount before the patient's health insurance starts contributing.

Balance bill: Often referred to a surprise bill. For practical purposes, think of a balance bill as a bill in which the out-of-network provider sends you the balance of what was not paid for by your insurance company.

Held harmless: In health insurance circles, the term is meant to establish that, under certain circumstances, the patient is not to be held responsible for the outstanding bill. Twenty-one states, including Colorado, have laws that seek to hold patients harmless from balance billing practices, according to a study from the Commonwealth Fund.

Surprise bills are also known as balance bills because, many times, the provider seeking additional reimbursement sends the patient a bill directly for the “balance” of what wasn't paid by the patient's insurance company.

In Brenda Kellner's case, the bill came long after a pair of brain surgeries at a hospital in-network with her insurance in 2015.

Brenda Kellner found herself with a bill that owed her surgical assistant more than double what she paid her doctor. It's what's known as a balance bill, and it's not the kind of surprise anyone would consider good.

Keep in mind, the surgeon who did the actual surgery was in-network. So when Kellner's insurance paid him $4,100 not long after the surgery, he had a contractual obligation to accept it.

And so he did.

As it turns out, however, Ramirez was not in-network with Kellner's insurance, and thus under no contractual agreement to accept any payment.

So, were Kellner to pay him what he says he's now owed – he would be compensated more than double what the surgeon got.

PREVIOUS COVERAGE: These medical bills actually got bigger once insurance was involved

A balance bill is one where an out-of-network provider sends you the balance of what was not paid for by your insurance company.&nbsp;

And Kellner had never seen him – at least not while conscious.

“That's the thing that got me,” Kellner said. “I didn't even know this guy. Never heard of him. Nothing. Never met him.”

We understand the complexity of billing in healthcare and as is standard across the healthcare industry, we work with our patients on their bills, whether it's through negotiated rates with their insurance providers (which may vary from insurance plan to insurance plan), a discount, payment plan or other means.

In this case, human error was to blame. Mistakes can happen and that's why we always encourage patients with billing questions or concerns to contact us directly. We take these concerns very seriously and have communicated directly with this patient regarding their recent bill and the situation has been resolved.

In Colorado, it's not uncommon for surgical assistants to be out-of-network with many, if not all, insurance carriers.

And thanks to state law, it's not illegal or even improper for surgical assistants – or any other out-of-network providers for that matter – to routinely send balance bills to patients.

In 2006, Colorado legislators introduced and passed Senate Bill 213 in an effort to protect patients who go to in-network facilities from out-of-network charges.

In legal speak, it demanded certain patients be “held harmless” when facing balance bills after visiting a facility in-network with their insurance.

In other words, a patient would not need to pay the bills. His or her insurance company would need to deal with any remaining, unpaid balance.

Colorado is one of the states where patients have zero protections against receiving balance bills (even though they don't have to pay them).&nbsp;

There's just one big problem with the law as far as patient advocates are concerned: Nothing prevents a biller from sending a balance bill in the first place.

“There's nothing that prevents a provider from sending a bill directly to a consumer when that consumer legally does not owe it,” said Adam Fox, with the Colorado Consumer Health Initiative.

It all means that a patient – who may be unaware of the law but still entitled to the protections of it – can still receive a balance bill and may even be sued for not paying it.

“Oftentimes, if they don't collect on that bill they might send that person to collections,” Fox said.

“What other industry can you think of where somebody can bill you for money you don't owe and send you to collections?” Fox added. “They're basically trying to collect money from somebody who doesn't owe it.”

Unaware of the very law that could hold them “harmless,” they arrived inside the Arapahoe County courthouse a few months ago, desperate to come up with a solution to their $2,401.44 bill.

At the time, thanks to interest and court fees, the total amount they were being sued for was in excess of $2,700.

Inside the courthouse, an attorney representing “Credit Systems, Inc.” refused to negotiate.

That day, once informed by 9Wants to Know of the law, the Fritz's filed a complaint with the Colorado Division of Insurance.

Weeks later, the state of Colorado would determine to hold Kevin Fritz “harmless.”

What it meant in this case was that the Fritz's had to pay the copay required by their insurance, and the insurance provider and the surgeon worked out the rest of the bill. 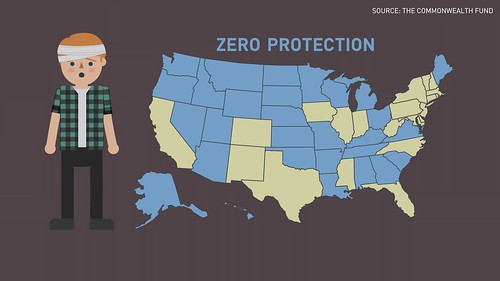 According to a recent study by the Commonwealth Fund, only nine states limit providers from sending balance bills to patients.

Colorado is not one of those nine states.

“As the law (in Colorado) is written right now, there really is no responsibility on behalf of the provider,” consumer protection attorney Sarah McEahern said.

There are some things you can do to make sure you aren't on the hook for surprise medical bills worth thousands of dollars.&nbsp;

“And anywhere along the way, one of those bills might be out-of-network,” she added.

She said it never hurts to ask any facility if it does work with out-of-network providers.

Here is some other advice:

- Check your Explanation of Benefits. The EOBs will detail who was paid what and for what service. They will also tell you if there is the potential of a balance remaining on an out-of-network charge.

- Check your insurance card. If you see “DOI”, “C-DOI” or a variation of the two on it, you are fully entitled to protection under the state's balance billing law.

- Complain to the Colorado Division of Insurance if you believe you've been improperly balance billed.

- Ask your insurance company to take another look at the claim

If you believe you've been improperly balance billed and would like to share your story, please send an email to our ongoing “Show Us Your Bills” investigation at showusyourbills@9news.com.