Editor’s note: the video included in this story is difficult to watch and may not be suitable for all viewers. 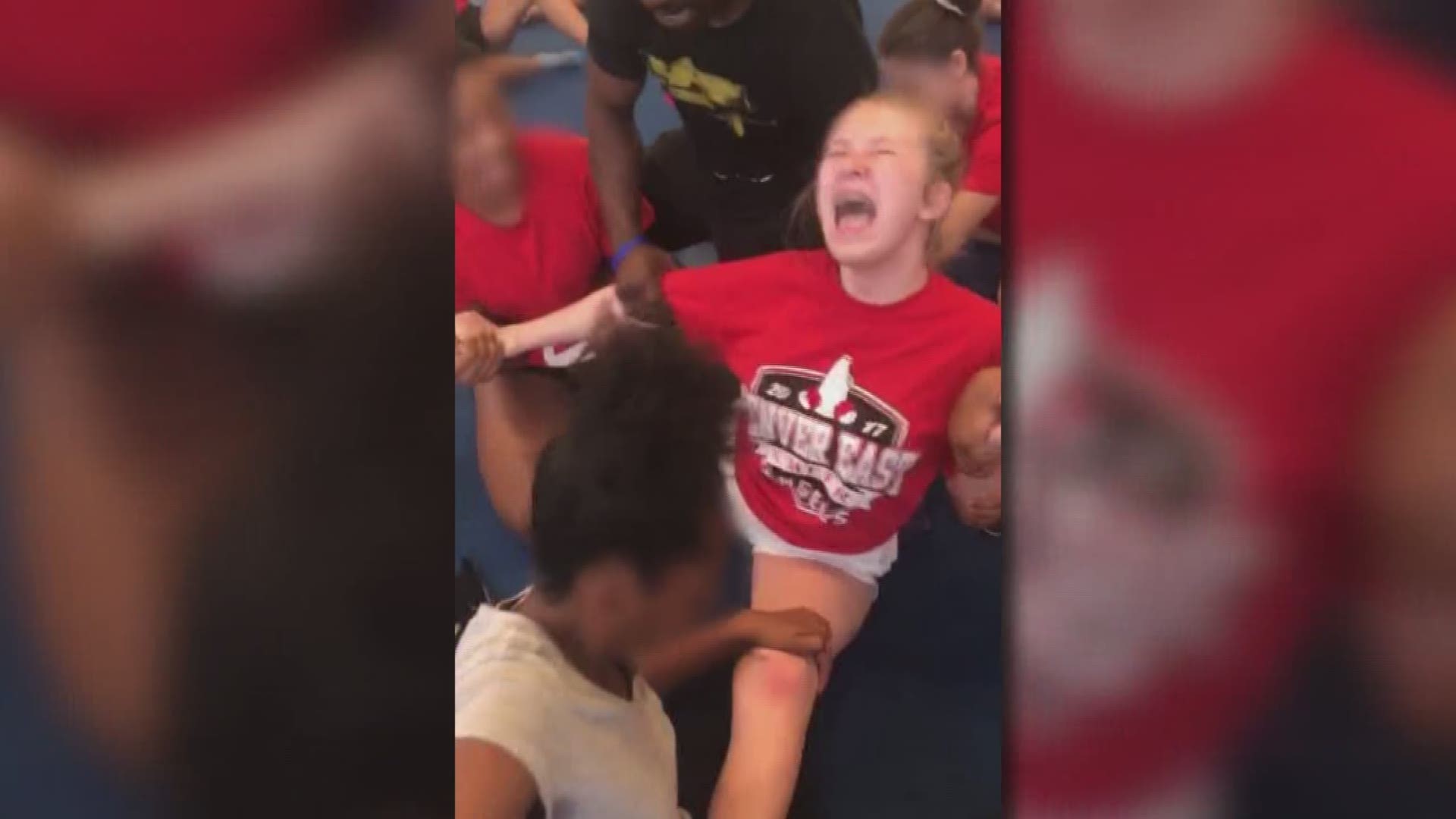 Editor’s note: the video included in this story is difficult to watch and may not be suitable for all viewers.

During the first week of cheer camp for East High School in June, Ally Wakefield, an incoming freshman was surrounded by new teammates, and forced, by the recently hired cheer coach, into an extended split position.

In videos obtained by 9Wants to Know, eight cheerleaders are shown repeatedly being pushed down into the forced splits, while their arms are held up by fellow teammates, making each cheerleader unable to move herself out of the position.

All cry out in pain. Ally Wakefield asked her coach, 9 times in less than 24 seconds to “please, stop.”

All the while, coach Ozell Williams is shown holding down each girl’s shoulders, and pushing them down further.

This video is difficult to watch and may not be suitable for all viewers. 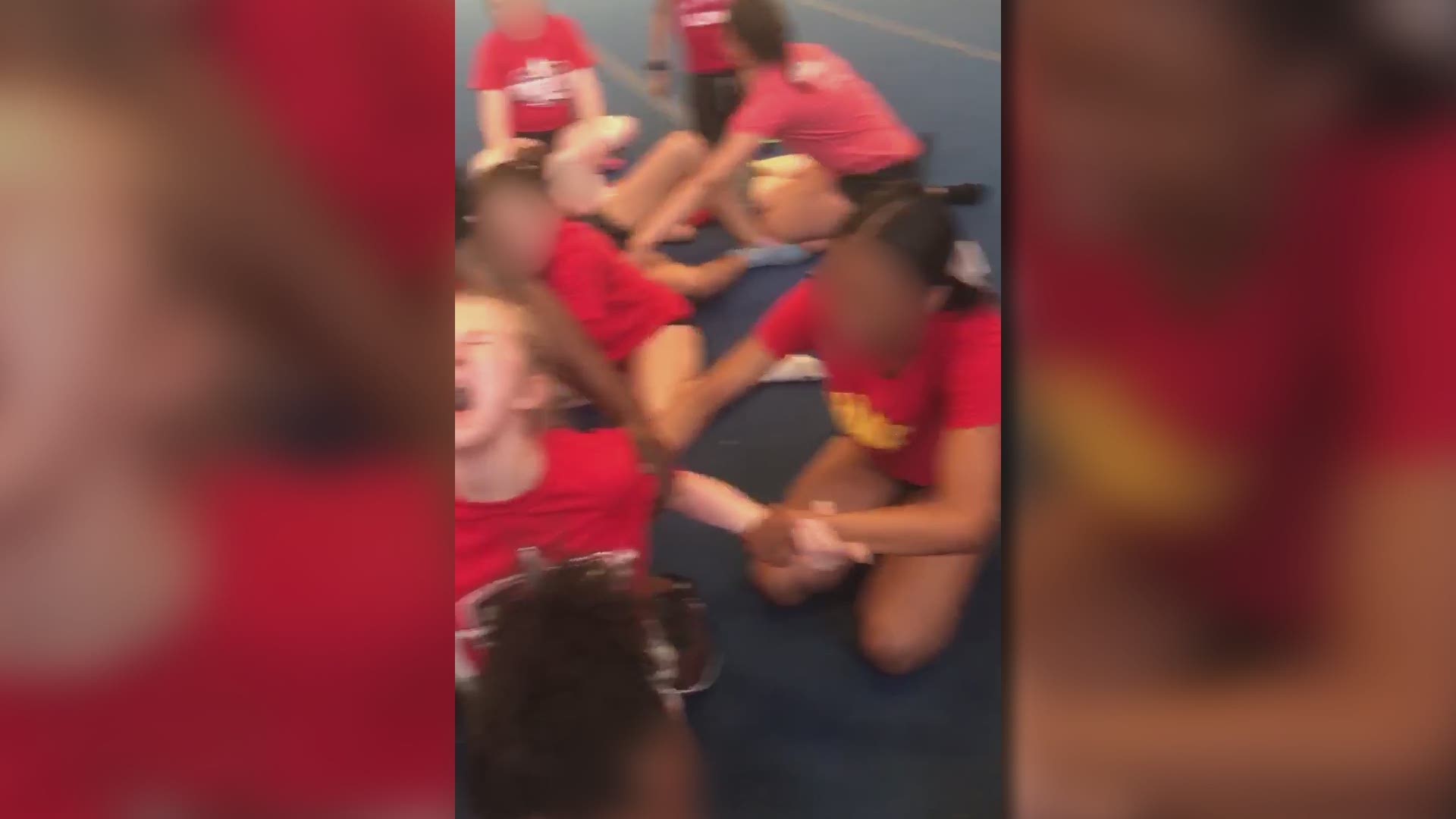 Editor’s note: 9Wants to Know is not publishing all of the videos due to privacy concerns.

9NEWS is identifying those minors who agreed to on-the-record interviews while accompanied by their parents.

You may recognize that coach in the video. He has become a known figure for his backflips down the field during Broncos and CU football games.

This year would have been his first year coaching for the East High School cheer team, but he was placed on leave during the first week of school.

The videos, shot on a cell phone by two of the cheer team members, were sent anonymously to 9Wants to Know in August.

However, school administrators have had access to at least one video since June.

“I have attached a video of the forced splits she and her other team members were forced to do at cheerleading camp and practices; unless they had a doctor's note. This is how Ally injured her leg,” Wakefield said in the June 15 email addressed to East High School Athletic Director, Lisa Porter.

“My husband and I would like to know what the administration is going to do about my daughter's injury and how it happened,” the email continued, in part.

That’s a question Kirsten Wakefield and other parents are still asking.

Anna does not appear in any of the videos obtained by 9Wants to Know, but says that she was also forced into the splits in the same manner, as were additional teammates. She showed her mother a video of her teammate.

“That made me sick to my stomach,” Nickolay said. “I don’t know how you could justify that.”

“If I was to be personally present and witness to an approach to get a young girl to do the splits in that fashion, I would have stopped it,” said Cameron MacDonald, associate professor of physical therapy at Regis University. “I know from myself as a physical therapist that is not the approach I would take.”

Parents have, for months, launched complaints towards the school administrators and the coach himself. On August 22, 9NEWS requested numerous records related to those complaints and the cheer team from East High School. On August 23, Denver police launched their investigation.

Denver police released the following statement on the incident Thursday:

On August 23, 2017, the Denver Police Department received anonymous information regarding the incidents involving a cheerleader coach at East High School, and Denver Police child abuse detectives immediately began an investigation. This is an open case, therefore no additional details or videos will be provided at this time.

Earlier today, I became aware of an exercise used at cheer practices this summer at East High School. We immediately began taking steps to investigate this issue, and our Department of Safety is supporting Denver Police in this effort. In order to conduct a fair and thorough investigation, we have placed East Principal Andy Mendelsberg, East Assistant Principal Lisa Porter, East Cheer Coach Ozell Williams, East Assistant Cheer Coach Mariah Cladis and DPS Deputy General Counsel Michael Hickman on leave. This is standard practice in an investigation of this type. It does not imply or prejudge in any way the actions of the individuals or what the investigation might determine. Please know that we will share the results of the investigation as soon as possible. I want to reiterate in no uncertain terms our commitment to the safety of our students. We absolutely prohibit any practices that place our students’ physical and mental health in jeopardy. We do not and will not allow any situation in which a student is forced to perform an activity or exercise beyond the point at which they express their desire to stop. While this investigation is ongoing, we are entirely focused on ensuring our students and staff at East are receiving the supports they need. A senior leader at the school, East Assistant Principal Jason Maclin, will serve as interim principal during this time and we are providing additional counseling for our students and families. With regards to certain videos, I cannot state strongly enough – as the superintendent of the school district and as the father of two high school-aged daughters -- that the images and actions depicted are extremely distressing and absolutely contrary to our core values as a public school community.

This is an ongoing investigation and will be updated as more information is made available.