Jake Patterson sentenced to life in prison without parole for kidnapping Jayme Closs, murdering her parents

"There are some things that Jake Patterson can never take from me," Jayme Closs said in a statement that was read to the court. "He can't take my freedom." 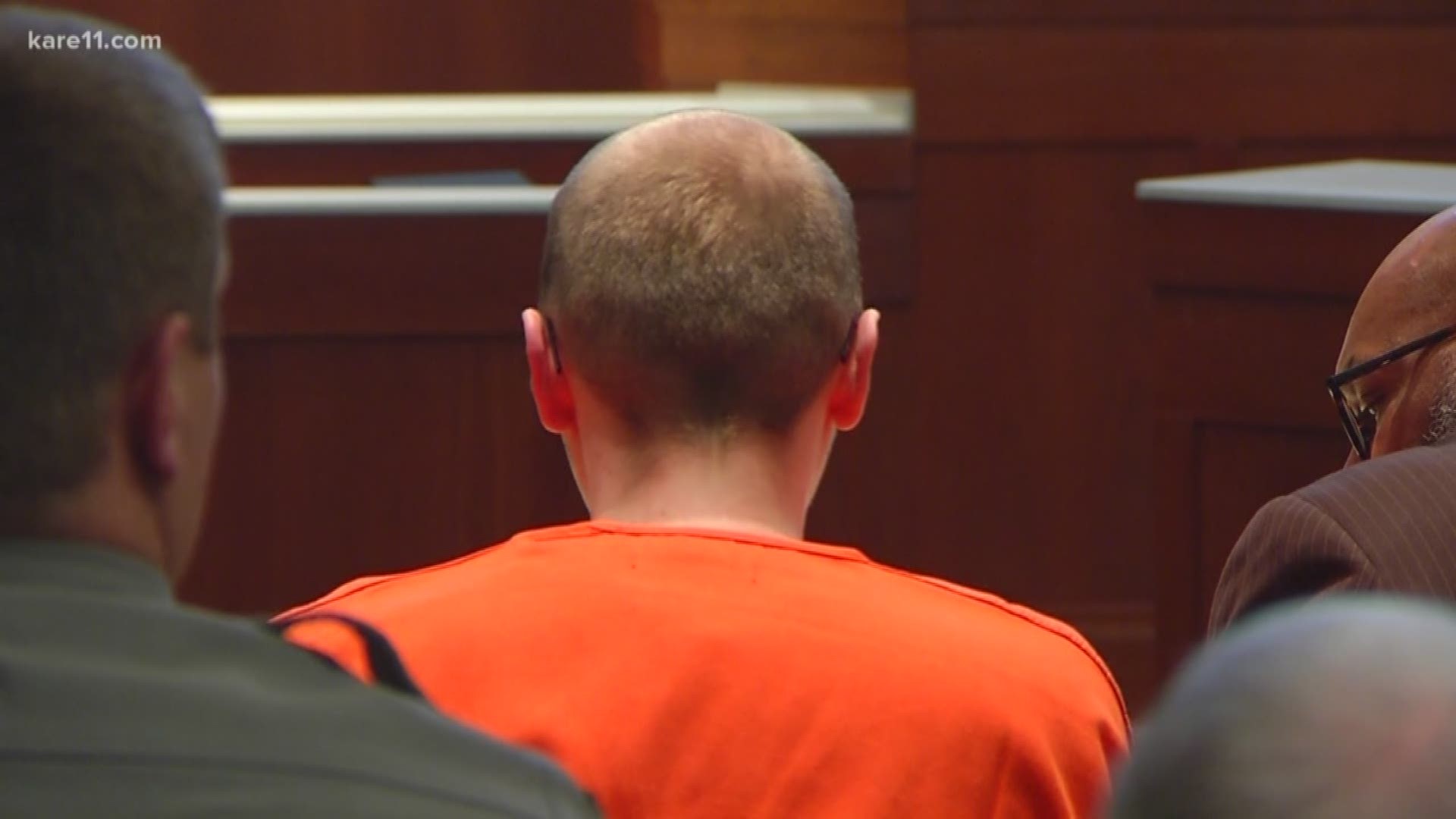 The man who pleaded guilty to kidnapping Wisconsin 13-year-old Jayme Closs and murdering her parents has been sentenced to life in prison without the possibility of parole.

The judge handed down the sentence after hearing statements from the Closs family, the prosecution, the defense, Jake Patterson, and Jayme Closs herself. There was no question that Patterson would receive life in prison, but the judge had to decide Friday in Barron County court whether he would ever be eligible for parole, after hearing from the people affected by his crimes.

"There are some things that Jake Patterson can never take from me," Jayme said in a statement that was read to the court. "He can't take my freedom. He thought that he could own me but he was wrong. I was smarter. I watched his routine and I took back my freedom. I will always have my freedom and he will not." 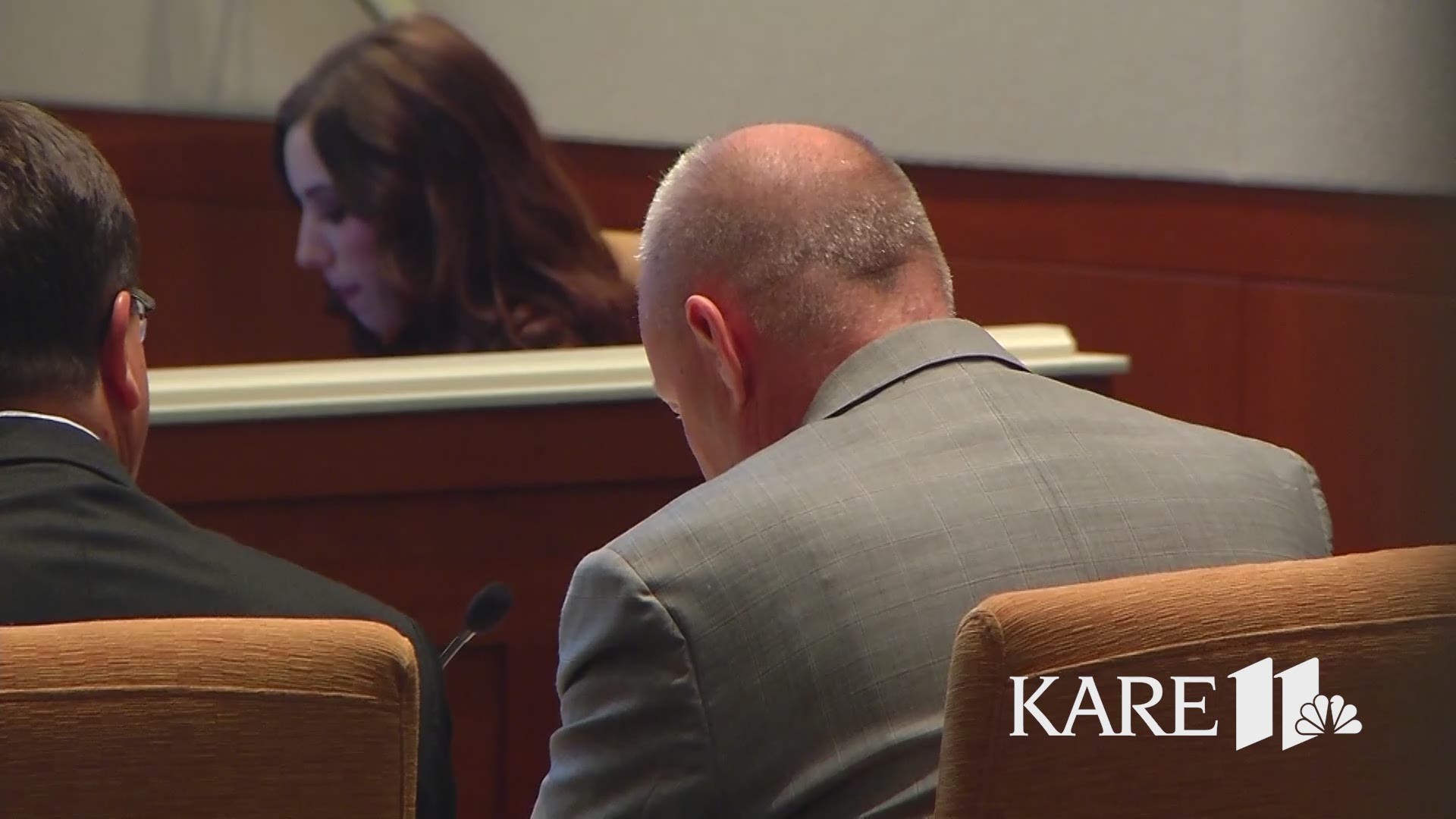 Patterson pleaded guilty on March 27 to the murders of James and Denise Closs and the kidnapping of Jayme.

Ahead of handing down the sentence, Judge James Babler said to the families, "I wish that the justice system could make you whole again. I wish we could go back in time to make sure that James and Denise Closs were never murdered nor Ms. Closs kidnapped. But I and the system can't do that for you. At best it is my hope that today's hearing will bring you a bit of closure to this awful nightmare and perhaps some return to a sense of safety and security." 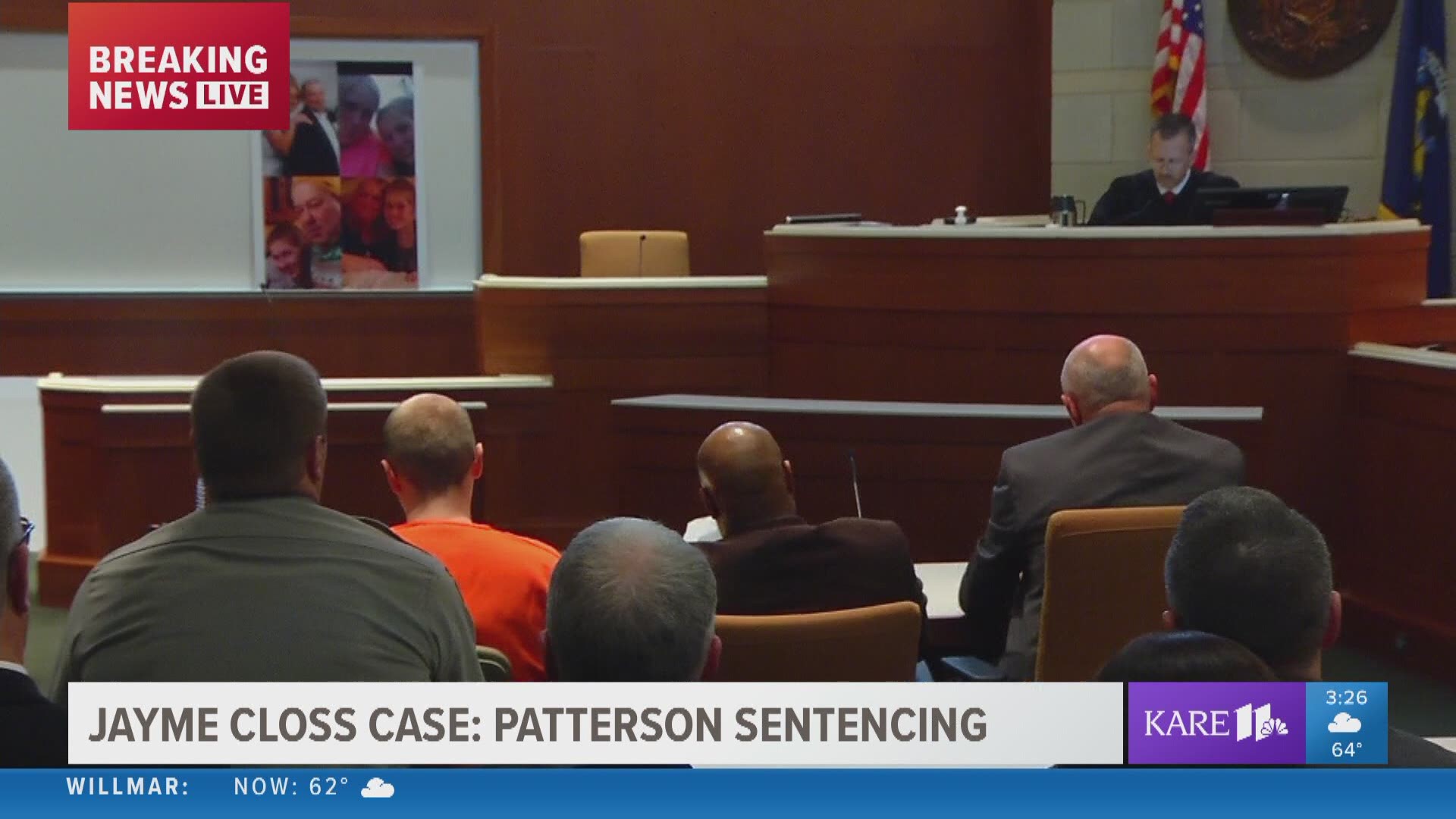 He said the overriding factor in his decision was the safety of the public. "You are the embodiment of evil," he said to Jake Patterson. "You are one of the most dangerous men to ever walk on this planet."

The judge sentenced Patterson to two life sentences in prison without the possibility of parole for the murders of James and Denise Closs, and the maximum sentence of 40 years for the kidnapping of Jayme Closs, all to be served consecutively.

Five months after escaping from her 88 days in captivity, Jayme had some words for the man who kidnapped her and killed her parents.

"Last October Jake Patterson took a lot of things that I love away from me," the statement read. "It makes me the most sad that he took away my mom and my dad. I loved my mom and dad very much and they loved me very much. They did all they could to make me happy and protect me."

Jayme described how she has to have an alarm on the house now, just to go to sleep. She said Patterson took away her love for dance, school, and going out with her friends. But he didn't take everything. 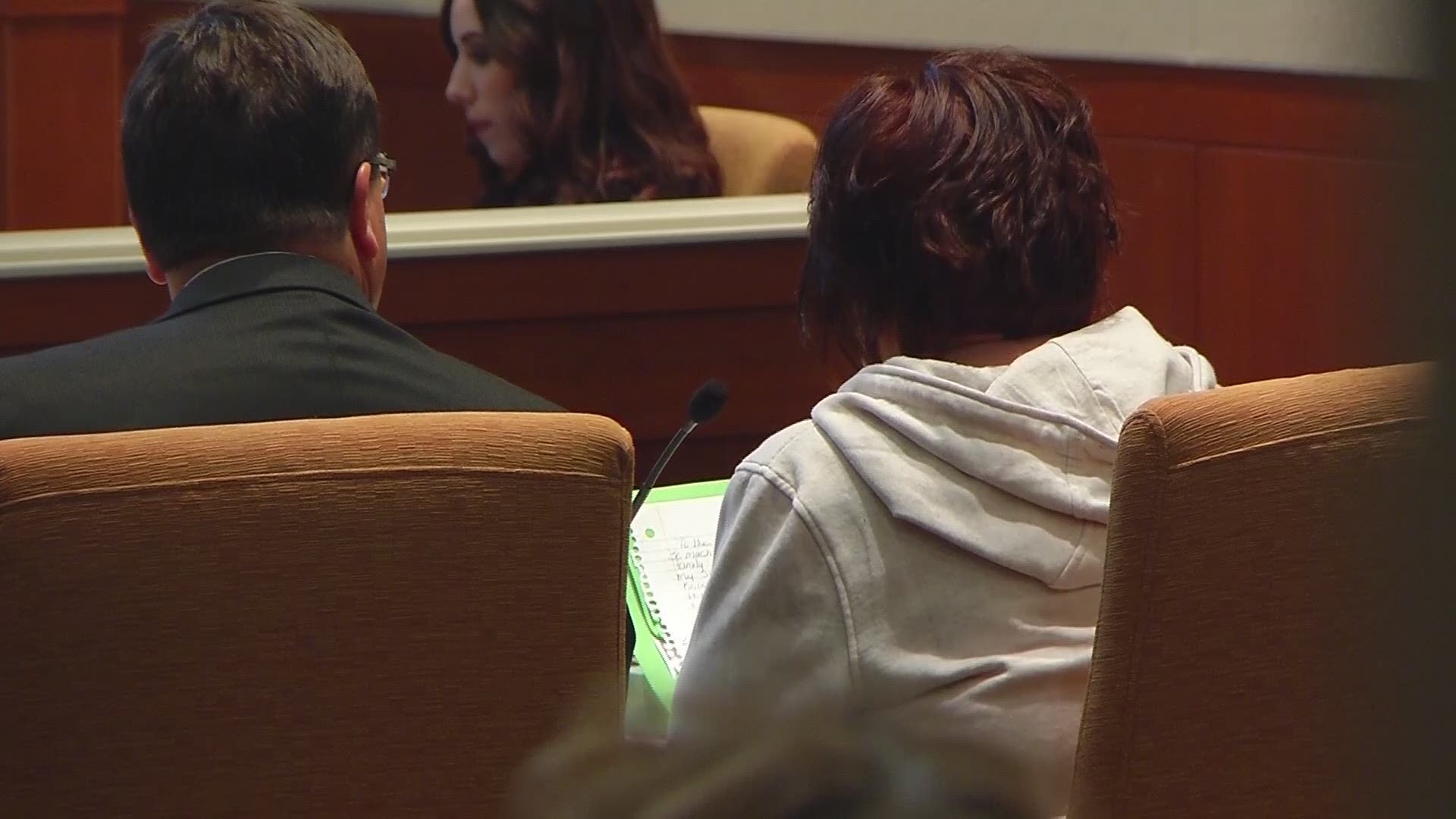 "I will go on to do great things in my life, but he will not," Jayme's statement continued. "Jake Patterson will never have power over me."

She said she thinks Patterson needs to stay locked up "forever."

RELATED: From missing to found alive: A timeline of the Jayme Closs case

Jayme's family members spoke at the hearing as well.

"You took so much from Jayme. You took her parents, her home, her childhood and her happiness," said Lindsey Smith, Jayme's cousin.

"Thank God, after 88 days, we got answers," said Kelly Closs Engelhardt, James Closs' sister, after describing the ordeal. She credited Jayme for those answers.

"She saved our family, she put the pieces together. And now we need to move on," she said. "We have to go to sleep at night knowing that our niece is finally safe and that nobody else can be hurt."

RELATED: Sheriff: Jayme Closs taught us to 'never give up hope'

After the family statements, Barron County District Attorney Brian Wright gave a graphic description of Patterson's crime in court, going step by step through the murders and kidnapping. He painted a picture of Jake Patterson's character, using Patterson's responses to a letter KARE 11's Lou Raguse sent him while he was in prison. In that letter, Patterson called his reasons for doing what he did "complicated." Wright said the letter shows no signs of remorse.

"Nowhere in the defendant's answers to Mr. Raguse's questions will you find him expressing any remorse for murdering James and Denise," he said. 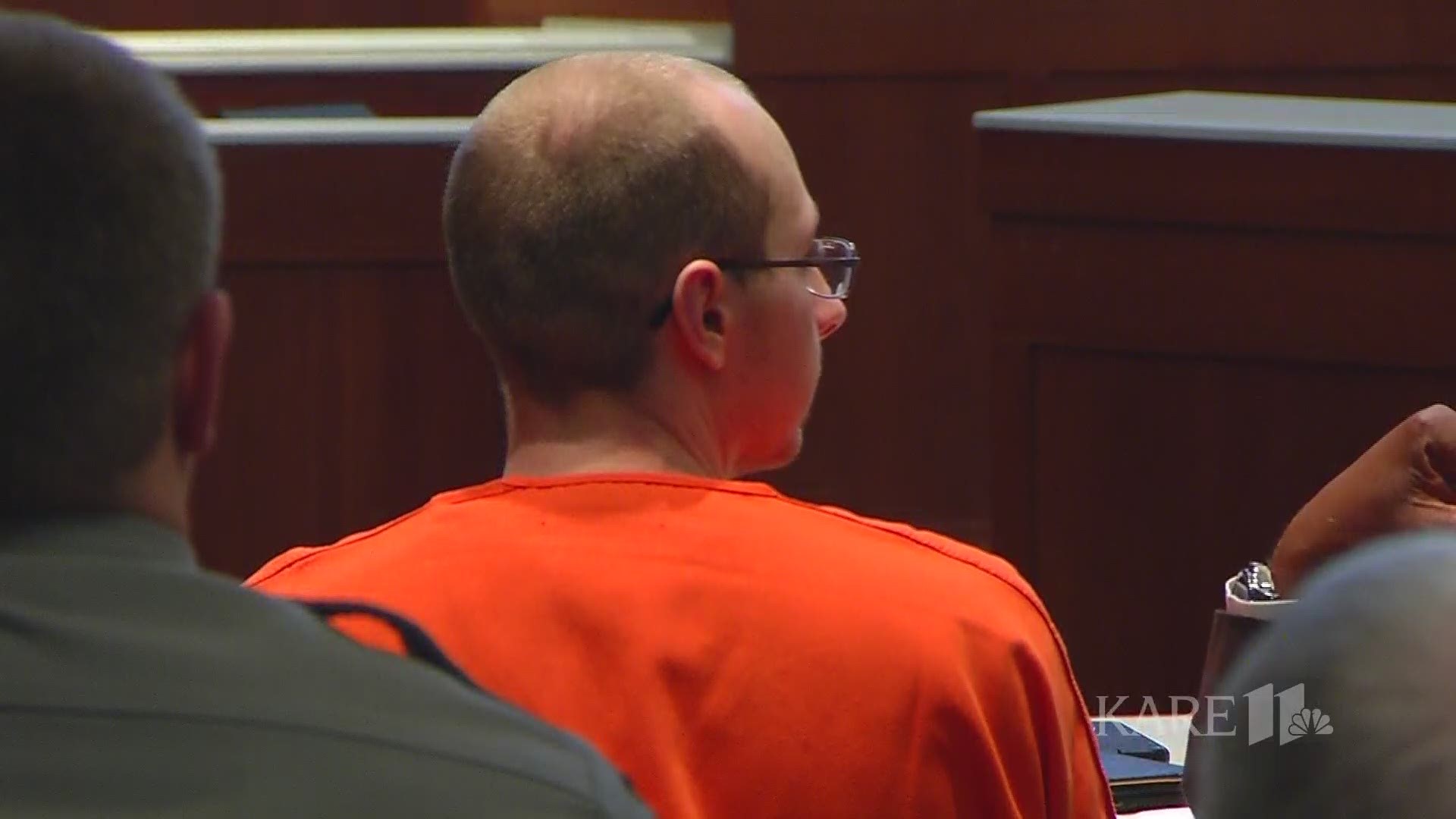 "The impact of what he did will never go away for Jayme and for the families of James and Denise, some of whom you have heard from today," Wright continued.

Wright wrapped up his argument by saying, "Jayme should not have to spend one second of the rest of her life having to worry about the defendant being free."

RELATED: 'I can’t believe I did this' | Accused Jayme Closs kidnapper writes letter from jail

"Mr. Patterson knows and has accepted that he is going to die in prison," Glynn continued. "And hasn’t asked us to argue for anything else.”

Glynn said that Patterson's isolation led to his crimes, and that he has rehabilitative needs. He said Patterson saved the families the "agony" of a trial, thanks to his guilty plea.

RELATED: Complaint: Patterson chose Jayme Closs at random after seeing her get on bus

Ahead of his guilty plea, Patterson said in the letter to KARE 11's Lou Raguse that he planned to plead guilty. “I can’t believe I did this,” he wrote at that time.

Patterson took a plea deal in Barron County that included an agreement that additional charges would not be filed in Douglas County, where Jayme was held. An additional charge of armed burglary was also dropped as part of the deal.

The crimes to which Patterson confessed began early the morning of Oct. 15, 2018, when deputies arrived at the Closs home in Barron, Wisconsin, to find Jayme missing and her parents fatally shot. A nationwide effort to bring Jayme home commenced over the next three months, but after 88 days in captivity, it was Jayme herself who found a way out.

On the afternoon of Jan. 10, 2019, she escaped from the cabin where Patterson was holding her, found a woman walking her dog, and asked for help. The woman took her to a nearby home and asked the owners to call 911. 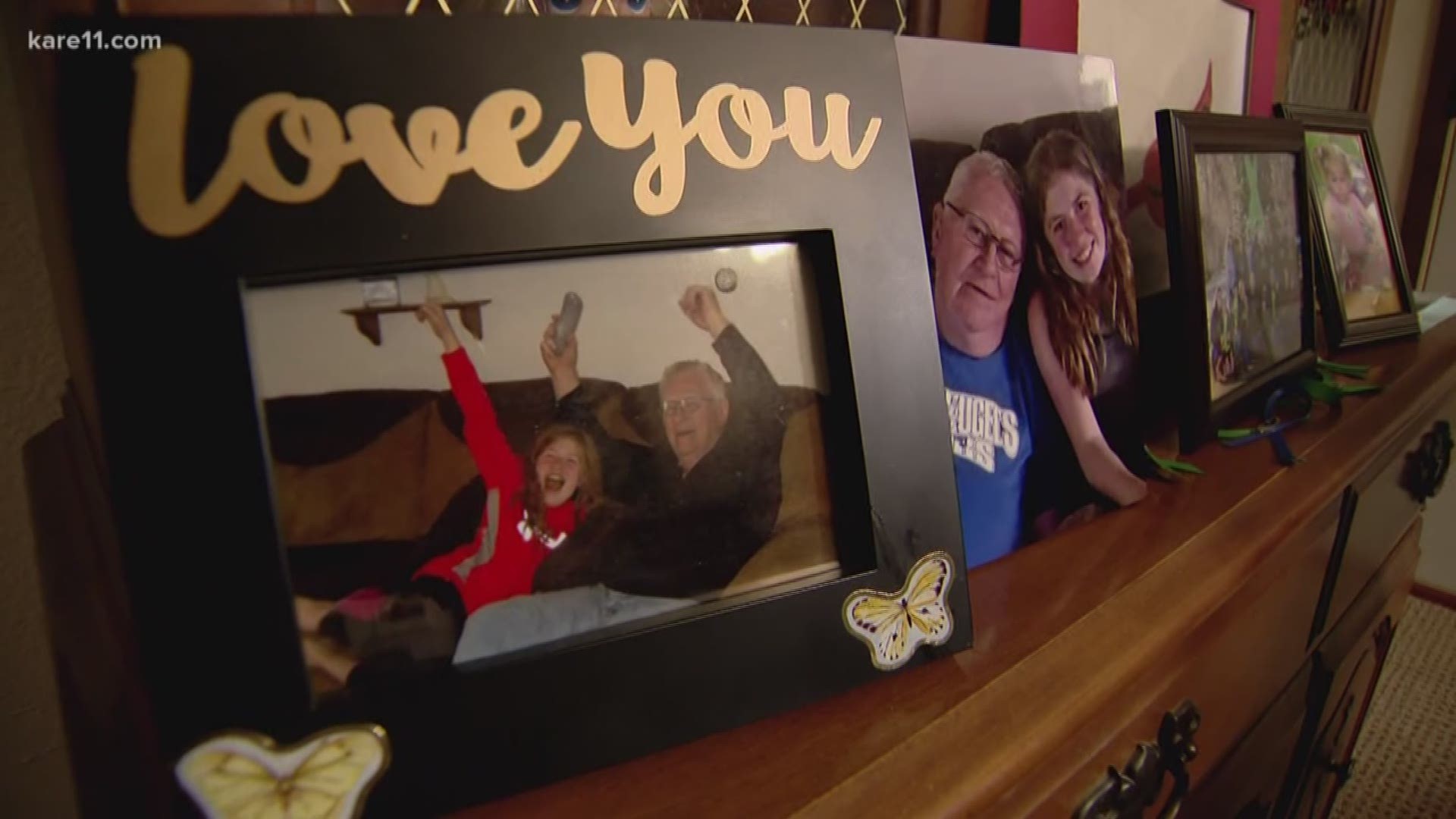 Patterson was arrested shortly after, driving around the area. He told deputies at that point, “I did it,” according to the criminal complaint.

He was charged in Barron County days later. The criminal complaint states that he told investigators he chose Jayme at random after seeing her get on a school bus in Barron. "He knew that was the girl he was going to take," the complaint said.

According to the complaint, Jayme told investigators that Patterson held her at a cabin in Gordon, Wisconsin for 88 days. She was kept underneath his bed, blocked in by plastic totes and weights, and threatened that bad things would happen if she tried to get away. She described Patterson striking her with an object once when he became angry.

One day, though, on Jan. 10, Patterson told Jayme he would be gone for five or six hours. She pushed her way out from under the bed, found a pair of Patterson’s shoes, and left the house to find help.

Jayme was recently honored as a “Hometown Hero” by the Wisconsin Assembly. She also received the reward money designated for her “rescuer” from Jennie-O, where her parents had been employed.

At a news conference after the sentencing, Jayme Closs' aunt, Jennifer Smith, said: "I can tell you she has made a great deal of progress… Jayme will likely have more to say in the future."