James Schweikhard says he isn't used to getting help from police. 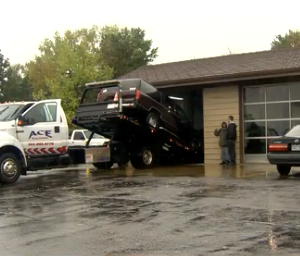 LAKEWOOD - James Schweikhard says he isn't used to getting help from police. The 41-year-old moved to Colorado from Oklahoma in August with his 10-year-old daughter.

"I packed everything up that we own in the truck and there and we just drove here," he said. "It was more of a risk staying in Oklahoma. I couldn't get a job for anything, couldn't get a place to live."

Since August, the two have been living in the Suburban but Schweikhard's 10-year-old daughter was going to school.

And it was the school that called Lakewood Police recently, because they were concerned the girl was living in a car.

"I'm not used to getting help from cops," Schweikhard added.

By then, the family's vehicle (and home) had died. Because he couldn't drive, Schweikhard lost his job. But continued walking his daughter to school.

Lakewood Police connected the father-daughter duo with a shelter, where they've been staying the last two days. Ace Towing took the broken SUV to Sun Valley Automotive Thursday, both companies are donating their services.

"Feels really different to help someone who you know is down on their luck," said Jere Burton, Sun Valley Automotive owner.

Schweikhard is ever so grateful, relieved and surprised that strangers came through for him and his daughter. "I think it's awesome, I think it's really cool, very unexpected, but very cool," he said.

His first contact with a Colorado police officer was in Limon, when he ran out of gas and the officer there helped him out.